British pavilion, Milan: Get the buzz

Much of the site of this year’s British pavilion in Milan will evoke the spirit of British landscapes. But its crowning achievement will be a gigantic recreation of a beehive 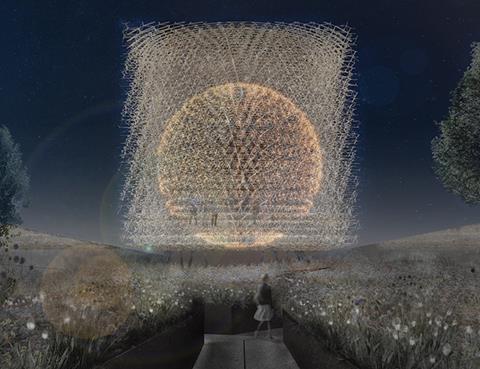 Five years ago at the Shanghai Expo many concluded that the British pavilion was the sensation of the event. Held every five years and derived from the Great Exhibition of 1851, world expos are vast international trade shows during which each participating country constructs themed pavilions which showcase the very best of their nation’s technological, artistic and cultural achievements.

The 2010 British pavilion was a stunning piece of organic, illusory sculpture designed by Thomas Heatherwick. With its 60,000 translucent rods protruding like fur from the pavilion’s core, the “Seed Cathedral” as it was known masterfully combined visual spectacle with engineering ingenuity and emotional impact to create one of the most memorable pavilions of modern times.

Heatherwick’s contribution will be a tough act to follow but the team behind this year’s British Pavilion insist that the new design is more than up to the task. The 2015 Expo will be held in a Milan this summer on a 1 million m2 site. 147 countries will be participating and up to 20 million visitors are expected to attend. The theme will be the challenge of how to feed the world’s growing population.

This year’s expo will also be the first expo held in Europe since a lacklustre and financially unsuccessful effort in Hanover 15 years ago. Were this not enough to raise the stakes, the team manufacturing this year’s pavilion, Stage One, were also responsible for fabricating Heatherwick’s blossoming Olympic Cauldron which was dramatically unveiled at the London 2012 Olympic Opening Ceremony and was also the subject of rave reviews.

The 2015 pavilion has been designed by artist Wolfgang Buttress with BDP providing architectural input and all working in close collaboration with Stage One. The theme of this year’s pavilion is “Grown in Britain” and it comprises five main parts covering 1,910m²: The Orchard, the Meadow, the Terrace, the Architectural Programme and the Hive. 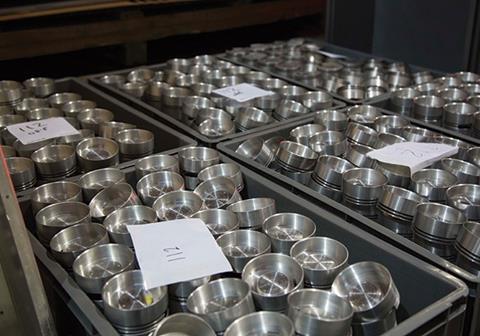 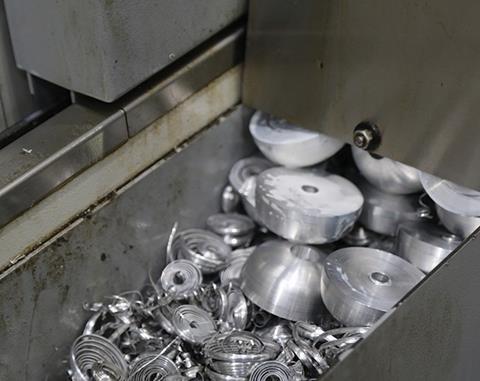 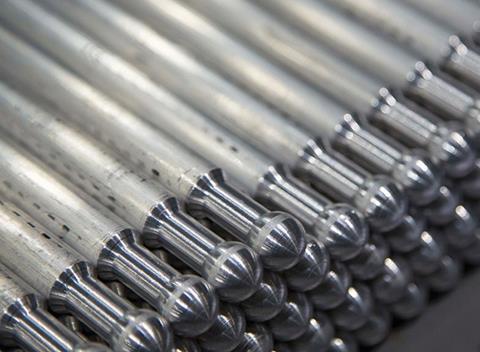 The Hive is constructed from 115,000 aluminium components which are individually numbered for assembly

Much of the pavilion site will evoke the spirit of traditional British landscapes and offer experiential interpretations of their ecological and environmental characteristics. But the highlight of the pavilion in both conceptual and engineering terms will undoubtedly be the Hive.

The Hive will be an extraordinary 14m x 14m x 14m three-dimensional cuboid latticed honeycomb structure supported on 3m high columns. Its centre will be hollowed out to form an accessible spherical void in which visitors will be able to experience the life of a bee colony. This sensory experience will be delivered in three different ways, visually, acoustically and by tactile means.

Audio-visual devices embedded into the lattice-work structure will enable it to pulse and buzz in accordance with signals received from a real beehive back in the UK. But most ambitiously, accelerometers, which measure G-force, will measure the vibrational activity of the UK beehive and transmit this as signals which will be fed into an array of LED lights also embedded into the lattice-work. The lights will then glow and pulsate enabling the structure to provide a direct and dynamic visual representation of the activity of the bees, rather like how a graphic equaliser visualises audio signals in music. 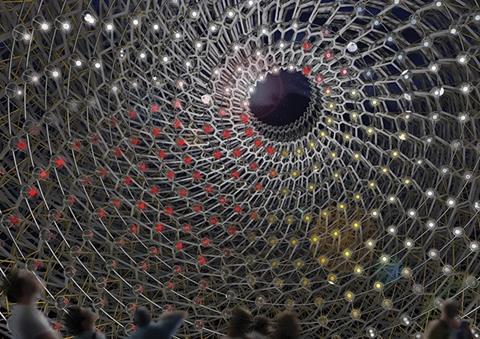 A visualisation of the Hive interior

The essential ecologically productive role played by bees and beehives in our ecosystem is the obvious metaphor that enables the pavilion to address the expo’s wider environmental ambitions. But the British pavilion aims to convey this theme by providing sculptural, visual spectacle that offers a powerfully symbolic and immersive sensory experience.

How then is this ambitious concept being delivered and built in reality? This is where Stage One comes sharply into focus. They are building the Hive in the series of industrial hangars that comprise their factory just outside York. As the name suggests, when Stage One was first established 25 years ago they primarily built sets and scenery for theatres and live productions.

But they have evolved into a multi-faceted fabrication operation that harnesses artisan-inspired and organically-driven engineering technology to create all manner of installations and pavilions for various forms of architectural, artistic or entertainment events. As well as the London 2012 Olympic Cauldron and this year’s expo pavilion, their previous portfolio of work includes the 2014 Sochi Olympics and every Serpentine Gallery pavilion since 2009.

But the complexity of the Hive’s ambitious structure presented an altogether new set of technical challenges. The Hive is constructed from 115,000 individual aluminium components horizontally stacked over 32 layers. When stacked together over 14m, these layers form its “honeycomb”. Each layer comprises flat aluminium spandrels cut into a zig-zag or concertina shape. The aluminium arrives in Stage One’s factory in large flat sheets before it is laser jet or water jet cut to form its final shape. As marketing director Tim Leigh explains, “aluminium provides the strong, lightweight structure the Hive needs and it was the only material we considered from the start”.

Each layer of the aluminium spandrels is connected to the layer above by an intricate network of slender aluminium rods and nodes that combine to give the Hive its skeletal, filigree appearance. The principle therefore is similar to that of a giant Meccano set, a complex, articulated metallic comprised of a series of nodal joints and connections.

The spherical void in the centre of the hive honeycomb is formed by an opening at the centre of each aluminium ring layer successively enlarging or reducing as they are stacked on top of each other. The sphere is crucial to the Hive concept as people will be able to walk inside it and experience the sensory representation of a beehive it aims to provide.

This will be most powerfully delivered by the LED lights embedded into the aluminium node components that form outer edge of the sphere right in the middle of the honeycomb lattice work. These are the LEDs that will be connected to the accelerometer and will glow and pulsate in accordance with the activity of the beehive. When all the lights are on at full brightness the light levels in the centre of the Hive will reach an incredible 4,000 watts. 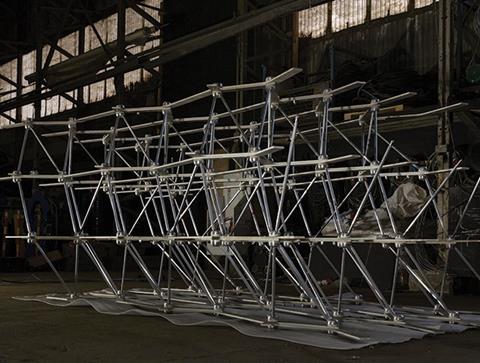 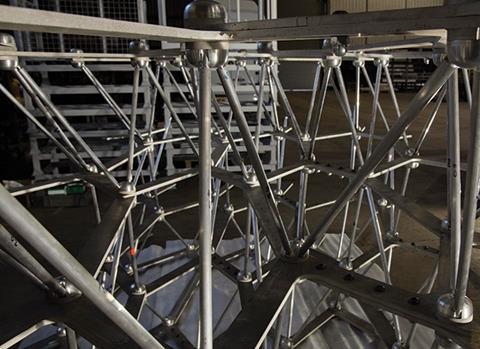 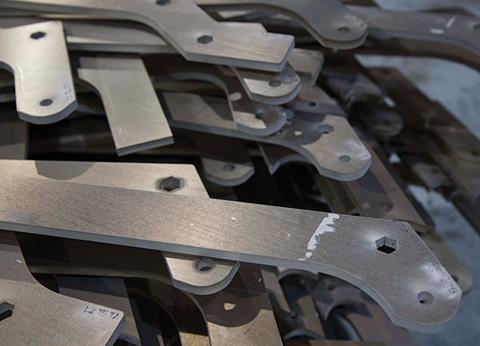 The total fabrication period for the Hive will be four months. As the Hive is being built in Yorkshire but assembled in Milan, each of its 115,000 individual components are carefully numbered before essentially being flat-packed into lorries and driven to Milan.

Although Stage One are familiar with the complexity of large-scale installations and structures such as this year’s British pavilion, as senior project director Adam Wildi explains, the Hive presented a particularly unique set of challenges. “Expos are a monumental undertaking at the best of times. There’s always a rush for the infrastructure to be completed on time and facilitating possibly hundreds of countries all working on the same site can be hugely challenging.”

Despite the fact they’re building an intricate, unique and temporary structure, all the usual regulatory measures that apply to other buildings, such as fire safety, proximity to neighbouring buildings and internal temperature requirements, still apply. There is also an array of Expo-related planning and statutory jurisdictions that need to consulted for approval, and although the Expo opens in May, it has to be handed over at the end of March for test events to take place.

Wildi also reveals that Stage One were in the potentially precarious position of being appointed to build the installation before a design had been selected which essentially meant that had no idea what they had signed up to build. This did however present a key advantage.

“We were able to offer our input right from the start and through the short-listing process, which meant that the final chosen scheme had already benefited from a process of collaboration and refinement which has continued right through fabrication.”

But despite the unorthodox nature of the project, Wildi points out that another key challenge was one familiar to construction projects everywhere - costs.

“Yes, we had to provide value for money and with fixed costs this was a constant challenge. The government is our client and in an age of austerity they’re hardly, rightly, going to be extravagant. But as with any project, you can’t sacrifice integrity for cost and we feel we were able to add value by delivering something special within the client’s cost parameters.”

Wildi’s closing comments are particularly revealing and pertain to the unique opportunities presented by temporary architecture and an enlightened client.

“It’s a completely different approach to that adopted for permanent architecture. Here, everything’s ephemeral. But that sometimes means that by adopting the interpretative, sensory devices we’ve introduced here, you can have a greater emotional impact on the visitor,” he says. “This prioritisation of visitor experience is something the client drove from the start and we believe we’ve created something that will deliver a memorable emotional experience. And, like the London 2012 Olympic opening ceremony, it will have something of that British quirkiness about it too.”