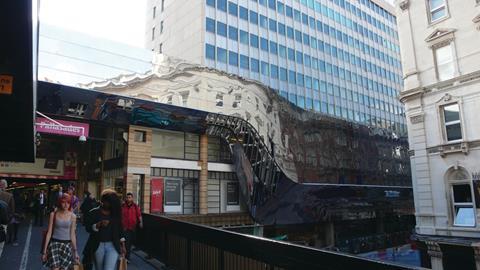 Birmingham New Street station is being transformed by a curving steel cladding system, but attaching such an instantly iconic facade to an existing frame has thrown up a variety of structural challenges

The most striking expression of Birmingham New Street station’s extensive refurbishment will be the exterior. It will be transformed from a sixties car-park-style, faceless concrete box into a curvaceous, mirrored entrance to the UK’s second largest city.

Charles Valla, project architect for AZPA, says a key factor behind the design was that the building had no windows, eliminating the architectural potential offered by views in and out through glass. The decision was therefore made to use the building as a mirror for the city. “It is an iconic image of Birmingham as a city and a high-profile project for Network Rail,” he says. “The building becomes a reflection of the city - the people, the public realm,

the railway tracks below and the blue skies above.”
This “mirror” is being realised by attaching a steel frame supporting stainless-steel panels to the building structure. The lower panels are angled outwards from the structure and kick back in again towards the top to reflect the ground and sky.

This created a number of challenges. First, there were doubts over the ability of the building to take the loads imposed by the facade - the large building includes four movement joints, and the facade needed to be able to absorb this differential movement. Second, there was the risk of the shiny stainless steel dazzling train drivers approaching the station. And on top of this, the facade also features concave areas with the same potential to focus the sun’s rays onto nearby objects that afflicted London’s Walkie Talkie tower earlier this year.

Atkins was appointed by Network Rail as lead engineer on the project, with AKTII responsible for the facade. Atkins carried out a global stability analysis of the building structure, which threw up an immediate concern. “Atkins advised that the only way the building could resist the loads imposed by the facade was to close up the movement joints, which would have caused massive disruption and cost,” says Steve Toon, AKTII’s design director.
Atkins was understandably cautious, as it is difficult to fully assess the structure once it has been closed off in a finished project. Toon, however, decided to go back to first principles by trying to understand how the structure was originally designed - “to get inside the heads of the guys who designed it,” as he puts it. This back-analysis exercise convinced AKTII that the movement joints didn’t need closing off, and gave Network Rail enough confidence to question the global stability analysis. Atkins carried out a similar exercise to AKTII and agreed with its findings.

This approach meant the new facade had to be capable of absorbing the building’s differential movement. It also had be able to handle thermal movement, as the all-steel facade will expand and contract independently of the concrete building. Additionally, the slabs were so weak that all vertical loads had to go through the columns, which are spaced at 9m centres.

The primary steelwork consists of vertical columns fixed at 3m centres. This steelwork kicks out towards the middle of the facade and back in again at the top to create the angled surface for the stainless-steel cladding.

The Building becomes a public reflection of the city - the people, the public realm, the railway tracks below and the blue sky above

Vertical loads from the steel members between the columns are transferred to those attached to the columns by a truss arrangement, keeping the weight of the structure down. Horizontal loads can be transferred into the slabedges. Two columns are placed immediately adjacent to the movement joints with the cladding fixed independently to these, thereby allowing for differential movement.

Horizontal steel rails are fixed to the primary steelwork. These have slotted holes that accommodate longitudinal thermal movement of the facade. A secondary aluminium frame is attached to the steel to support the cladding panels.

More than 5,000 stainless-steel panels will be used to clad the building, with 70% of these unique in size. Computer modelling was used to determine the panel sizes and to cut the panels on the production line. A full-sized prototype was built to verify the design - this proved to be an invaluable design tool that was used to determine the fixings solution and the thickness of the metal to make it easy to bend to shape. The stainless-steel roll size of 1.25m determined the panel width - length varied from 1.8m up to 5.1m.

The panels are single-curved and are bent to shape when fixed to the frame. Some have stiffeners on the rear to help hold their shape. A fixing solution was needed that could be applied from one side only - Network Rail would not accept rivets as these would need regular inspection. Instead, a special bolt fixing that can be tightened from one side is being used. The panels overlap where movement is an issue.

The trouble with a shiny cladding system is glare, particularly if it dazzles train drivers. Panel reflectivity modelling revealed this was a potential problem on the west side of the station. Valla explains that there are three ways of countering glare: make the panel surface non-reflective; block the sun with a shading solution; or alter the geometry of the surface of the panels. “The latter is the most tedious option but the one we as architects opted to take,” he says. 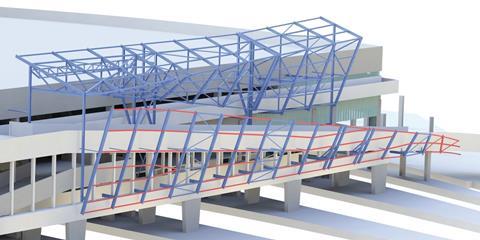 The decision to create a shiny curved facade has, however, opened up the possibility of a Walkie Talkie scenario during hot weather (in September, the concave shape of the London tower concentrated the heat of the sun onto parked cars, thereby melting plastics). “Most of the facade is convex,” says Valla, of Birmingham New Street.

“We recognise there are some concave areas so we are considering how to deal with this.”

He emphasises that the problem was identified before the issue affected the Walkie Talkie, but says a solution has yet to be finalised.

The cladding is being installed by Portuguese specialist Martifer. It has completed the north side of the station, which was relatively straightforward as this elevation is flat.

It has now started the north-west side, and will follow this with the east and south elevations. The project is scheduled for completion in 2015, when its curving mirrored facades will rival Mecanoo’s recently opened, filigree-clad Library of Birmingham as the most striking manifestion of the city’s rehabilitation.