The Alan Cherry Debate 2012: Design quality in an age of austerity

How can construction professionals deliver well designed homes that don’t cost a fortune? A high-profile panel including Lord Rogers and Nick Raynsford, and joined by communities secretary Eric Pickles, tackled the issues at the annual Alan Cherry Debate

Everyone deserves a roof over their head and a place to call home. Staying safe, warm and dry is one of the most basic of modern human requirements. But the bare minimum isn’t, and shouldn’t be, enough in the future according to some of the industry’s leading design, housing and planning experts - no matter how tough the economic climate.

This year’s debate, hosted by Building Magazine and Countryside Properties in memory of the late Countryside founder Alan Cherry, focused on homes design and whether it is possible to satisfy demand for quantity without sacrificing quality.

Just two days before the debate, the latest Office of National Statistics (ONS) GDP figures were released, reporting a slip back into a double-dip recession and construction output reportedly contracting by 3%.

While the panellists clashed throughout the morning on a number of issues, there was one they all agreed on - that good housing design should be upheld and delivered, no matter what.

Everyone in this room will accept we are living in very tough times indeed. But the built environment is what we are. It represents us

As BBC newsreader George Alagiah took to the stage to kick off the debate as chair, it became quickly apparent that this was a subject close to his heart: “Everyone in this room will accept we are living in very tough times indeed. But the built environment is what we are. It represents us. It’s an important lesson to learn and to remember.”
Keith Bradley continued, saying that good design is sometimes wrongly considered a luxury when it should be viewed as an essential: “design is not superficial,” he said. “It is not an add on. It’s about getting the basics right, it’s about promoting equality and it is about sustainability. We only have one planet. And if we continue to live the way we live now we will need three. And America will need five. So unless you happen to know where we can pick up a couple of planets, we need to change the way we live, design and build.”

David Lunts agreed that hard times “should not be an excuse for cutting corners in design” rather we need to find a way “to build efficiently and leave how to change the public realm for as little money as possible.”

British design should be about great homes, great neighbourhoods and great urban spaces

Eric Pickles said: “British design should be about great homes, great neighbourhoods and great urban spaces. Over the last few years UK housebuilding and design has been littered with hundreds of standoffs between developers and local residents. We need communication to make sure this stops.”

Lord Rogers added that sacrificing design was not an option, and we should be collectively ask why England, in his opinion, has “consistently produced the poorest design in housing in western Europe.” He went on to surprise delegates by lending support to the National Planning Policy Framework (NPPF), something he admits he has been “horrified” by in the past. “The good news on this was that government accepted it had to be improved,” he said. “Did you know that 35 criticisms were made of it and 30 have since been addressed, which I find very interesting.”

Nick Raynsford’s main point was that good design need not be extravagant, something he believes is a common misconception and one that could stand in the way of design being considered a realistic goal. He pointed to the velodrome on the Olympic park as an excellent example of low cost, highly efficient and sustainable excellence. This was welcomed by fellow panellists and delegates alike, prompting a murmur of agreement throughout the room. He added: “that project is proof that you don’t need to spend squillions of pounds to create good design.

“Similarly with housing, it doesn’t need to be a case of dumbing down. Greenwich Millennium Village is an example of brilliant semi-rural design in London. I know because I live there.”

David Lock had something to add on the logistics of the Greenwich scheme: “Whatever lovely life Nick is leading, I think that site should have been left to the wildlife rather than made into a place to love for a few highly subsidised individuals. It cost millions more to clean up the contaminated land on the site. It just wouldn’t be viable today. The real problem here is that current civil leadership is so poor and no one in town halls will take responsibility.”

Lock added that the role of a designer should be simply “to service place and people” and that architects “left to their own devices lose the plot “.
Controversial words indeed. Especially with two architects on the panel. Bradley had plenty to say in response: “There are good architects and bad architects, good planners and bad planners, good clients and bad clients. You can’t generalise.”

Alagiah steered the debate to what the panel thought about standardisation as a tool to design in quantity, economically, without compromising quality. Bradley added it could be “a good challenge and discipline for architects”.

Rogers moved the debate on by adding that innovation needs to be a key part of successful homes design: “there is very little innovation in housing design at the moment. There are a number of dwellings in London, for example, that look back from the Thames which I find amazing.”
So what is the solution to all of these problems? Better civic leadership perhaps? Certainly Lock thinks so. But Bradley had other points to raise: “there needs to be more access between people and government and designers and planners,” said Bradley. “People should go and see things together. What works, what doesn’t work. And have a proper dialogue.”

“You have to really work at it,” added Rogers: “but I would say that I think we have done rather well generally. Apart from housing which, as I said at the start of this debate, I think is all very poor in this country. And that’s what we really need to change.”

The Alan Cherry Award for Placemaking 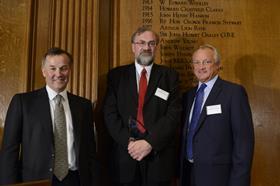 Alan Cherry was passionate in his belief in good design, placemaking and environmental quality. The Alan Cherry Award for Placemaking has been established to recognise the contribution that leading figures in the public sector make to the quality of placemaking in their communities.

Last year, the first award of its kind was presented to David Ubaka, head of design (urban realm) at Transport for London. This year the award was given to Graham King, head of strategic planning and transportation at Westminster City Council. It was presented by Alan’s sons Graham and Richard.

David Lunts said “Graham enjoys an enviable reputation among his peers as a highly intelligent, straight-talking and practically minded professional. His contribution to successful placemaking in Westminster has been enormous - whether with world-class projects like the remodelling of Trafalgar Square, or with creative new policies like Westminster’s affordable housing credits scheme. His passion for getting things done, but always by doing things right, makes him a very a worthy winner of the Alan Cherry Award.”