The tracker: A mixed bag

Construction activity is still in decline, but the situation is better than last month. Experian Marketing Information Services reveals that some sectors and regions are even looking healthy

Construction firms continued to indicate that orders remained below normal for the season. However, at 48 the index was four points above the previous month’s figure and posted its highest reading since August 2008. Tender enquiries rose during the month as the index increased by four points to return to positive territory at 52.

Firms remain downbeat regarding the outlook for employment during the second quarter of the year. The employment prospects index remained in negative territory for a 39th successive month in March, as firms continued to indicate reducing staffing levels over the next three months. However, the index edged up two points to 37. 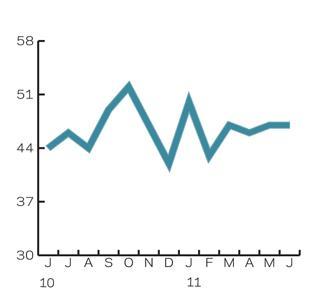 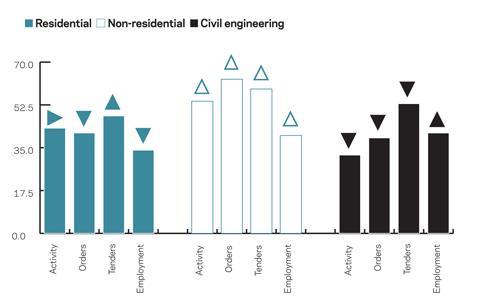 CFR’s Leading Construction Activity Indicator predicts that construction activity will continue to decline over the coming three months. The pace of decline is expected to accelerate slightly in April, before easing in May and the indicator will remain unchanged at 47 in June.
The indicator uses a base level of 50: an index above that level indicates an increase in activity, below that level a decrease.

About one-fifth of residential firms indicated that they had enough work to keep them ticking over for more than six months, an increase from 12% three months ago. Almost 24% of non-residential firms reported a similar amount of work in hand, but the proportion of civil engineering firms indicating the same was much lower at just 13%.

However, half of civil engineering firms indicated that their order book would keep them busy for between three and six months, compared with figures of just 34% and 23% for the non-residential and residential sectors, respectively. 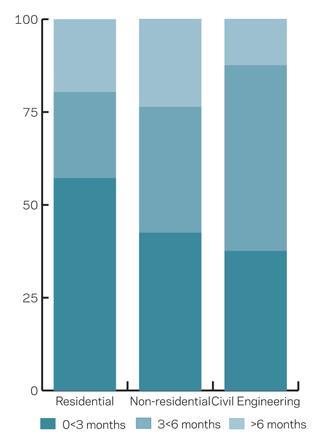 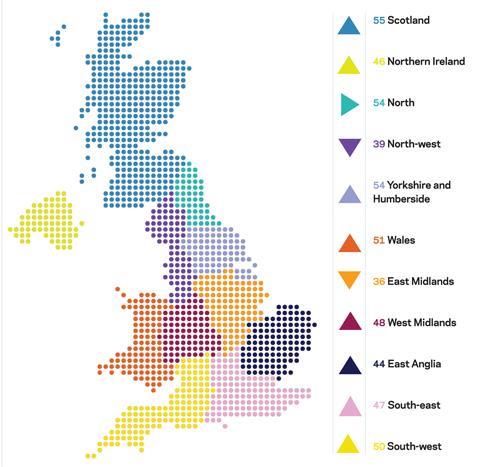 The indices for five of the 11 regions and devolved nations were above 50 in March.

The strongest increase was in Scotland, where the index jumped by 14 points to reach a six-month high of 55. The Welsh index also saw a marked improvement, rising by six points to reach 51. It was the first time that the index had been in positive territory for 11 months.

The West Midlands and East Anglia bothsaw five-point increases, but remained below 50 at 48 and 44, respectively. The index for the South-west rose by four points to reach the no-change mark of 50.

The East Midlands and the North-west were the only two regions to see a decline in their indices, with each falling by two points. The East Midlands index posted 36, its lowest level since January 2009 and the weakest of all the regional indices. The North-west index reached a seven-month low of 39.

The index for the UK, which includes firms working in five or more regions, rose by six points to reach a 37-month high of 62.