The ONS might have recorded a rise in output, but figures record a continuing gentle decline …

The 6.6% rise in construction output in the second quarter that was reported by the Office for National Statistics was not supported by the latest findings from Experian’s monthly construction contractors survey. The activity index for that remained stable at 44 in June, below the no-change mark of 50, indicating a further contraction in activity. However, the survey has a bias towards smaller companies, which might lead to a more negative viewpoint than would otherwise be the case.

Clients’ interest in procuring construction work rose in June compared with May, but the level of orders remained below normal for the time of year. This was indicated by the tender enquiries index, which held steady at 51, and the indicator for orders stayed below 50 for the 24th consecutive month.

Insufficient demand continued to be an obstacle for 54% of the survey participants in June. Lending conditions also remained tough: 17% of participants indicated that finance was a problem.

Meanwhile, those citing “other factors” as an activity constraint held steady at 3% in June, while bad weather and shortages of labour, materials and equipment was not an issue for any of those surveyed. The remaining firms (25%) suggested that there were no constraints on activity levels, a small decrease from 27% in May. 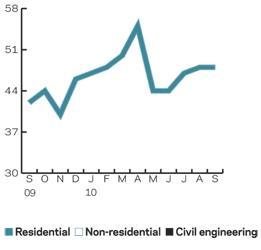 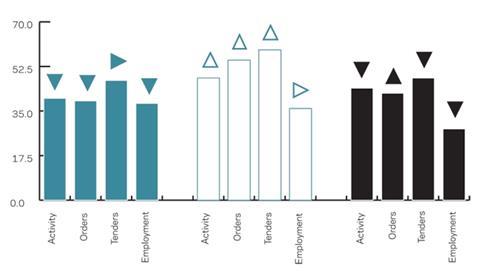 The CFR’s Leading Construction Activity Indicator predicts another difficult quarter for the industry. However, the pace of the decline should ease in August as the index edges up to 48, before stabilising in September.

The indicator uses a base level of 50: an index above that indicates an increase in activity, below that level a decrease. 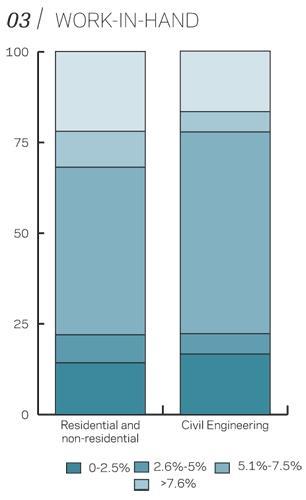 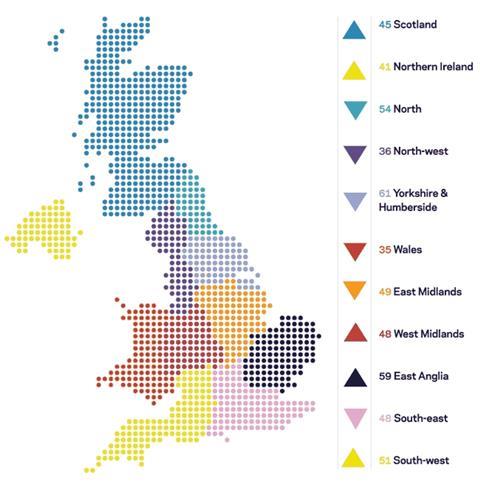 The North-west index remained below the no-change mark of 50 for the 29th consecutive month in June, having fallen by a point to 36. The figure for Yorkshire and Humberside also edged down a point to 61, but it still remained the most buoyant region in the UK.

The North and East Midlands’ indices fell four points in June, with the latter going below the 50 mark for the first time since December. However, the former remained in positive territory (54).

The steepest decline compared to other regions and nations in June was with Wales’ index, which fell eight points to 35, its lowest level in 18 months.

The indices for the remaining two devolved nations - Scotland and Northern Ireland - rose by one and three points respectively, although the out-turns for both were below 50.

The UK index, which includes firms working in more than five regions, edged up a point to 55.

Experian’s regional composite indices incorporate current activity levels, the state of order books and tender enquiries received by contractors to provide a measure of the relative strength of each regional industry.

This report was compiled by Experian Business Strategies