The industry was badly affected by the winter weather and construction activity is expected to continue to decline through the start of 2011. Experian Marketing Information Services reports

Following last month’s return to expansion, the construction activity index declined by three points to 49, taking it below the no-change mark of 50 for the sixth time in the past seven months. Activity declined across all three sectors in November, with the residential sector particularly weak. The residential activity index dropped by 10 points to 44 and the non-residential index declined by three points to 49. The civil engineering sector saw some improvement in its index but still remained in negative territory at 47.
Companies continued to report that orders were below normal for the time of year, as the orders index remained unchanged at 46. The index has been in negative territory in each month since June 2008. In contrast, firms reported that tender enquiries increased during the month, as the index rose by four points to 52. The tender enquiries indices for both the non-residential and civil engineering sectors were particularly buoyant in November, rising by 13 points and 21 points, respectively, as both posted 61.
There was a marked change in the factors constraining activity in November. Unsurprisingly, the proportion of firms indicating that bad weather was a constraint rose significantly during the month, from just 3% in October to 28% in November. Just one-fifth of firms indicated that there were no factors constraining their activity, the lowest proportion since January 2010. Lack of demand was reported as a constraining factor by 30% of respondents. This was the weakest proportion since December 2007 and most likely reflected other factors, such as adverse weather, becoming more of an issue.

According to CFR’s Leading Construction Activity Indicator, construction activity is expected to continue to decline over the coming three months. The pace of decline is projected to have accelerated slightly in December before easing at the start of 2011. 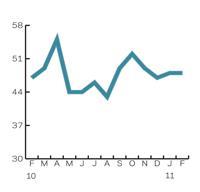 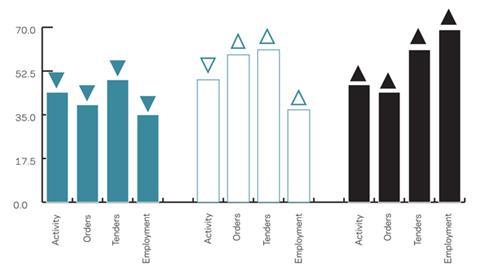 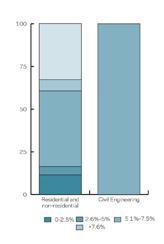 Six of the 11 regions and nations saw an increase in their indices during November. The strongest rises were for the North-west and Northern Ireland, which each saw an increase of four points to 45 and 40, respectively. East Anglia’s index rose by three points to a six-month high of 55 and the index for the North posted 53, two points above the previous month’s reading.

Scotland’s index declined dramatically, dropping by eight point to 42, its lowest reading for 13 months. The West Midlands’ index fell by three points, and there were one point declines for the South-west, Wales and Yorkshire and Humberside.

The index for the UK, which includes firms working in five or more regions, posted 55, three points higher than October’s reading. 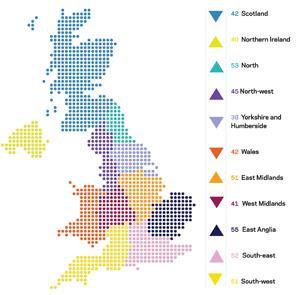