Who’s thriving and who’s merely surviving this year? Our interactive tables reveal all … 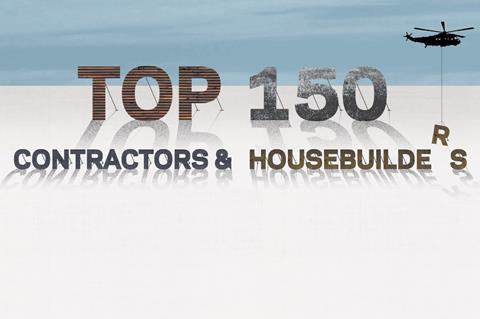 This year’s Top 150 Contractors and Housebuilders report reveals that the severe belt-tightening that firms have been carrying out in recent years is yielding results. Our top 150 firms, ranked by turnover, have seen a rise in their collective top line, of about 8% over the past year, accompanied by a whopping 75% increase in pre-tax profit, amounting to almost £2.3bn.

Yet this year’s rankings are also marked by the glaring absence of some big names, including Doyle Group and the 150-year-old Killby & Gayford, which both failed in recent months. And redundancies continue to blight the industry - even this year’s second-ranked company, Carillion, cut 1,400 jobs in its Energy Services division, emphasising just how tough the past 12 months have been for all firms.

Unfortunately, more pain is to come: Bank of England governor Sir Mervyn King - not usually one given to hyperbole - said at the end of June that the UK economy was in for five more difficult years. Tony Williams, analyst at Building Value and adviser to Experian, says: “We all thought the construction sector recession would last two to three years, but now we are looking at more than that, with some even forecasting a lost decade.”

So with the construction downturn now set to last longer than feared, are contractors and housebuilders doing enough to survive, or are new strategies needed for the next phase of the “no growth” era?

Analysis of the top 150 shows that the leap in profit of the companies as a group masks a more complex situation. First, about half of the rise was down to a huge improvement in the housebuilding sector, according to economist Martin Hewes, who compiled the rankings for Building. Housebuilders’ operating margins increased from an average of 6.1% in 2010 (following a low of 2.4% in 2009) to 8.3% in 2011.

Hewes says: “Some housebuilders simply increased profits and others moved from a situation of massive loss in 2010 to not so much of a loss in 2011 - for example, Miller - or profit, such as Taylor Wimpey.”

But for contractors the picture is more mixed. Their collective margins actually fell slightly, from 3.3% to 2.8%. Some have enjoyed profit rises. The sector’s giant Balfour Beatty, which has a helpful amount of business in the US, has seen pre-tax profit rise 22.4% to £246m for the year to 31 December 2011. It has held firm in the top spot, with turnover up 5.1% to £11bn.

Meanwhile, Laing O’Rourke has remained in third position but turnover for the year ended 31 March 2011 was down by 6.2% to £3.3bn and pre-tax profit halved to £25.9m. The resulting margin of just 0.75% follows falling workloads and layoffs in Europe.

The pressure on the sector is shown by how much its markets have shrunk. UK construction output for the second quarter of 2012 fell 5.2%, compared with the first quarter, according to the latest figures from the Office of National Statistics, published in this week. The worst-hit areas were new public projects excluding housing and infrastructure, where output decreased by 22.4%, and new public housing, which was down 22.1%.

The outlook appears equally uninspiring. Experian unveiled downgraded expectations in its latest UK construction forecast, published in July, with the sector expected to decline by between 5% and 6% in real terms in 2012.

This revision was based on the intractability of the eurozone crisis, which is exacerbating private sector funders’ lack of confidence. This, in turn, is compounding the effects on construction of reduced public spending.

Some firms have pointed to potential boosts for the construction economy, such as the conclusion of the government’s review of PFI and the launch of the government-guaranteed mortgage scheme, NewBuy. However, Experian’s Williams is nonplussed: “These things will only help at the margins.” 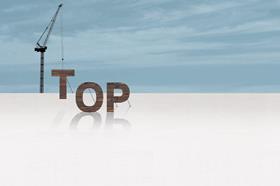 So how to tackle the new “no growth” scenario? One approach may be to sell assets. Hewes says: “Some of the smaller contracting companies with housing arms are tending to withdraw from and sell their property interests.”

Examples include Pochin, ranked 149th in our tables with turnover of £59.3m, which is disposing of its small residential business and concrete pumping division. Also, Robertson Group (67th, £232m) has cut back its previous heavy involvement in developing and housebuilding.

There may also be new niche markets to corner. Noble Francis, economics director at the Construction Products Association, says: “Despite the downturn, there is still £100bn of work each year… and there are sectors that are growing, such as private housing, rail and energy.”

Francis says work can be found in unlikely places. He points to the example of the expanding rail sector. Even if a firm has not worked in rail, it could still reap benefits: “If you do retail fit-outs then rail tracks are a completely different industry. But Network Rail has £35bn to spend between 2009 and 2014 and a considerable proportion of that is not track, but actually retail units for major station refurbishments, a lot of it around the country.”

The development at Tottenham Court Road station alone is a £1bn project, with 500,000ft2 of retail, office and residential space.

Despite there still being some opportunities around, winning work in the current marketplace will be tougher than ever. Williams says: “There won’t be enough work to go around. The capacity issue will mean more firms go bust.”

The first step to surviving is to keep a close eye on your balance sheet. Kevin Cammack, analyst at corporate finance company Cenkos Securities, says more redundancies are likely: “Companies will have to look at their cost bases and many are still carrying a workforce that matches a higher turnover of two years ago.”

Williams adds: “The key is to avoid debt - but even then, you might find yourself with a loss-making contract and there’s little you can do about that.”

However, you can minimise your chances of landing a loss-making job by managing tenders tightly. This is one of the strategies of BAM Construct, part of BAM, ranked 10th in the top 150 with revenue of £1.75bn. BAM Construct’s turnover for the year ended 31 December 2011 was down 9% to £946m and pre-tax profit fell by a third to £11.5m. 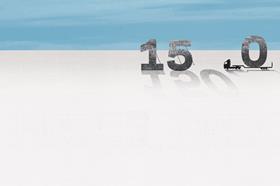 Graham Cash, chief executive of BAM Construct, says: “We have become much more objective in understanding what we are bidding and using more risk management to ensure our bidding is right. It’s more difficult to make a profit in the constrained market but we continue to do so.” As for those firms bidding at loss-making prices, he says: “The suicidal bidders will start to fail.”

Affordable housing and regeneration remain relatively strong. However, to succeed in these sectors you may have to invest your own money.

Paul Sheffield, chief executive of Kier (sixth, £2.2bn), where profit was up 25.6% last year, says: “You must be more than just a contractor. You need a blend of developer, planning and housing skills and you must be prepared to do joint ventures.”

Sheffield is putting this strategy into action on several projects, including a £25m retail park in Sydenham, South-east London, where 100% of the 120,000ft2 of retail space has been pre-let to shops including Dixons and Toys R Us. National Grid owns the land and Kier is doing the building work. When it is completed in June 2013 the two companies will sell the scheme and split the proceeds.

So, just as in 2008, there are ways to stay afloat. And, Cash points out, there is another potential life raft that wasn’t readily available when the first recession hit - building information modelling, or BIM.

“The ability to build though a computer model helps eliminate waste in the industry and that improved efficiency will help us recover,” he says.

FM: Attractive, but how easy is it?

The top 150 companies are building up business increasingly in the repairs and maintenance sector. Their motive is clear: the tables show that facilities management delivers much higher margins than contracting - 5.5% in 2011. For example, FM specialist Mitie has margins of 5.6% - helped by an average wage of just £13,500, the lowest of all the top 150 companies.

No wonder firms like BAM Construct are piling in. Chief executive Graham Cash says BAM’s FM business has annual turnover of about £30m, which he hopes to grow to £100m by 2015. “We have a small business focused on PPP [public private partnership] but we plan to broaden our client list.”

FM work will not be easy pickings, however. Top 150 compiler Martin Hewes says: “Competition in the market is becoming fierce as more companies enter.” Companies like Mitie, Enterprise and May Gurney are pure FM companies with strong records, so they will be tough to beat.

Moreover, as Hewes adds, “profits are by no means guaranteed”. Enterprise made a pre-tax loss of £133.5m in 2010 and a loss of £44.6m in 2011, mainly relating to goodwill writedowns, rather than operating losses.

Tim Lowe, finance director at the 103rd-ranked contractor, says it is due to diversification, including working in riskier markets. Around half of the company’s revenue comes from overseas - mainly Africa. Lowe says: “We are in Sierra Leone and Senegal, doing big civils like access corridors, road works and projects to set up mineral extraction.”

In the UK, the firm’s work is split 50-50 between contracting and civil engineering.

The expansion has come at a price: Dawnus had to borrow £80m last year to support its large, capital-intensive projects. But it is already paying back the loan, which is repayable over 15 years. Lowe says: “We have a good relationship with our bank, yet it is still tough to get finance. We would like to borrow more to take on another big project but they have turned us down.”

Dawnus employs a large number of staff - 400 in the UK and, at peak times in Africa, 1,000. Lowe says: “We don’t subcontract as much as most other firms because this gives better control of costs and quality.”

How are housebuilders really doing?

“A case study in how to tackle recession.” This is how Williams describes the housebuilders’ recovery from 2008, when many looked in danger of collapsing. This has been achieved by cutting debt, developing swaths of unprofitable land bought at pre-crisis prices and, in large part, through the considerable breathing space granted by the banks. But there is more to the story.

The turnaround in housebuilding has been reflected in huge growth in profit. Take Barratt Developments, which announced in July that pre-tax profit for the year to 30 June 2012 was expected to increase by 158% to about £110m. Revenues are also expected to be up, by 14% to £2.32bn, and debt has been almost halved, to £170m.

Mark Clare, chief executive, says: “We are rapidly recovering. The growth is the result of the £1.5bn invested in land since May 2009.”

He adds: “There is constant discussion of the issues with our old landbank [bought at higher, pre-crisis prices] but we have reduced it steadily.” Indeed, these plots have been cut to 6,700, compared with 10,292 in 2011.

However, despite the good news, Williams warns: “Demand remains roughly half of what it was and currently there is too much capital employed and too few buyers. Soon housebuilders will have to put their hands up about this situation.”