Top 150 contractors: Whatever the weather 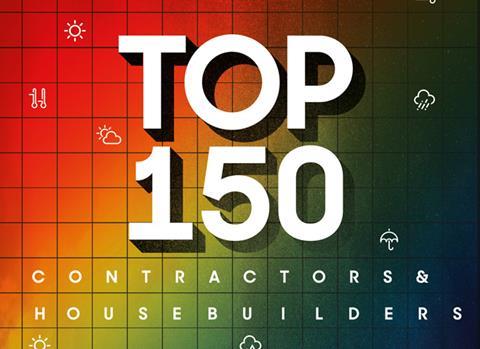 However, while housebuilders are largely debt free and look in good shape to face whatever crazy political and economic mud is thrown at them in the year ahead (see Housebuilders – Strong and Stable, overleaf), for contractors it is only in comparison to the dire performance of the recent past that the picture seems positive. Carillion is still in place as the UK’s second-biggest construction firm by total turnover, but the firm’s profit warning – issued earlier this month, after this data was compiled – casts a long shadow over tables topped by a distinctly unhealthy first tier. Laing O’Rourke too, still the UK’s second-biggest contractor by contracting turnover, remains on the sick bed, joined also this year by fellow top 10 players Kier and Interserve, while Balfour Beatty, reporting a profit margin of just 0.09%, is only slowly convalescing after four years on the operating table.

If these problems can beset the UK’s biggest and strongest firms, then how much more perilous is the market for the smaller players with seemingly less balance sheet strength? And what do these figures say about the capacity for contractors to navigate the inevitable political and economic uncertainties of Brexit and the hung parliament?

First, then, the relatively good news. The turnover of the Top 150 housebuilders and contractors rose overall by 8.8%, from £92.1bn to £100.2bn. With many of the smaller firms outpacing their larger rivals, the average turnover growth for individual businesses was a very rapid 13%. And the growth was not centred just on housebuilders: contracting-led businesses grew at very nearly the same rate. That average also hides stellar performances from individual firms like Winvic Construction, which near doubled in size to a £417m turnover, and Multiplex Construction, which broke the £1bn barrier with 67% growth in turnover.

With many smaller firms outpacing their larger rivals, the average turnover growth for individual businesses was a very rapid 13%

More importantly for the health of the sector, contracting firms saw growth in pre-tax margins. The Top 50 contracting-led businesses reported an average margin of 1.78%, as against the 1.05% reported last year. While this is hardly much to write home about – it only returns margins to where they were in 2014 – it at least shows a sector pointing in the right direction. As last year, it is often the smaller firms that are performing better - where losses from the likes of Interserve and Laing O’Rourke give the top 10 an average margin of below 1%; for those ranked 50-100, the average is nearly 4%.

So, despite all the turmoil and delay of the year since Brexit, it is clear that, for some at least, market conditions have been relatively benign. Rick Willmott, group chief executive of £1.2bn-turnover family firm Willmott Dixon, says his company, which nearly tripled its margin in the last year, has benefited both from its position on frameworks and tighter management of risk. He says: “As a construction sector we haven’t really seen a slowdown in capital projects that we might have expected, and we’ve set a very clear strategic instruction not to bid on anything that doesn’t give us a margin.”

But for many others market conditions, particularly since the Brexit vote and the slowdown in the London housing market, are not seen as so positive. A slight cooling off in demand has meant the clear whip hand held by contractors in negotiations with clients over the last couple of years has in many cases disappeared. Andy Steele, chief executive at £342m-turnover London and South-east contractor Osborne, says: “Life carried on after the referendum, but it noticeably slowed, and took longer to get projects over the line. And some people have started to say now is the opportunity to turn the tables back on the contractors. But overall it’s in limbo – it’s neither a bear nor a bull market.”

One example of how this subtle weakening has affected contractors’ day-to-day business is in procurement. Whereas the rising construction market of the past three years saw a proliferation of two-stage tendering, with clients needing to reassure contractors a job was theirs before being able to get detailed engagement, Steele says the last few months have seen a suggestion of a return to single-stage tendering. “Suddenly single stage is a question again, which could put us in a dangerous place as an industry,” he says, citing the proliferation of below-cost bids on single-stage jobs during the recession.

Uncertainty is the big issue, politically and economically. clients are very uncertain about the future

It might be tempting to see this overall “levelling” in the market as a welcome respite from the soaring price rises of the last two years and the spiralling declines before that. But it shouldn’t be mistaken for stability: uncertainty about the future and potential volatility is great as it’s ever been. It’s more that big negatives risks – Brexit, labour shortages, potential interest rate rises, materials prices – seem temporarily balanced out by positive indications on infrastructure investment and underlying commercial and residential demand. Steve Beechey, group strategy director at contractor Wates, says: “Uncertainty is the big issue, politically and economically. Clients are very uncertain about the future, it’s very hard to know what’s going to happen in policy direction too. It’s making it a very difficult time for contractors.”

2016 was another year of rude financial health for the nation’s biggest housebuilders – however much the UK falls short of providing enough actual homes for its people to live in – albeit not quite reaching the highs of 2015. The top 30 biggest firms pulled in £23.4bn in housebuilding revenue, a marginal uptick on the £23.3bn the previous year, and generated £4.2bn in pre-tax profit, a margin on overall turnover of 12%, down from 14.4% in 2015. This small reduction reflects a year in which the market has cooled off in the highest value areas alongside strong demand elsewhere.

Despite the well-publicised travails of Bovis Homes – which nevertheless still reported a £154m 2016 profit – larger housebuilders are performing better than their medium-sized peers, with the top 10 builders reporting a whopping 16.5% average margin. Cenkos’ Cammack says: “They’re very strong, and massively different to the picture at the peak of the last cycle. Very few are carrying significant levels of debt, and, with the exception of Bovis, every listed builder has improved margins and returns.” Cammack says this leaves them in a good place to face three oncoming challenges: increasing labour shortages, possible increases in interest rates, and the potential reduction in government support.

Nothing exemplifies the potential risks in the current contracting market as much as £5.2bn-turnover Carillion, which earlier this month announced it was writing down £845m against underperforming contracts, of which £375m related to the UK, sparking a 70% collapse in its share price in the week of the announcement. Kevin Cammack, analyst at Cenkos, estimates its financial difficulties could see it having to halve the size of its construction business in the next two years.

While few firms, with the exception of Balfour Beatty, have the same scale of overseas business as Carillion, domestically many will have suffered similar pressures. Cammack says: “The Carillion news tells you that those firms that were doing fixed-price work when the market was recovering in 2014/15 have been increasingly exposed by cost inflation in the supply chain which has been catching them out.”

Cammack believes that increasingly ruthless claims management by clients has left contractors that have indicated they are exiting or reducing workload in a sector finding it very hard to get paid. “The client is often so commercial that when they can see the weakness of your hand, getting paid is very difficult,” he says.

It’s like a tough away game. You have to put in a gutsy performance and not mind if it’s a bit messy – but you’re pleased to come away with 1-0

Carillion’s experience also demonstrates the perils of chasing turnover by acquisition, Cammack says – with Carillion spending hundreds of millions of pounds over the last 15 years buying businesses such as Mowlem, Alfred McAlpine and Eaga, contributing to its now problematic debt mountain. Kier, for example, has concluded three years of rapid growth with a £15m loss. While not all currently fast-growing contractors have got there through acquisition, targeting turnover growth can lead to a loss of focus on maintaining margins. Osborne’s Steele says the combination of businesses on a targeted growth path with the current market “could be a very very dangerous moment. It becomes quite a risky time,” though he adds he doesn’t see any rivals “buying” work at very low prices yet.

Willmott Dixon’s Willmott, whose firm saw turnover fall back in 2016, agrees there are big risks to growing too quickly. “When we’ve grown fast in the past, it’s almost impossible to tell if the people you’re recruiting are good people for at least a year. And if they’re starting on new contracts, you haven’t got a cat in hell’s chance of knowing how that’s performing. Growth through acquisition is even more risky,” he says.

One business that has been on a rapid growth trajectory is Mace, which came close to hitting its £2bn 2020 turnover target three years early in 2016. While its construction chief operating officer Gareth Lewis utterly rejects the idea it has been chasing turnover, its 2016 year-end results did see its first fall in pre-tax profit in its 26-year history – falling from £36.2m in last year’s results to £10.7m this year – and he says the firm has since evolved its approach. “The question is now how do we get margin improvement. Now we’re able to be a little more selective, and we’re much more cautious on high-risk projects,” he says. This changing approach has seen the firm introduce monthly “gateway reviews” on major projects, and reduce its exposure to high-rise residential work.

But overall, says Lewis, the market is positive and the firm now has its largest ever pipeline of work, at £6bn – clearly for some, life is still good. The key for most contractors in this curate’s egg of a market is staying confident enough to avoid taking on projects which will be their problem jobs two years down the line. Osborne’s Steele says: “It’s a strange market. Using a football analogy it’s like a tough away game. You have to put in a gutsy performance and not mind if it’s a bit messy – but you’re pleased to come away with 1-0.” Right now, many contractors would be happy enough with that.