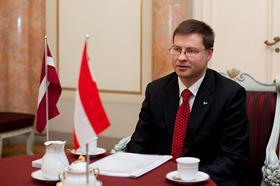 The Latvian government has fallen in the wake of the collapse of a supermarket in Riga.

Earlier this week, Latvian president Andris Berzins appealed for foreign construction consultants to help in investigating why the building collapsed. He said the disaster was man-made and should be investigated at “maximum speed”.

Berzins told state broadcaster LTV: “While not undermining the professionalism of our builders, I believe that we should call upon international expertise which is in no way connected with our construction business.”

Today, the BBC quoted Dombrovskis telling Baltic news agency Delfi: “The country needs a government which is capable of resolving the situation that has emerged”, with his spokesperson adding that the government took “political responsibility” for the tragedy.

At the time of the collapse, a garden and children’s playground were under construction on the supermarket’s roof. Latvian officials have speculated that the structure may not have been strong enough to support the additional weight.