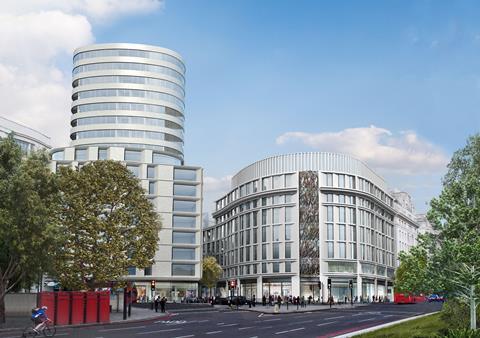 Rafael Viñoly has unveiled its design for a £520m mixed-use development in Marble Arch, London.

Contractor Sir Robert McAlpine is providing pre-construction advice on the project, which is due to start construction in 2015 and complete in 2018, subject to planning consent from Westminster council.

The project will involve demolishing a 24 storey tower on the site, at the corner of Oxford Street and Edgware Road, and replacing it with two towers of 17 and 7 storeys respectively.

The taller building will include apartments and shops at ground level while the smaller tower will contain commercial space and retail at ground level.

Almacantar also proposes to develop a further 76 homes, 47 of which will be affordable, on Edgware Road in a scheme that will also include some retail space.

The total value of the developments, including land acquisition costs, is understood to be £520m.

Kathrin Hersel, development director of Almacantar, said the plans would “create two timeless, beautiful buildings which will serve as a fitting gateway to Oxford Street”.

She added: “This landmark development will be a catalyst for the on-going transformation of the West End of Oxford Street.”