In redevelopment or refurbishment, retaining elements of existing buildings offers significant environmental and financial benefits. Mirko Farnetani and Juan José Lafuente of Sturgis Carbon Profiling give examples to quantify these benefits and provide recommendations when considering retention versus new-build for future projects

Refurbishment schemes are cheaper to complete and have a lower carbon footprint compared with new-build construction. The carbon and cost savings are derived from retaining elements of the existing buildings and avoiding the manufacture, transport and construction of these retained elements. The retained elements (and therefore potential savings) are often the more carbon- and cost-intensive parts of the building, such as the structural frame, cladding, and so on.

Cities are constantly evolving to the current and future needs of their inhabitants, and existing buildings can be earmarked for redevelopment for any number of reasons, for instance, functional, aesthetic and new ownership.

In most cases, new schemes are considered to be more efficient and attractive than refurbishment. However, this article shows that by following the circular economy principle of reuse, and opting for refurbishment, significant environmental and financial savings can be achieved, while still meeting the aesthetic and functional specifications of a new-build.

■ Large embodied carbon savings Embodied carbon is a measure of the carbon dioxide equivalents (CO2 and other greenhouse gases based on their relative global warming potential) – CO2e – emitted during the manufacture of building materials and components, their transport to site, the construction of the building, impacts from maintenance and replacements, and finally the end-of-life processes.

The erection of a new building (considering all the materials used and the construction process itself) is extremely energy intensive. In most cases, the fabric, substructure (foundations), superstructure and envelope account for the highest embodied carbon.

When a building is considered for redevelopment, preserving building systems such as the structure and facade will avoid significant manufacturing and construction processes, and therefore achieve significant embodied carbon savings.

■ Capital cost savings are inherent to retention of existing building fabric Preserving building elements means there is no need to procure and purchase significant quantities of new materials. Additionally, construction costs are reduced as the building program is shortened.

■ Retention also contributes to wider environmental benefits These can be used to achieve BREEAM credits, for instance BREEAM Wst 01 Construction waste management, or Mat 01 Life cycle impacts. They aim for maximum level of waste diverted from landfill and reduced embodied carbon for buildings and building components.

Similar credits can be achieved from other certification schemes (such as LEED or Green Star). In addition, building retention reduces the impact of construction traffic by reducing materials and machinery coming in and out of the building site.

A typical refurbishment project focuses on fabric remodelling, with the main works affecting the envelope and structure with the services and interior fit out treated as waste – different variations of this are shown in the case studies below.

The benefits of retention are also maximised when there is no change of use for the building in question.

■ Structure could be fully or partially retained, while still allowing for subsequent addition of new floor area. Typically, any new extensions are designed in steelwork in order to minimise additional loads. They should also be designed following the circular economy principles of flexibility, adaptability and demountability.

■ Facades are usually replaced to provide a more energy-efficient envelope, but also for design and aesthetic reasons. Glazed units are generally replaced in order to improve the reduced performance caused by degraded gaskets and seals. For buildings with solid external walls rather than fully-glazed, such as masonry and punched windows, the most efficient strategy is to retain the solid wall and replace the glazed windows.

Sturgis Carbon Profiling has assessed several projects where structural retention was one of the main building strategies.

Three comparable case studies (all London office buildings) were selected and are shown below.

They are introduced separately, showing what was retained from the pre-existing buildings and what was added to complete the redevelopment.

The Pentonville Road regeneration scheme (Islington, London) joined together and refurbished two 1980s office buildings by unifying the facades and structure. The scheme created 6,340m2 of office space, representing a 20% uplift in existing floor area. The front facade was fully rebuilt with a brick and punch windows design, whereas the rear facade was fully retained. 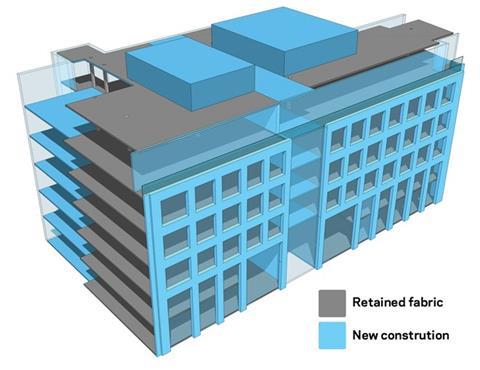 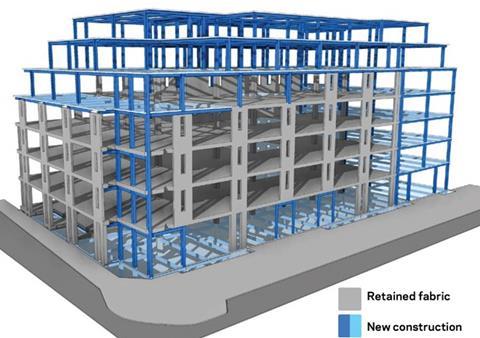 The redevelopment of St Lawrence House involved partial demolition, the refurbishment of existing structure and the construction of new structure to create a high-specification office building that includes retail and restaurant space. The scheme added 8,300m2 of floor area to the retained structure.

The existing building consisted of two units, built separately. The 1950s elements of St Lawrence House were demolished to basement level, together with the roof mansards. The 1980s concrete frame was retained but the facade was removed.

A new steel structure on new foundations replaced the demolished building, and a new core was positioned immediately next to the retained concrete frame.

A new steel structure was also built on top of the existing concrete structure, stepping back from street level to comply with planning requirements.

Verde SW1 is an office building next to the regeneration area of Victoria station in London. The project aimed to revitalise the appearance of the building, which was originally completed in 1998.

The refurbishment works focused mainly on volume remodelling including the addition of 9,000m2 floor area, alongside full recladding with new glazing units. The existing structural frame was almost fully retained. The addition of floor area and the redesign of an internal atrium enhanced the office space. Composite floor slabs and steel columns were added to the existing reinforced concrete flat slabs and columns.

Additionally, the glass waste from the removal of the existing fully-glazed facade was sent to a recycling facility rather than landfill, saving approximately 100 tonnes of CO2e.

The following table compares the environmental and financial benefits of the three retention schemes described above.

First, the embodied carbon expenditure avoided by retaining building elements rather than building from new is quantified. For context, this embodied carbon saving is shown in terms of the equivalent number of years of operational carbon (heating, cooling, lighting, and so on).

Secondly, the indicative financial savings (from retention rather than new-build) are shown. To ensure like-for-like comparisons, the embodied carbon and costs calculations are based on the same typical construction specification and unitary values.

[1] Carbon benefits (at practical completion) are calculated based against the assumption that all retained structures to be demolished and rebuilt as new structures, for instance composite floor slab (steel beams and metal decking with in-situ concrete floor slabs) + steel columns + substructures.
[2] Based on cost references: MPA - The Concrete Centre, Office Cost Study: comparing the effects of structural solutions on cost, 2014, Ref. TCC/03/57

The case studies demonstrate the huge potential benefits of retaining building elements. They show a variety of ways in which much of an existing building’s fabric could be retained while still redeveloping the building to current specifications and aesthetic requirements. Demolition of buildings should therefore be the last design option, especially when considering the embodied carbon and the financial costs of building anew.

However, we also need to project these benefits into the future, into the buildings and structures that we are currently designing. Are our current designs flexible enough to accommodate future changes? Are we limiting the future use of our buildings, reducing their lifespan with decisions targeting short-term benefits? Is this compromising the future value of our buildings? Circular economy principles, low-carbon thinking and design for climate change adaptation all aim to ensure our current designs are adaptable to future needs.

Considering retention as part of whole-life carbon thinking can encourage longer system (and sub-system) lifespans, more durable components and improved adaptability to meet the future requirements of buildings and cities. With intelligent design, building elements can be made suitable for multiple building lifecycles rather than only one.

The case studies described in this article all committed to a low-carbon approach by undertaking a whole-life carbon assessment. This approach capitalised the benefits of retaining existing components, and by designing to be flexible and adaptable, the long-term viability of the buildings was also improved.

Future social, economic and environmental changes will continue to change our buildings and cities. We are now designing buildings that will, in the not too distant future, be considered for retention or demolition.

Only by taking the right long-term, low-carbon choices today, will we ensure that they will continue to have value long into the future.

The authors want to thank Leo Cheung, Dr Qian Li and Simon Sturgis, all of Sturgis Carbon Profiling, for their invaluable contribution and constructive criticism during the development of this article.