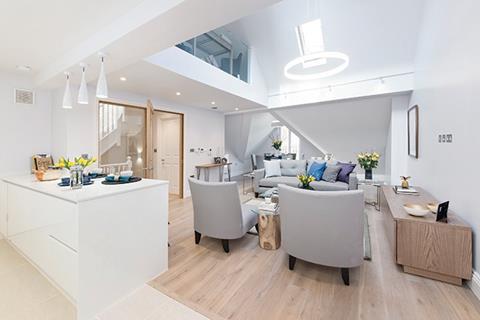 EnerPHit is the highest energy standard for refurbishments in the UK, based on the German Passivhaus quality certification criteria. Broadly, it means the property is virtually airtight and has high insulation levels, resulting in a low heating demand, hence the term “passive”. This is achieved with limited intervention to the building and without excessive costs.

Over the last year, we have delivered a number of retrofits in London, ranging from terraces built in the 1720s, to a large-scale social housing project from the 1960s. Most of these were designed to comply with EnerPHit standards.

In this piece, we compare three scenarios from the whole-life carbon perspective: a typical un-refurbished terrace; a Part L compliant retrofit; and a deep retrofit to EnerPHit standard. We also look at the economic and carbon benefits of different types of insulation.

Based on BS EN 15978, carbon emissions from buildings are attributed to four main categories:
(i) Product Manufacture (ii) Construction
(iii) In Use and (iv) End of Life.
More detailed subcategories further classify specific sources of emissions.

The reason why we recommend clients undertake deep retrofit projects to EnerPhit standard are: 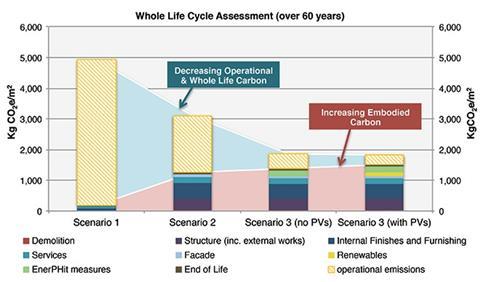 We made the following assumptions when completing the whole-life carbon assessment:

The graph above shows considerable differences between the whole-life carbon footprints of the three scenarios. The operational emissions decrease steeply with each successive measure, however, the increase in embodied carbon is relatively gradual. Looking closely:

A deep retrofit to EnerPHit standards with renewables can reduce the overall operational energy demand to a minimum, possibly paving a way to zero-carbon future.

Emissions from residential buildings contribute 12% towards greenhouse emissions. The government Carbon Plan committed to reducing carbon emissions by 34% by 2020 and 80% by 2050 below the 1990 baseline. It states that what will make the most impact, most quickly, is retrofit work to existing housing, prioritising the most cost effective measures such as cavity wall and loft insulation.

Free insulation initiatives by utility providers have been relatively successful. These are funded by a government-backed scheme called the Carbon Emissions Reduction Targets (CERT), where consumers pay for the scheme through a levy on energy bills. 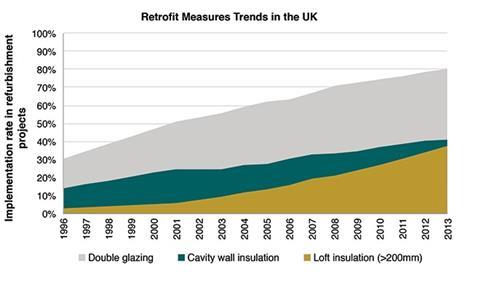 Figure 2, from the English Housing Survey 2013, demonstrates that since 1996 the number of dwellings with insulation increased by 27% and 34% with cavity wall and loft insulation respectively compared to the 1996 figures. In the last few years the figures have started to plateau as the number of uninsulated households with cavity walls and lofts are decreasing. As this trend progresses, to achieve further carbon reductions, more homes will need to undergo deeper retrofits.

The answer to optimum insulation depends not only on energy efficiency but also type of property (age and historic value), location and economy of scale. For example, using 40mm aerogel that may cost £150/m2 to supply only, is still a cost effective solution in central London, where the value of floor area is above £5,000/m2. The study below looks at carbon economics of different insulation types. 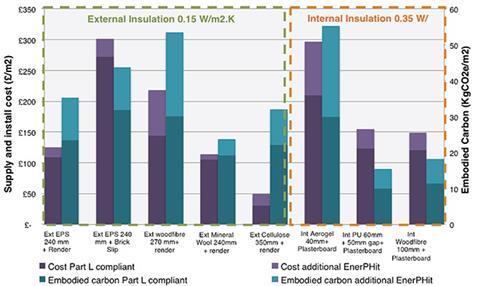 Based on the English Housing Survey (2013) 31% of dwellings do not have cavity walls and 22% have no loft. These will require more intrusive retrofit measures, such as internal/external wall insulation.

To compare eight insulation systems from the point of view of investment cost and embodied carbon the following assumptions were made:

The graph above compares deep retrofit insulation systems that achieve EnerPHit standard over and above the Part L from the point of view of cost and embodied carbon. The study shows the following trends:

In summary, based on the findings presented above: