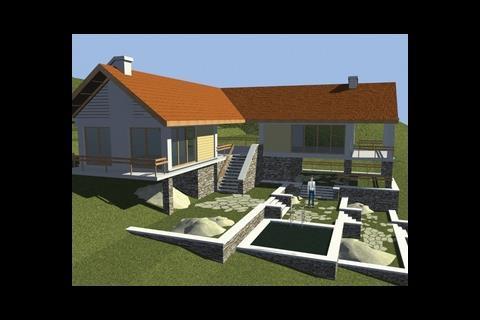 Archi-Me allows members of a design team – and clients – to create avatars of themselves and then “visit” a project to see how well it works. 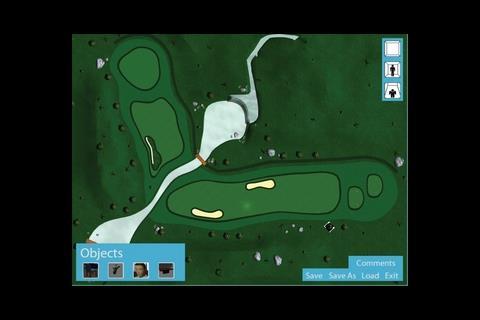 The program allows users to view a project from the perspective of a child, or a disabled user (above left), or a bird in the case of the golf course above. 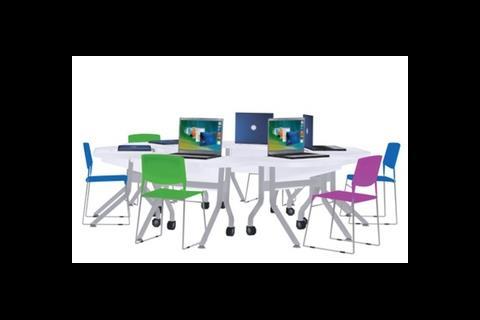 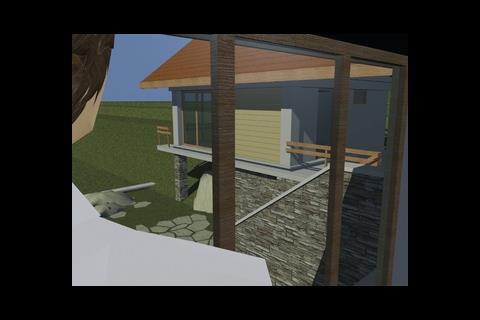 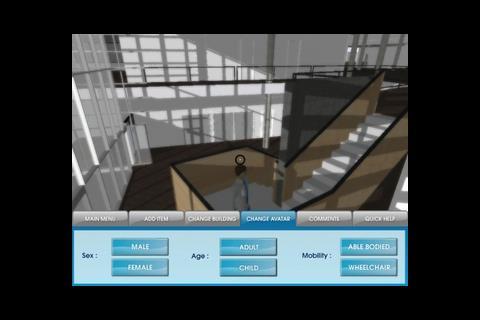 This month sees the release of Avatar, the first film in more than a decade from the awardwinning director James Cameron.

It features the idea that an individual’s consciousness can be downloaded into a physical representation of them. Cameron envisions that this representation, or avatar, will be a genetically created life form, but for now avatars are digital creations confined to computer games and Second Life, the online virtual world.

Built environment professionals, not being ones to lag behind trends in technology, can now enjoy watching their own avatars walking around their own projects thanks to new software, called Archi-Me, which transforms a CAD model into a 3D navigable environment. Members of the team are able instantly to upload their models into the software and use their human avatars to explore and interact with the surroundings.

The programme was created by Moofu, a multimedia production company which specialises in emerging technology and markets. It believes that Archi-Me will change the way designers and clients visualise and test building projects.

The software owes its existence to gaming technology and to a happy accident, says Nick Palfrey, founder and managing director of Moofu. “Last year we built a game that aimed to show children how to take charge of their own learning through things such as video and podcasts. We won an award and at the prize-giving I was introduced to Mint Orr from the architect Woods Bagot.

“She liked what we were doing and the idea emerged that we could use their existing and potential buildings in our games. We uploaded some CAD models and were immediately able to walk around the space. When we asked if this was something that was in the sector, the architects said no.”

The idea was refined and Kenn Fisher, director of learning at Woods Bagot, put together a consortium of five funding bodies and commissioned Plymouth-based Moofu to build an educational planning tool. Palfrey says that the response was immediate, with property developers, architects and engineers the main groups particularly eager to use the software.

“A firm can spend three months delivering a 3D model of a space to showcase it to the engineer, architect or planner. With this system, they wouldn’t have to spend another three months making changes.

“There are systems that can do something like this but as far as I’m aware they are based around the idea that you have to design the building and environment from scratch.”

The main benefits of the tool are the savings in money and man hours, Palfrey says. “When we looked at how people tend to visualise 3D, we found that they spend a lot of time making it perfect. When you have a large building that costs an exorbitant amount of money, I would argue that you need a simple visual at the early stages that enables you to walk around and enhance.”

People tend to spend a lot of time making 3D look perfect. I would argue that you need a simple visual at the early stages that allows you to walk around and enhance

The program, which can be accessed as software or via the internet, allows users to interact with the surroundings. Furniture can be rearranged, doors opened, columns and staircases moved. Spaces can also be observed in the first person.

Palfrey says this interactivity is useful to client and designer alike. “When we were brainstorming ways to use the software better, we considered what would be useful to clients and end users. From a property occupier’s point of view, it’s not a bad idea to be able to change the colour of the wallpaper and carpets. They can even access the space online without having to meet with the planner. From a planner’s point of view, columns and staircases can be moved around to see how this affects the aesthetics. For large projects such as skyscrapers, that’s quite something.”

Being able to access the software online has proved a useful aspect of the tool, particularly for multidisciplinary firms that have staff spread across the country. Up to 10 people, linked with headsets, can be logged in together. However, Palfrey is also enthusiastic about what Archi-Me can do in terms of bringing team members together in person.

“Archi-Me essentially is a way for engineers, architects, designers, planners and property developers to showcase, design and market newbuilds or proposed schemes to potential stakeholders, but it’s also an interesting tool for just sitting around a table and evaluating the space.” A client might take the opportunity to say he or she disliked the location of a column, and the engineer and architect could see whether and how it could be moved.

Archi-Me may not be as photo-real as other 3D imagery tools in the sector but the compensation, in Palfrey’s opinion, is the level of interactivity the software can provide at the key early stage of a project.

“It may seem silly,” he says, “but a client can pay a lot of money for a flythrough only to wish that they had made it five degrees more to the left. With a tool like this you have a high level of control. You do have a trade-off with the quality of the image, but that is minor in comparison with the ability to look down the stairs as your avatar.”

The avatar is not a unique concept, but Palfrey believes that in this context, with instant navigable spaces at users’ disposal, Archi-Me offer a more appealing human touch. “Having a human avatar adds something more to the experience, rather than just being walked or swept through the space. People like the fact that they can walk down the street and check out the views from different angles. You can get a sense of the building’s context that way, which is handy for public land projects.”

While Archi-Me will never be completely “architecturally sound”, the company is looking into extra functionality, such as daylight and acoustic modelling. Palfrey says the tool will be led by what the users demand.

“Clients can just send in their 3D models, we upload them and they’re good to go, but ideally we like to open up the discussion to what they need and want and build in that functionality accordingly. Safety, acoustics and lighting are next but they will require a lot of research and we’ll have to find a way to authenticate the output.

“So far the feedback has been very positive. With all the people involved in any given project, having a digital tool that allows them to sit down and talk is a powerful thing.”

Visualisation tools have been the preserve of those with a keen eye on marketing – using slick flythroughs to add some weight to the pitch. Archi-Me moves the visualisation toolset into a much wider domain, but does that havesignificant benefits?

For a professional who manages many elements within the construction process, the ability to test a design as an interactive simulation before any significant work begins is a welcome advance. The traditional flythrough has too many limitations to be of real use in the early stages, so the facility to engage with a 3D environment is clearly helpful.

It’s not perfect as a means of testing and reformulating plans because it’s not absolutely realistic, but it does provide an attractive, playful environment. That’s important as a means of making sure that colleagues and clients view the process and development in a positive way. The web browser function also helps by providing access to anyone in the team, and the text facility works well. The planned voice application will be a good addition.

The interface is simple enough to be used by anyone who has played a computer game and the avatars move in a recognisably realistic way. There is scope to change the interface and the avatars within the service agreement so you can add/alter movement and the look and feel of the characters.

The avatars perform in realistic ways. You can’t walk through stairs or walls, but you can change the lighting and move furniture and fittings around, which helpsin the later stages of the design process. It would be useful to have more control over lighting and textures, which Moofu is planning.

An important addition would be the ability to alter the structure of the internal environment. At the moment, you cannot move load-bearing walls, for instance. Feedback into the main CAD design would be even better.

As I work a lot in the education sector, I liked the facility to use wheelchairs and different-size people in the simulations. It is possible to pick up quite serious design flaws in terms of access and so on.

Of course, it is necessary to balance freedom to test and revise plans with the need to control the project. Architects in particular may feel this opens up Pandora’sbox and diminishes their creative control. As in all project management, there will be someone who makes the final decisions. Agile and clever managers would benefit from the Archi-Me process.