Experian Economics shows that construction activity increased 2% on the previous quarter, taking it 6% above the level taken for the same period in 2013

In the third quarter of 2014, construction output totalled £30.46bn in 2011 prices. It had increased 2% on the previous three-month’s total and was 6% above its level for the same period of 2013. On a four-quarter moving total basis it had increased for the fifth consecutive quarter in the three months to October of last year.

The final estimate of GDP for the third quarter of 2014 showed that the economy grew by 0.7% quarter-on-quarter in real terms, unrevised from the second estimate. Real GDP increased by 2.6% from the same quarter a year earlier, this figure was revised downwards by 0.4 percentage points from the previously published estimate due to lower government and business investment than first thought, and higher imports.

The public and private housing sectors made strong gains in the third quarter of 2014, on both quarterly and annual measures. At the £1.47bn output, the former had increased by 4% three-months on three-months and it was also 31% higher than its level for the same quarter a year earlier. Given the weakness in orders over the same period, there was a risk of a fall in activity, but this would have been offset to an extent by the 61% rise in orders in 2012. Going forward, the Affordable Housing Programme between 2015 and 2018 includes about £3.3bn of new investment, which is similar to the levels seen over the last four years. Therefore growth in the sector will be predicated on the ability of social housing providers to access even more private finance. Output in the private housing sector stood at £5.42bn; it was up 6% and 23% on the same measures. Government schemes such as Help to Buy are still having a positive effect on activity. Further schemes, such as the recently announced reduction in stamp duty, should also provide buoyancy, however, their effectiveness of these initiatives could be offset by future interest rate rises.

The industrial sector was the only other to see growth on an annual basis. Totalling £880m it was up 17% on the same three months of 2013. Manufacturing output in 2014 is estimated to have been strong at over 3%, which should drive demand for factories and warehouses, although growth may slow down this year in the face of weakening overseas demand, particularly from the eurozone. In the short-term we expect growth in warehouses to be stronger than the factories sub-sector, driven by consistently high demand for new distribution facilities.

All of the remaining new work sectors experienced a fall in output. Commercial activity fell on both a quarterly and annual basis to £5.5bn. Despite this, we expect the sector to perform well in the short-term led by strong orders figures for both the offices and leisure sub-sectors.

The infrastructure and public non-residential sectors also experienced falls on an annual basis. The former fell 5% to £3.13bn, although activity in the sector remains at a particularly high level. We expect further solid performance in the short-term as work on AMP6 gathers momentum and the construction of Thames Tideway Tunnel commences. The public non-residential sector saw its activity fall by 7% year-on-year as it continues to exhibit weakness in terms of new orders and its pipeline of new work, although the outlook remains bright for the universities sub-sector, which has a raft of new developments currently on-site and due to commence in the short-term.

New work orders totalled £12.58bn. They had increased on both a quarterly and annual basis at respective rates of 5% and 3%. On a four-quarter moving total basis orders have been progressing along a positive trajectory since early 2013. Of the new work sectors only the private housing and public non-residential ones posted any growth on an annual basis. Public housing and infrastructure orders saw the sharpest declines on the same measures. 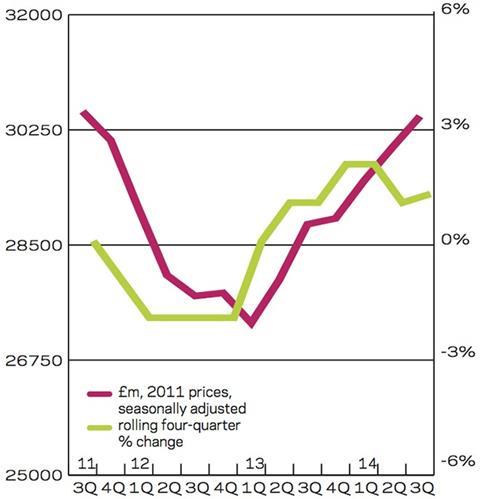 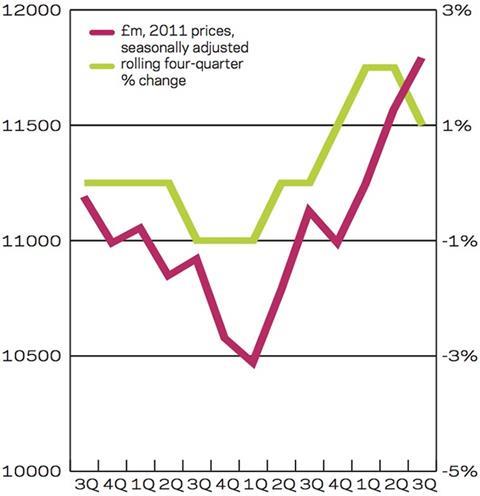 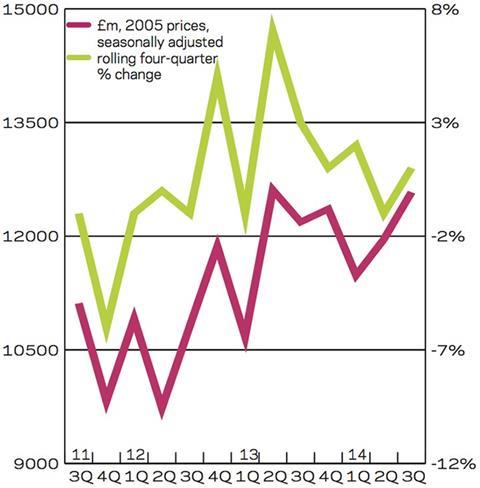 We have forecast growth across all of the new work sectors on an annual average basis with the exception of public housing which, is set to remain flat. Infrastructure activity is forecast the largest average expansion, as work on a number of major projects gets underway. 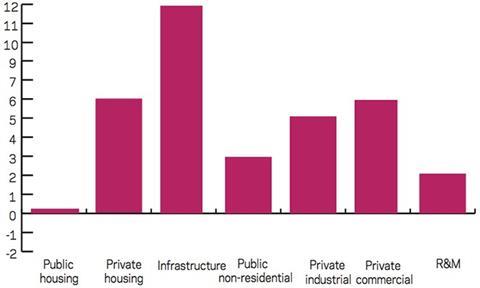 Output in the third quarter of this year was higher than it was in the same period of last year in eight of 11 regions and devolved nations.

Repair and maintenance (R&M) output grew in nine out of 11 regions and devolved nations, over the same measures. The West Midlands, Wales and Yorkshire & Humber made the largest gains in percentage terms.

The East Midlands, East of England, Wales and Scotland all saw new work orders fall in the third quarter of 2014 when compared with the same three months a year earlier.