Output is slowing as the uncertainty around Brexit continues, especially in the commercial sector, but private and public housing are holding up well as demand remains strong. Experian Economics reports

The first Office for National Statistics (ONS) estimate of GDP for  Q4 of 2018 showed economic growth slowed to 0.2%, quarter-on-quarter. Year-on-year, output increases eased to 1.3%, after a brief pickup over the summer. In 2018 as a whole UK GDP rose by 1.4% year-on-year, the shallowest increase since 2009. The repercussions of the recession and the implications of the Brexit vote mean the pace of growth is set to be well below the long-term trend in 2018-22, averaging 1.5%.

In Q4 construction output rose 1% to £41.26bn (in 2016 prices), against the same period in 2017. Public housing contributed to this with a 2% rise to £1.64bn; it is expected to grow by an annual average of 7% over the next three years. To meet its ambitious housebuilding targets, the government has announced increased funding for social and affordable housing and an intention to remove the local authority borrowing cap; this should help the sector to achieve double-digit expansion by 2021. The sector is one of the least exposed to Brexit.

The private housing sector contributed even more to overall output in the final quarter of 2018, rising 3% to £9.35bn, making it the largest new work sector for the 15th consecutive quarter. It is expected to continue growing over the forecast period, albeit at a slower average rate of 3% a year. The housing market remains relatively quiet in comparison with previous growth periods, with estimated property transactions in 2018 standing at their lowest level since 2013. With private housing output already at historic highs and given the uncertainty surrounding Brexit and the political turmoil it has induced, the room for further robust growth is constrained. However, the ongoing long-term mismatch between supply and demand is likely to keep activity in the sector moving upwards, albeit more moderately than recently.

Of the new work sectors, infrastructure output made the largest contribution to overall expansion in Q4 of 2018, up 9% on the same period in 2017, to £5.32bn. The sector is expected to experience the strongest annual average growth of all sectors in the short term, at 8%. Much of the growth forecast for this sector is from already committed megaprojects, such as Hinkley Point and HS2. However, some downgrade is likely due to the cancellation of the Wylfa nuclear power station.

Output in public non-residential exhibited its seventh consecutive quarter of annualised decline in Q4 of 2018, albeit a more moderate 2% fall to £2.49bn. Sector output for the year is estimated to have dropped to its lowest level since 2007 in real terms, but we expect a modest rise as more education work comes through and work restarts on delayed hospital projects. Output is expected to average 1% a year over the forecast period, flattening out by 2021.

Output in the industrial sector declined for a second consecutive quarter, falling 3% compared with Q4 of 2017, to a total of £1.18bn. Output is expected to remain flat through 2019 then gradually recover, giving an annual average expansion of around 1%. While manufacturing is expected to be hit by the trading uncertainties of Brexit, warehousing could benefit from the need for more storage – the overall result of these two factors being modest growth.

Despite remaining the second-largest new work sector by a clear margin, the commercial sector experienced the largest annualised contraction. This marked its fourth consecutive period of decline, with an annualised contraction of 4% to £7.23bn in Q4. Commercial, in particular offices, remains the most exposed to Brexit uncertainties.

The 2017 slump in new orders for offices is yet to fully feed through to output. With sizeable declines in orders in retail and leisure in 2018, the prognosis for the commercial sector as a whole over the next two years remains poor, with output only stabilising in 2021. 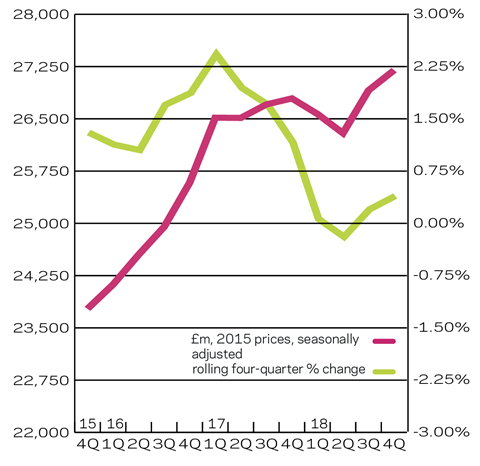 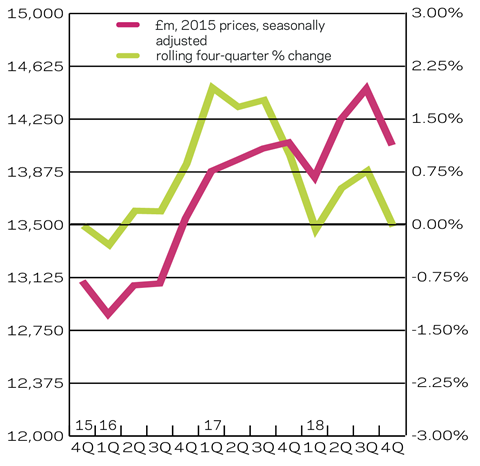 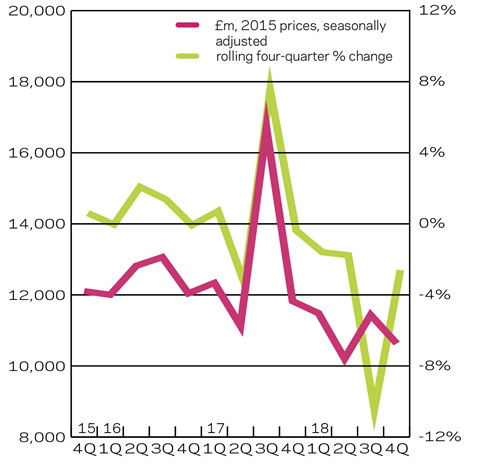 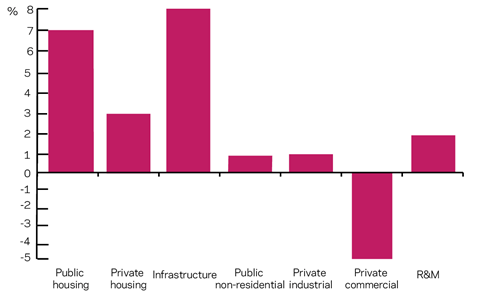 In the three months to December 2018, new work output in current prices increased in eight out of 11 regions and devolved nations on an annual basis.

Output for the R&M sector increased in six out of 11 regions and devolved nations on the same measure.

New work orders increased in just three out of 11 regions on an annualised basis in the final quarter of 2018. The North-west and Yorkshire and Humber both experienced sizeable decreases in orders. In the latter, this was largely attributable to the infrastructure sector, where it reflected the placing of orders for the £2.25bn Transpennine Upgrade one year prior. Scotland experienced the single biggest rise in orders, mainly for infrastructure projects, with the fourth quarter of 2018 exhibiting the largest quarterly order figure on record for the sector. At present it is unclear what specific projects this is related to.