Office construction will continue to decline this year and next in a volatile environment, and downside risks to retail are likely to grow as consumer finances remain precarious. Experian Economics reports

The latest figures from the Office for National Statistics (ONS) show UK GDP declined by an estimated 0.2% (quarter-on-quarter) in Q2 of 2019, having grown by 0.5% in Q1. Compared with the same quarter of 2018 this represents a 1.2% increase, down from 1.8% in the previous quarter. Overall, we expect 2019 to be the weakest year since the 2008 recession in GDP growth terms.

Construction output in Q2 ticked up by 1% to £41.05bn (in 2016 prices), against the same period in 2018. Public housing contributed to this significantly, with a 29% increase in output to £1.91bn; the largest percentage change of all new work sectors. Sector output is expected to grow by an annual average of 4% in the next three years.

We were expecting output to gradually pick up each year of the current forecast period. However, with the latest output data suggesting that government initiatives to boost housing supply are already having an effect, we could end up seeing stronger growth than anticipated this year, with steadier growth thereafter tempered by the recent slowdown in sector orders.

Private housing construction made a comparatively modest contribution to overall output growth in the second quarter of 2019, rising 3% in annual terms to £9.04bn, but remained the largest new work sector for the 18th consecutive quarter. Prospects for the sector remain little changed since our last report.

Favourable population dynamics and improving consumer finances should continue to drive housing demand throughout the current forecast period. Given the challenging backdrop of macroeconomic weakness and political uncertainty, however, we expect sector output growth to remain subdued, with annual expansion averaging 3%.

The infrastructure sector made the largest contribution to overall expansion out of the new work sectors for a third consecutive period, up 12% annually in Q2 of 2019, to £5.62bn. The sector is expected to experience the strongest annual average growth of all sectors in the short term, at 8%. The strongest drivers of this remain electricity, rail and road, as Hinkley Point C nuclear power station moves to main construction activities and HS2 output increases, supported by increased work from the Highways Agency road programme. As the likelihood of delays to HS2 work grows, however, we could see weaker sector growth after this year.

Output in the public non-residential sector faltered in Q2 of 2019, contracting by 5% in annual terms, to £2.24bn.

With the latest orders data showing sustained quarterly growth in four-quarter moving totals terms, however, we expect output to recover throughout the current forecast period. Output is expected to average 3% a year to 2021, with stronger growth in the latter two years, as work gets under way on several university expansion projects and delayed hospital projects.

Following two quarters of flat growth in annual terms, output in the industrial sector experienced a 6% decline in Q2 of 2019 compared with the same period of 2018, to a total of £1.21bn. Output growth is expected to remain constrained throughout 2019, gradually picking up pace thereafter to average annual expansion of 3%. As the factories sub-sector continues to struggle, it is hoped that the requirement for new distribution and logistics facilities will be enough to drive overall expansion, particularly if Brexit means that just-in-time delivery becomes harder to sustain and firms are forced to hold more stock.

Despite remaining the second largest new work sector, the commercial sector experienced the largest annualised contraction for a sixth consecutive year, with a 5% fall to £6.98bn in Q2 2019. As the most exposed sector to Brexit uncertainties, we don’t expect commercial construction to stabilise until 2021. Office construction will continue to decline this year and next in an uncertain environment and downside risks to retail are likely to grow, as consumer finances – while positive now – are precarious. 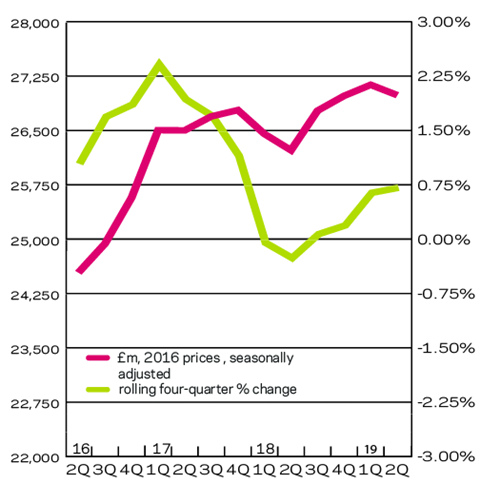 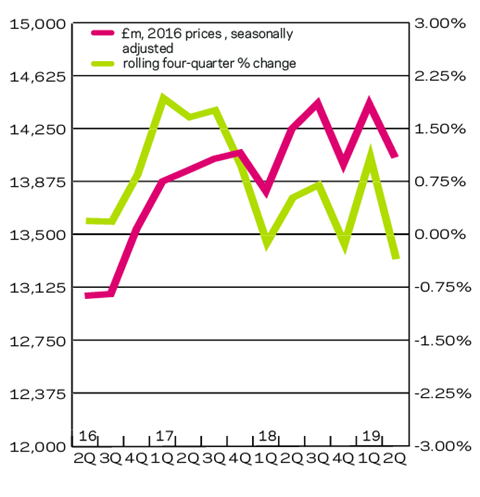 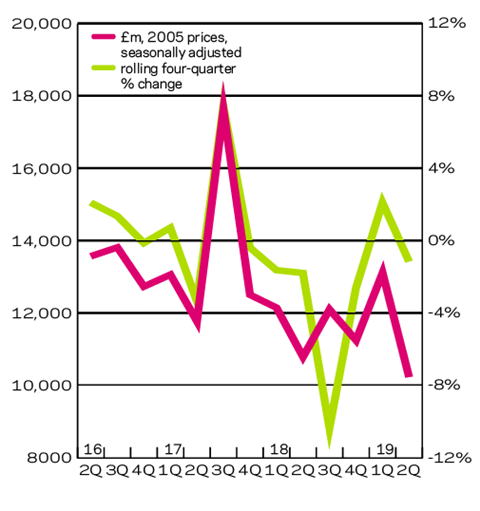 The public housing, private housing, infrastructure, public non-residential and industrial sectors are all expected to post annual average growth over the latest forecast period, with infrastructure output growth remaining the strongest. Repair and maintenance (R&M) output is also expected to remain buoyant throughout. The private commercial sector is the only sector that is expected to post average yearly declines in the same period. 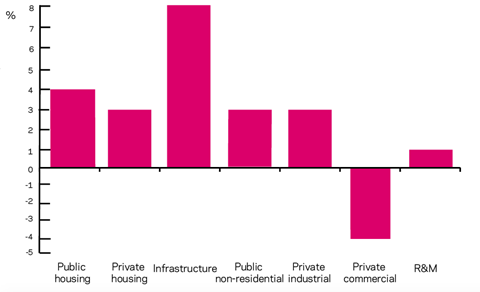 In the three months to June 2019, new work output in current prices increased in eight out of 11 regions and devolved nations on an annual basis.

Output for the R&M sector increased in seven out of 11 regions and devolved nations on the same measure.

New work orders increased in just three out of 11 regions and devolved nations on an annualised basis in the second quarter of 2019. The single largest increase by some margin was seen in the North-west, where the rise was almost entirely attributable to the infrastructure sector. According to Barbour ABI, this was driven by the placing of orders for the SRP Process Facility at Sellafield nuclear site, which is valued at £1.5bn.