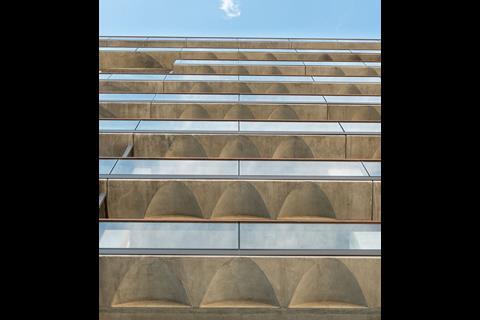 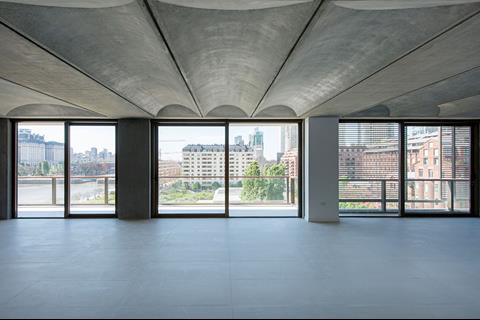 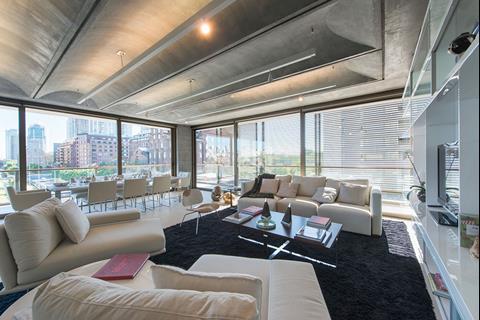 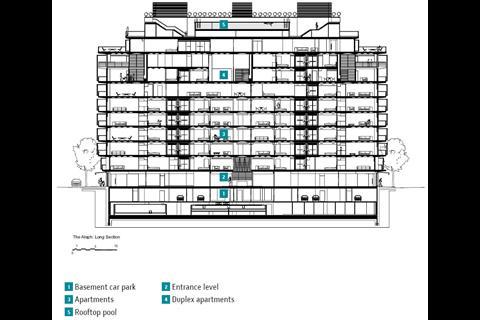 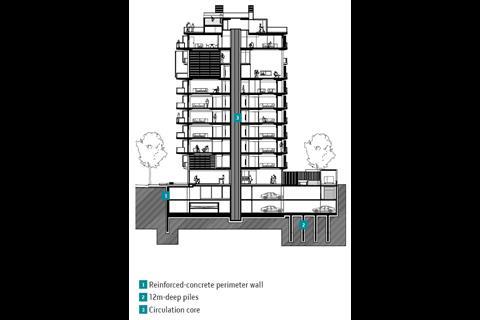 Foster + Partners brings something new to Buenos Aires, with an apartment block that uses fair-faced finishes to redefine the Argentinian capital’s idea of luxury living

Foster + Partners’ first foray into South America is the Aleph - a nine-storey prestige apartment block near the banks of the River Plate in Buenos Aires. It is part of a redevelopment of the old harbourside neighbourhood of Puerto Madero and, like similar projects the world over, its challenge has been to combine a sense of place with modernity - and the kind of must-have desirability that ensures commercial success.

Fortunately, the Foster magic seems as potent here as on any other continent. The Aleph has already claimed an RIBA International Award, and even though prices started at around $1m (£624,000), every one of its 50 apartments is now sold. So in a city with literally thousands of apartment blocks, how has Foster made this one special?

“Firstly it is a very popular place to live, in a great location with views out over the water,” says Juan Frigerio, project architect. “But even so, the prices are high for Buenos Aires, so you are looking to attract people who want something a little bit unusual, and actually the Aleph is very different from anything around.”

Certainly the basic construction of the Aleph is not what sets it apart: virtually every post-colonial building of any size in the city is similarly constructed. “It is true that in-situ concrete is the standard construction material in Buenos Aires,” concedes Frigerio. “But what’s different about the Aleph is that we have exposed fair-faced concrete on the exterior and the interior. This is very unusual here, and an achievement we take pride in.
“The client [developer Faena Group] took some persuading, but we lobbied hard and were able to convince them that the purer architectural expression of the building structure was to leave the concrete visible. It is now one of the few buildings in the city that manages to express the beauty of concrete as struck.” 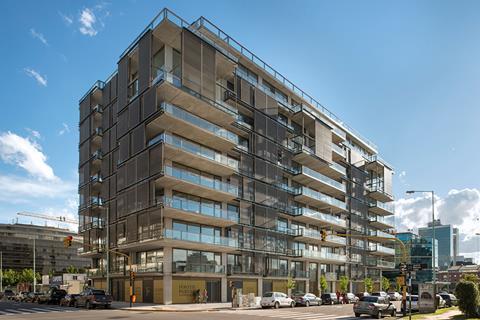 From a distance though, it is not the concrete that immediately defines the building; rather it is the arrangement of generous balcony space and a system of high-quality bronzed aluminium louvred sun screens. On some of the larger, double-height apartments, these are electrically controlled, but for the most part they are simply pulled into position by hand. Reminiscent of Venetian or rattan blinds, casting slatted shadows into the interior, these reference a more traditional Argentinian lifestyle.

Such a reference is a trademark Foster approach, and one that also explains the apartments’ concrete ceilings. Left as struck, these have a distinctive vaulted shape. Frigerio says they are partly inspired by a type of traditional Argentinian home: “We call them ‘casa chorizo’ because of their sausage-shaped vaulted ceilings made from brick.” At the Aleph, the arched brickwork shape has been replaced by similarly vaulted ceilings in concrete, made by inserting curved timber formwork into the shuttering for the floor slabs.

As well as providing an unusual take on a traditional aesthetic, copying the shape of the “sausage houses” delivers a number of technical benefits: “The vaults rise 20cm into the 30cm depth of the floor slab, so this gives an extra space and height to the living rooms and also reduces the amount of material used. And that reduces the overall weight of the floor slabs that the frame has to support.”

The bare concrete ceilings did mean that special consideration had to be given to the location of services - recesses and rebates were cast in the floor slabs to accommodate the drainage and pipework. With the electrics too, cabling and boxes were carefully coordinated at an early stage and then cast in. “The lighting, for example, comes directly from slightly recessed boxes cast into the ceiling, though this is common in Argentina,” says Frigerio.

Unlike many projects that opt for an as-struck finish, the Aleph is constructed from ordinary structural concrete with the same colour cement and aggregate content throughout, a decision driven partly by economics. Great pains were taken, however, to achieve an attractive finish, including the use of three types of formwork (see “The formwork factor”, overleaf). “Fair-face concrete is unusual here, so I think everybody had to up their game a little bit,” says Frigerio. “But there is a well developed in-situ concrete industry, plenty of skill, and good quality, reliable materials. To be honest, it was easier to persuade the contractor to do what we wanted than it was to persuade the client that exposed concrete was not only acceptable, but actually hip and cool!”

As part of the persuasion process, the ceiling in one apartment was painted as a trial. “We tried five different colours, and in the end the client agreed it was best to leave it unpainted. That apartment was sanded down and is now like the others.”

Kitchens and living space all have the Foster touch of elegant simplicity - a minimal palette of limestone flooring and plain plastered walls contrasts with the texture of exposed concrete ceilings and columns. The apartments range from 90-300m2, but all have wide, glazed doors and walls offering panoramic views out to sea, or over the spectacular urban vista offered by one of the world’s largest cities.

“It’s not that the materials we have used are ridiculously expensive,” says Frigerio, “but the ivory floors, white walls and exposed concrete combine to give a very bright luminous feel - very comfortable, elegant and refined.”

Certainly head height is a luxurious 2.9m, rising to 3.1m in the vaulted concrete ceilings. The living room walls are of sliding glass, allowing the spacious concrete balconies to easily become part of the living area. As the building is located in the southern hemisphere, sunscreens are on all but the south face, providing privacy as well as shelter from the strong sun of the summer months. Apartments also receive additional shading from the width of the balconies above.

“The idea is for the doors to the balconies to remain open for much of the time,” says Frigerio. “Buenos Aires has a temperate climate, so heating is only needed for a few weeks every year. Cooling is more of an issue, but the thermal mass of the concrete helps to absorb the heat of hotter days, and residents can just leave the doors open and allow the sea breezes to keep the apartments cool in summer.”

Frigerio says the combination of concrete frame, sunscreens and balcony living allows active air-conditioning to be kept to a minimum and helps to reduce the energy consumption of the block.

With its rooftop pool and designer good looks, it is small wonder that the fashionable crowd have taken to the Aleph - and it seems likely that its popularity could change the perspective of local designers. Concrete might be the city’s default structural material, but Foster has shown how it can also be used as a defining and distinctive design feature.

Structure: From piling to rooftop pool

The Aleph’s position overlooking the harbour at the mouth of the River Plate meant that the groundworks required special consideration. “This harbour was created by British engineers in the 1880s,” says Foster + Partners project architect Juan Frigerio. “But the ground is wet and poor quality so the buildings here effectively float like rafts.”

To define the 18,500m2 site, contiguous piling was sunk around the perimeter, which allowed the basement to be excavated without the soft ground collapsing inwards. Pumps removed water while the 12m-deep concrete piles were sunk. A reinforced-concrete wall was then constructed immediately inside the contiguous piling, which became the outline of the basement car park. “Water pressure from below was potentially a problem, so the concrete ground slab is thicker than normal,” says Frigerio. “There are also sumps and pumps which collect and remove water on a permanent basis.”

At one stage, the Aleph’s luxury swimming pool was to be located in the basement, but it was relocated to the roof, partly because of the pressing need for parking. “It is also much nicer up there, with a heated infinity pool and great views,” says Frigerio. “The pool is 1.1m deep and constructed of concrete. In fact there is a double slab at the top with a 1.5m gap below the pool for plant and maintenance access. All that water and concrete is quite heavy so obviously we had to ensure the frame is robust enough to take the weight.” 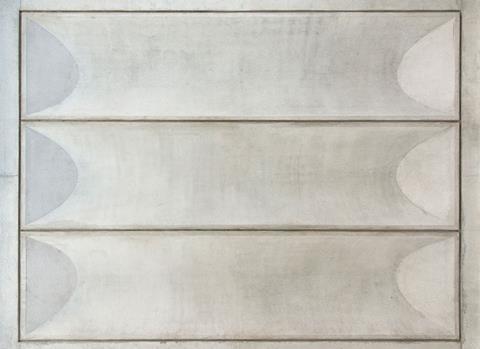 Three types of formwork were used during the construction of the Aleph: timber, glass-reinforced plastic (GRP) and steel.

“We used steel for the columns, mainly because you can get a very good finish,” says Foster + Partners project architect Juan Frigerio. Although steel moulds are relatively expensive, they can be re-used many times, which meant that only a small number were required. “Also, since the steel forms are placed vertically to create columns, their weight is not as much of an issue as it would be using steel for spans.”

The beamless floor slabs were poured into timber formwork supported by scaffolding and props. To create the curving vaulted ceilings, laminated ply was used to make forms roughly like cylinders split lengthways. “We used 6mm laminate, which allows the timber to be bent into the curved shape and then nailed down, with the nails covered in resin to avoid nail marks.”

These forms were placed on top of the timber deck before pouring and, after a 21-day curing process, the formwork and props were taken away to reveal the vaulted ceilings. “The shadow lines between vaults are very neat, which we achieved by using removable metal inserts along the straight edges of the curved forms.”

The most complex moulds, however, were the GRP forms needed to create the elliptical shapes “hollowed out” of the underside of the Aleph’s many balconies. These shapes also create striking patterns when viewed from the immediate exterior of the building.

“We used GRP because the geometry of the balconies was more exact and demanding,” says Frigerio. “The shapes curve in two dimensions, rather than one like the vaults of the interior. The balconies also taper - they are thinner at the edges to allow residents to view more sky and to accentuate the sense of light and space.”

The balconies were designed using Microstation 3D software, and the information was sent to specialist GRP form makers. “Obviously GRP is a more expensive option than timber, even though we have re-used forms as much as possible,” says Frigerio. “So to keep costs down, the formwork for the corner balconies, which do not have the ellipse details, was constructed from timber like the slabs.”