An architectural side note 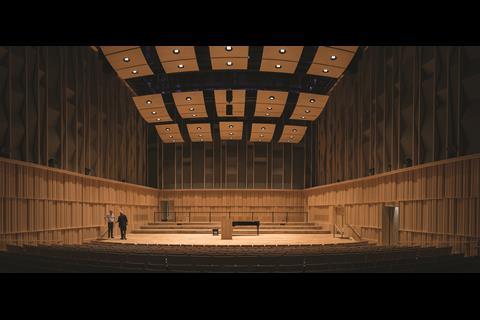 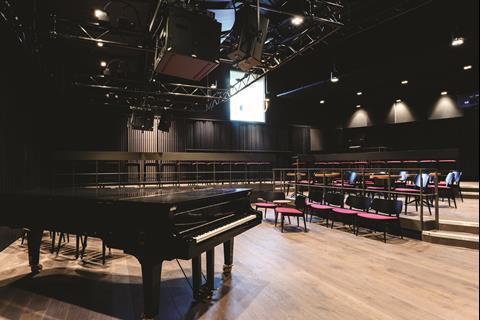 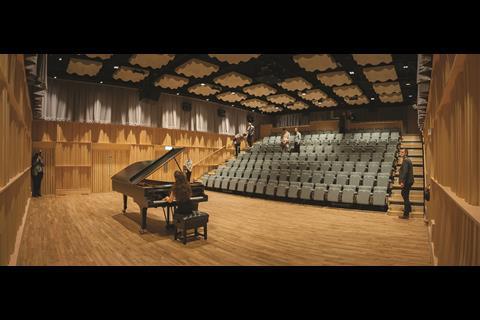 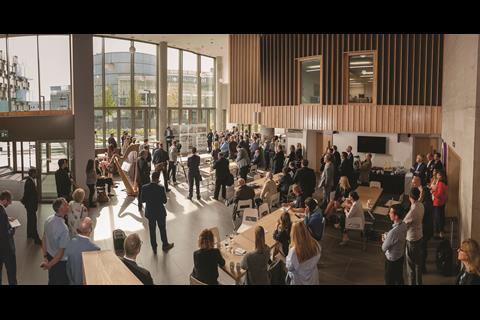 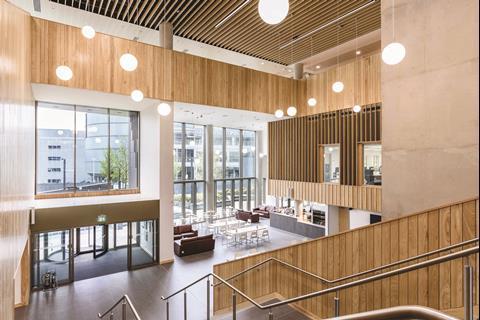 The foyer forms a north-south public route through the building 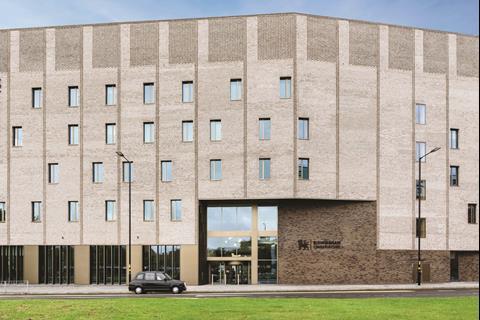 The £57m Birmingham Conservatoire is a quieter addition to the city landscape than many of the city’s recent projects – but its very restraint has produced an anonymous facade that conceals rather than celebrates the elegant music spaces within.

Birmingham has done much to reinvent itself in recent years – and architecture has been at the forefront of this process. Over the past 15 years its slew of seminal new buildings has included Birmingham Selfridges, Holloway Circus, the Cube, the Library of Birmingham and most recently the heroically reworked New Street Station. Each project has had the not-so-subtle intention of rebranding the city as a thriving cosmopolitan hub worthy of civic respect and ending Manchester’s inconvenient tendency to be seen as the UK’s second city.

This fierce determination has led to some equally forceful architecture. If there is any consistent thread that runs through Birmingham’s new generation of buildings – other than the ambition of civic reinvention – then it is a certain architectural brashness, garishness and noise. Accordingly, New Birmingham architecture can often embody a kind of lobotomised ostentation that leads to the creation of standalone objects rather than the coherent urban narrative from which the most charismatic cities are usually stitched.

However, there is now one major new Birmingham public building that has sought to buck the city’s recent trend for metropolitan bling and assume a more measured and considered form. The Birmingham Conservatoire is a £57m purpose-built and state-of-the-art home for musical teaching and performance, the first musical academy of its kind built in the UK since 1987. Constuction began in late 2015 and the building opened to its first students this week.

Headed by cellist and conductor Julian Lloyd Webber and owned and developed by Birmingham City University, the venue contains a 500-seat concert hall, a 146-seat recital hall, a 100-seat organ studio, a 100-seat black box experimental studio, more than 70 practice teaching rooms capable of accommodating up to 650 students and, most imaginatively of all, an 80-seat jazz club that claims to be the first permanent jazz performance space in any UK conservatoire.

Moreover, in seeking to match and overtake its competing London conservatoires such as Guildhall and Trinity Laban in London, it can already boast links to the Birmingham Symphony Hall, which is widely considered to be the best orchestral concert venue in the country.

But of course, from an architectural point of view, it is not so much what the new conservatoire offers that is intriguing but how it offers it and what it looks like. And when approaching the building for the first time, we can spot an instant break from Birmingham’s recent visual past. 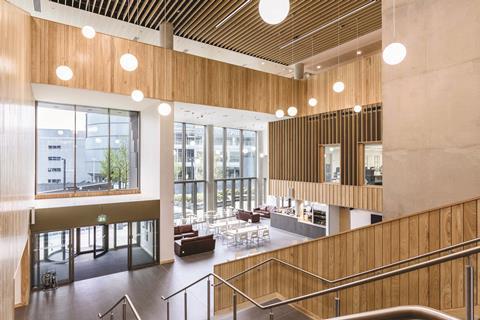 The foyer forms a north-south public route through the building

The first difference comes in the form of materials. This five-storey block is clad almost entirely in a pale beige-grey brick, thereby sporting a significantly more sober skin than many of its recent Birmingham contemporaries. Next, its form is relatively simple, a splayed triangle that gathers to form a needle-like prow at its northern end.

And finally, its elevational treatment reveals simple rows of small, punched windows occasionally broken by larger feature windows and all set amid continuous expanses of solid brickwork. Larger ground-floor openings trimmed with glass and aluminium pick out the entrances at either end of the building and vertical projecting brick courses separate the facades into vertical bays and gather below the roofline to form a continuous textured band that mimics the aluminium and base and seals the top of the building like a lid.

All very restrained and according to Feilden Clegg Bradley partner Tom Jarman, deliberately so. “Birmingham is full of brash architectural statements to which it is sometimes difficult to respond in a measured way. Everywhere you look there are so many loud and shouty objects but we wanted something much more considered that would bring coherence in an urban sense but would also bring coherence to the disparate array of scales and spaces being contained inside the building.

“So we have these heavy, solid external walls and a system of vertical ordering where the brickwork controls the disparate array of windows and openings. We then carve into the surfaces by introducing the bigger portals of the entrances and the bifurcation that cleaves the southern facade. But throughout, the principle of a solid, coherent envelope with a subtle diagonal quality as established by the footprint is maintained.”

Amid Birmingham’s rogues’ gallery of showpiece modern architecture it is indeed a welcome relief to find a new addition that is so carefully, cleverly and for that matter bravely understated. But the irony is that the understatement is overdone. By swerving from one extreme to another, the building cuts so plain and pedestrian a figure that it loses a sense of the presence and exhilaration that major public buildings – particular one housing a function as sensuous as music – should provide.

With its small windows punched into unremitting shafts of blank brickwork, it is not so much a concert hall the architecture calls to mind but a storage facility, student housing or prison. Yes, the building’s exterior plainness is eased by a sculptural severity that begins to add some charisma and in places conveys a utilitarian firmness that almost borders on the brutalist.

But the architectural concessions that relieve the surfaces, principally the projecting brick tassels that twirl down the facade, are too tepid to animate the vast expanses of blank wall they enclose. The blankness may well have been a result of the windowless concert halls inside. But the building’s function should be an opportunity, not a constraint, and the regimented vacuity of the south elevation in particular neatly sums up the larger anonymity that numbs the building’s exterior and sterilises its civic impact. 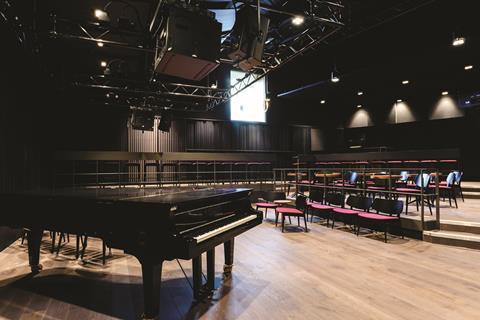 Generally, the interiors reveal considerably more energy and vigour than the building envelope.

A public foyer runs between the south and north entrances, free of security barriers and likely to live up to the conservatoire’s ambition that this becomes a genuine public space used as much by passers-by seeking a shortcut as by students and patrons.

The foyer itself is almost a theatrical space, offering a plunging staircase and a daylight-filled triple-height void whose shifting planes, encircling balconies and textured stone and wood surfaces already speak more eloquently of the movement and drama of music than the more pallid exterior.

The generous use of wood here on the balconies, stairs, walls and ceilings is the first introduction to a material that goes on to dominate the interiors, particularly the five key performance halls. Structurally, these spaces are heroic feats of technical engineering, with Jarman simplifying the overall structural concept of the building as a “Russian doll solution, where lots of different music can be practised and performed at the same time without disturbing anyone else”.

The “Russian doll” Jarman refers to is the “box-in-box” construction technique familiar to performance venues, which ensures that spaces are acoustically isolated from each other. At the conservatoire this is delivered by the performance halls being housed in structurally and acoustically independent steel frames, which are then slotted into the building’s overall concrete frame. Acoustics are also cleverly exploited as a decorative device in the main performance halls with all manner of ribbing, bobbling, undulation and perforation employed on the various timber, fabric and plaster acoustic panels attached to walls and floors to deliver the forensically determined levels of acoustic absorption or diffusion required.

The halls themselves are fine and elegant spaces, with the main hall and the recital hall the most impressive of the bunch. These are well-proportioned rectangular boxes with walls that come alive with sheets of luscious pale oak which, in the main hall in particular, convey an depth and movement that almost mimics the ripple and sway of fabric. In the lofty and majestic main hall in particular, the timber surfaces combine with some inventively atmospheric backlighting to offer a soft and organic counterfoil to the geometric precision of their overall space.

The performance halls are a masterclass in how restraint can be red-blooded – a more convincing edition of the anti-ostentation manifesto nervously penned by the exterior. It is unfortunate that the verve and dynamism of the performance halls is camouflaged under an inflexible brick cloak.

Of course, the unadventurous exterior does not validate Birmingham’s more garish architectural landmarks; architecture is never a binary choice between the iconic and the indifferent. Moreover, it is interesting to note that the city’s other world-class music venue, the Birmingham Symphony Hall, is another study in anonymity, discreetly located in the bowels of a conference centre.

But there is one final reason that might help explain the less assured note the exterior sounds: Birmingham’s ongoing capitulation to the car. The conservatoire sits on Jennens Road, which like many of Birmingham’s main arterial roads, is a thundering dual-carriagway that offers little in the way of street life and whose buildings are big, bulky blocks, trying to assert themselves over their road-dominated cityscape.

Even with its faults the conservatoire easily remains an infinitely better building than its neighbours. But an unconscious desire to hold firm against its soulless yet domineering fellow buildings along Jennens Road might be partially responsible for the hulking and unleavened profile it assumes. If so, this is yet more proof that the key to the civic reinvention Birmingham so desperately craves may not lie in libraries, towers or even world-class conservatoires such as this one, but in designing the car out of the city centre with the same vision, commitment and ambition with which it was put there in the first place.