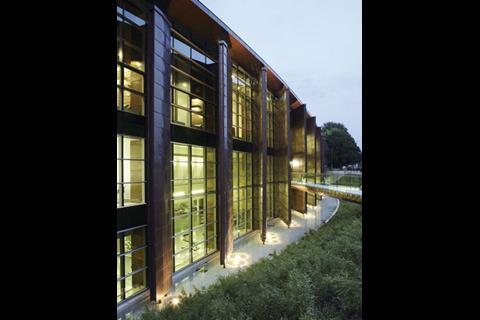 The exterior is clad in brass, which will help it to blend into its surroundings once it starts to weather 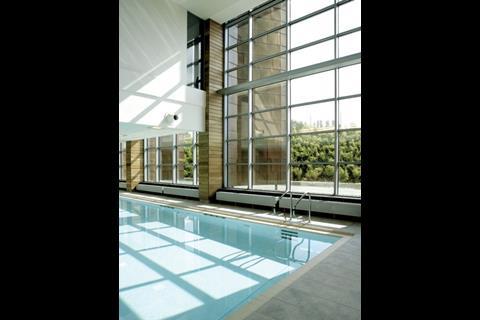 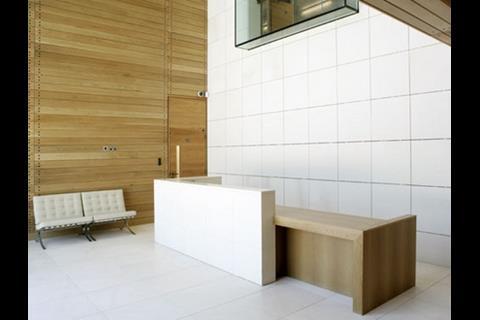 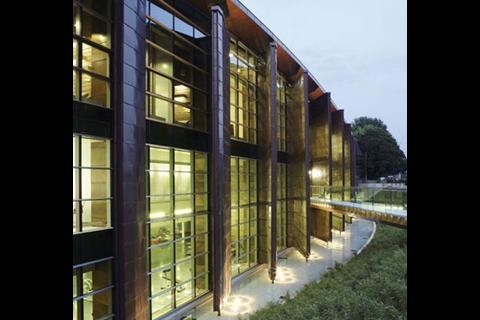 This building could decide who wins next year’s Premier League. Or it may if Chelsea FC find themselves in another close race and need to get injured players back on the pitch.

It is a central element of Chelsea’s training academy in Cobham, Surrey, and among its training aids is one of the UK’s biggest HydroWorx pools. Measuring 2.3 × 3.7m, it has an underwater, variable-speed treadmill and water jets that allow players to run in water without putting stress on joints while underwater cameras record their movements for later analysis.

The building also contains a complete range of hydrotherapy equipment, including a 15 × 6m pool with adjustable depth, hot and cold walk-in pools, a steam and sauna room and a spa pool. The building also houses changing rooms, a gym, medical facilities and a top-floor dining room.

Chelsea wanted a statement building, but the fact that the site was located in the green belt meant a delicate hand was required. “You have to reconcile creating a striking building for the club with what the planning authority will allow,” says John Hampton of AFL Architects, the practice that designed the ground (and which is, ironically, based in Manchester).

The building footprint could not be any larger than the buildings it replaced, so the hydrotherapy facilities were installed in the basement.

This presented plenty of construction challenges, says Murray van der Poll, a project manager for contractor Dean & Dyball. The building is located just outside the flood plain of the Mole river so the water table is high. Sheet piles were used to minimise the amount of water entering the site and the building has a 1m raft foundation with substantial reinforcement.

“The sheer mass of the concrete keeps the building down without the water pushing it up again,” says van der Poll.

The two storeys above ground are clad in brass, which Hampton points out is rarely used as a cladding material. But the intention is not to give the building a shiny footballers’ wives look.

“Brass weathers down to a mid-brown, mottled shade that helps the building blend into the green belt,” says Hampton.

Another feature intended to make the building fit in is a curved green roof that starts at ground level next to the football pitch. “It’s like we cut the pitch out and put the building underneath,” says Hampton.

So is this facility likely to help Chelsea clinch the Premiership title next year? Well, the bad news is that Manchester United has just bought itself a (somewhat smaller) HydroWorx pool too, so perhaps it’s back to the drawing board.