London’s £4bn Roads Modernisation Plan aims to radically redesign the way we travel through the capital’s streets. But it’s proving contentious - especially when it comes to the amount of money and space given to cycle lanes 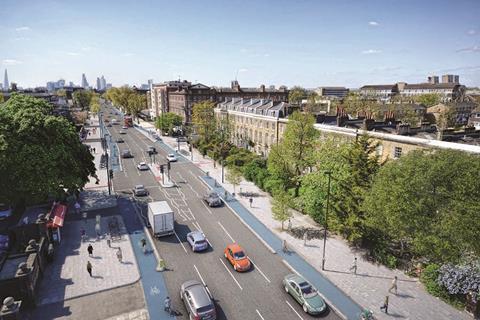 Roadworks are the perennial bane of any major city but over the past few months even the most accommodating of Londoners must have noticed with a sigh that the capital’s roads are being completely transformed. The most widespread and contentious example of this is the controversial cycle superhighway, the mayor’s pet transport project that is cutting an unprecedented and unapologetic swath through road space across the city.

To the frustration of many motorists and the incandescence of most taxi drivers, the width of already chronically congested arteries such as Blackfriars Road, Vauxhall Bridge and the Embankment has virtually been halved to accommodate the new segregated cycle routes, one of which (Barking to Acton) claims to be the longest in Europe. And their ongoing implementation has wreaked acute congestion and delays across the city - a situation which many believe will continue even after construction is complete.

But earlier this month an unrepentant Transport for London (TfL) risked terminal motorist apoplexy by proposing that the A40 Westway - the principal arterial route into central London from the west - should be reduced from six to five lanes with the liberated lane transformed into a “super” cycle superhighway.

But it is not just new cycle lanes altering London’s roads - notorious junctions and gyratories across the city are being extensively reconfigured too. For the first time in 65 years, Elephant and Castle, one of the most blighted and infamous road junctions in the capital, is no longer a roundabout, at least on its northern side. Two-way traffic has been reintroduced here with its south-eastern corner being reconfigured as a large pedestrian piazza that will link its centre to its edges at ground level for the first time. 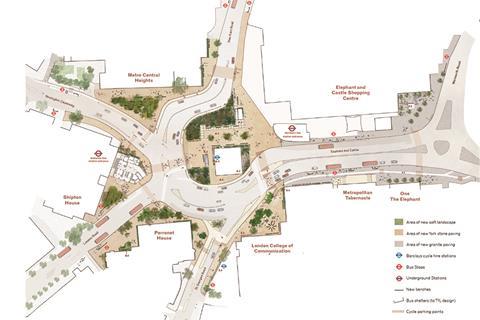 So what exactly is happening to London’s roads? The answer is a massive £4bn Roads Modernisation Plan which began last year and aims to adapt London’s largely Victorian road layouts for the 21st century by 2022. The city’s current population of 8.6 million is expected to rise to over 10 million by 2030 and TfL also estimates that the current 26 million daily journeys taken on London’s roads will increase to 31 million over the same period.

The Roads Modernisation Plan aims to enhance and increase current road capacity in order to accommodate this growth. As well as thecycle superhighway and intersection reconfigurations (referred to by TfL as Transformational Projects), it includes rolling road maintenance programmes, traffic signal modernisation schemes and the commitment to cut fatalities on London’s roads by 50%.

The conceptual origins of this plan are to be found in a comprehensive report that garnered little publicity at the time of its publication three years ago but is set to have a massive impact on how and for whom the next generation of London’s streets are designed. In 2012 London mayor Boris Johnson established the Roads
Task Force, an advisory panel made up of various design, planning and transport interests which, despite its dry municipal title, was charged with producing a strategic vision for the future of London’s streets and wider
public realm.

The task force’s 2013 report, which has been updated each year subsequently, is an impressively comprehensive work which establishes three core aims: “Transforming conditions for walking, cycling and public transport; delivering better, active and inclusive places and new city destinations; and maintaining an efficient road network for movement and access.” In other words, the report is seeking to establish how the competing interests that use London’s roads can be accommodated within a street infrastructure that sustains movement but is improved for all.

This is undoubtedly a worthy ambition but one which clearly requires a precarious balancing act - something the report itself ominously identifies. “The mayor must also recognise that this will entail making choices in particular locations - it will not be possible to cater fully or equally for everyone, everywhere, at the same time.”

It is within this heady theoretical mix of idealism, rivalry and reprioritisation that the Roads Modernisation Plan was born. 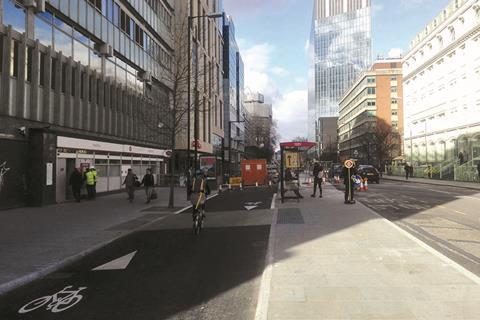 Leon Daniels, TfL’s managing director of surface transport, provides a corporate overview of the Roads Modernisation Plan’s ambition: “[It] is creating a greener, safer and more attractive London, including a radical improvement in conditions for cyclists. This programme is changing London for the better and we must work with Londoners, businesses, boroughs andothers to help people adapt.”

But what does this actually mean in practice and what physical impact is this massive programme having on road design and public space in the capital? Opinions vary sharply, but are debated most heatedly when it comes to the increasingly incendiary issue of cycle lanes.

At almost £1bn, improvements to cycling account for the single biggest chunk of the Roads Modernisation Plan budget. This emphasis has its roots in several concerns. The mayor’s ardent love of cycling is no secret and while the infamous “Boris Bikes” were actually developed by his predecessor, he has done much to foster what he likes provocatively to term “London’s cycling revolution”.

Equally, the Roads Task Force unashamedly prioritises cycling as “one of the greenest forms of transport that should be consistently encouraged” and identifies cyclists as a “priority group of vulnerable road users as they make up 80% of all those killed or seriously injured on London’s roads”.

But despite several grim and much publicised incidents of cyclist deaths in London in recent years, there are more positive statistics too. Cyclists now account for 25% of rush-hour traffic in London. With the number of cars driving in central London plummeting from 137,000 to 64,000 between 2000 and 2014, car use in the city has fallen by well over 50%. And what’s more, with cyclists trebling from 12,000 to 36,000 over the same period, TfL predicts that bicycles will soon outnumber cars in the centre of the city.

These are truly extraordinary statistics, unthinkable just a decade ago and unmatched in any other capital city in the world. TfL believes that roads should reflect these radically changing usage patterns, hence the segregated cycle superhighways cutting a swath through the city. 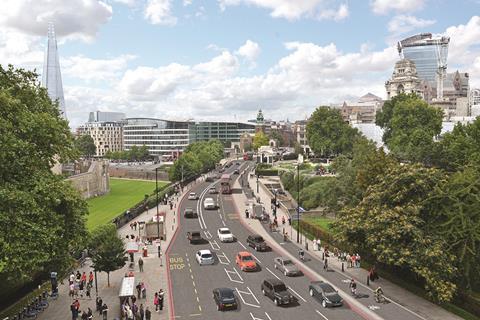 But at whose expense? Despite falling car use, congestion is still an enormous problem in London and many cannot see how halving the road space available to cars will help. Some have reasonably observed that cyclists’ safety is not the responsibility of car drivers alone, pointing out that some cyclists have already shunned the segregated lanes and that the now-common sight of cyclists listening to headphones is hardly conducive to hazard perception.

There is also resentment that so much public money has been spent on an unlicensed road user group that pays no road tax. Even the City of London Corporation took an unusual anti-establishment role when it claimed “the [cycle superhighway] proposals are too heavily biased towards cyclists with insufficient consideration given to the needs of other users”.

One of the most vociferous opponents of TfL’s plans has been the Licensed Taxi Drivers Association (LTDA) which, despite supporting the principle of segregated cycle lanes, has consistently criticised the superhighways on the grounds of safety, increased congestion, emergency access and impracticability.

While the LTDA recently lost its judicial review into the legality of TfL segregating roads without planning permission, even the most committed cyclist must ponder the statutory absurdity of the UK requiring planning permission for shop signs but not for 18 miles of reconfigured highway.

Surprisingly, TfL admits the superhighways will indeed lead to delays. A complex logarithm of calculations has led it to estimate that the segregation of the Embankment will lead to delays of six minutes for easterly car journeys. However, it maintains that a redesign of the scheme - which included reducing the two-way segregated bike lane from 4 to 3 metres - reduced this from 16 minutes.

While these figures are hotly disputed by the LTDA and others as being absurdly conservative, the truth is that nobody will quite know the full impact of this radical revision of London’s road layout until work on the cycle lanes is complete. Mayoral candidate Zac Goldsmith has said that although he hopes the cycle superhighways will work, he would have no choice but to “rip them up” if they don’t. But it is difficult to imagine this, considering the enormous disruption and capital expenditure they have already incurred.

It is, however, worth remembering the warnings of traffic Armageddon that were predicted during a previous major rethink of London’s public realm, the partial pedestrianisation of Trafalgar Square in 2003. Those fears have now proved unfounded, although, unlike the superhighways, the impact was largely local. 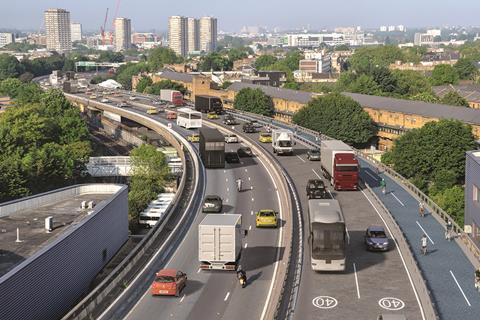 With all the focus on cycling, there is one even more essential road user group that risks being marginalised in
this radical reappraisal of London’s public realm: the pedestrian. There are more people in London than either bikes
or cars yet the superhighways offer them only mixed benefits. Segregated lanes will almost certainly make it take longer for pedestrians to cross roads; some estimates have put waiting times as high as six minutes at key locations.

And the segregated lanes will sometimes mean that pedestrians will have to navigate a new “no man’s land” strip of paving between cycle and car lanes in order to cross roads. It remains to be seen what contribution these empty strips of public realm will make to the streetscape and how they can be animated with anything other than bus-stops.

But, as we have seen, the Road Modernisation Plan is about more than the cycle superhighways and, along with the falling levels of car use in central London, its redesign of key junctions offers an opportunity to force a fairer distribution of space between car and pedestrian in the capital. This continuing disparity is still painfully evident at set-piece locations such as Parliament Square, Hyde Park Corner and Marble Arch but also in the countless impositions big and small that the car and its associated highway clutter still places on the pedestrian.

The city has been here before: the last generation of road renewal in the 1960s promised Londoners and visitors the same new urban utopia that is being pledged today but instead left them straddled with the toxic gyratories and sullen underpasses that TfL is now in the process of ripping out.

London is also facing the conceptual quandary it has often faced in the past. In Paris public space can be created or enhanced for symbolic value alone. But in London, with a few historic exceptions, civic improvement requires a practical purpose. It seems the bike has replaced the car as the preferred validator of renewal.

But with greatest respect to traffic engineers or cycling experts, they are not the ones best placed to enhance public spaces, as the 1960s, certainly with the former group, proved. Therefore it is hoped that the core design principles wisely identified by the Roads Task Force find a way of delivering fairness and securing the greater good among the competing and often fractious interests vying for recognition in today’s crowded public realm.