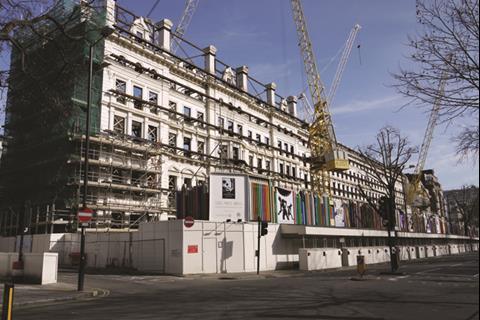 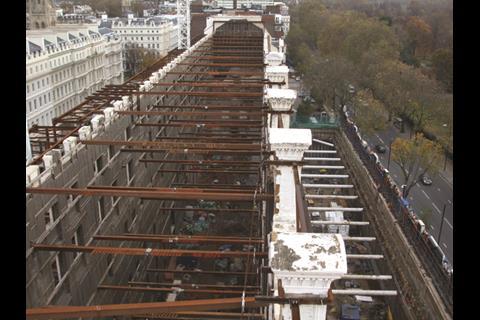 ﻿This was once a dilapidated hotel that just so happened to be on prime land overlooking Hyde Park. To convert it into luxury flats the whole thing had to be demolished and rebuilt – apart from the facade. Building talks to the team responsible for the largest ever retained Victorian elevation in the country

﻿As facade retention projects go, the £105m Lancasters development overlooking London’s exclusive Hyde Park is about as ambitious as they get. The 125m long, 26m high, six-storey terrace is one of the longest in London and is the largest ever retained Victorian elevation in the UK. The project involved the closure of the dilapidated 1970s hotel that once occupied the building, the complete demolition of everything except its grade II-listed facades and two original stone staircases, and, finally its conversion into 77 luxury, one- to five-bedroom flats, townhouses and penthouses, set to complete this summer.

To retain the facades, a labyrinthine latticework of 500 tonnes of temporary steel was installed to provide lateral stability during demolition and construction. Three levels were created for the 31,000m2 underground car-park and plant-rooms by excavating 24,000m2 of subsoil right in front of the terrace, all of which lies within metres of London Underground’s Central line. A private landscaped garden forecourt has now been placed above.

Throughout construction, the driving consideration was to minimise incursions onto the external fabric of the building and restore its historic character, much of which had been compromised by works undertaken during its tenure as a hotel. The Lancasters therefore lends itself as an innovative technical case study as well as an exemplar model of conservation architecture.

The terrace was built as 15 six-storey houses which completed in the 1860s. Each house had a triple bay frontage embellished with an ambassadorial scale and opulence that more closely resembled detached mansions rather than terraced townhouses.

Its architectural style combines the two key elements typical of mid-Victorian homes in the area: palatial domesticity and monumental scale. Accordingly, its spectacular frontage is entirely clad in stucco and has richly ornamental details such as rusticated quoins, heavy cornices, pedimented windows and segmental arches.

During the twenties the houses were divided into the flats and in 1970 the entire terrace was converted into a 392-room hotel. All its historic interiors were ripped out and structural and floor-plan alterations were implemented that further undermined the character of the original composition.

Several cornices were replaced with poor quality GRP mouldings, poor maintenance had led to peeling paintwork and the distinctive roof silhouette, clearly visible from Hyde Park opposite became overrun by plant and services apparatus. The hotel finally closed in 2006.

Northacre and Minerva purchased the site and appointed Nilsson Architects and Woolf Construction Management of Capita Symonds, to convert the terrace into luxury apartments. Demolition of the internal fabric began at Easter 2007.

During demolition, the rear facade, which steps down to a height of three storeys, was supported by a series of flying steel buttresses piled right through the existing building. These were inserted by creating openings through existing floor slabs and the roof and constructing a latticework of beams and braces to support them.

Horizontal flying steel shores were then built above and below each floor, enabling that floor to then be removed without compromising the facades’ lateral stability. As well as this, 700 2.8m by 1m underpins were excavated underneath the facades to provide vertical support. (These also enabled the lower ground floor level to be lowered in order to allow for the insertion of an acoustic floor slab required to absorb noise and vibrations from the nearby central line.) Demolition proceeded in this manner from one end of the terrace to the other, eventually leaving a cavernous open shell dramatically lacerated by 12,000m of temporary steelwork.

The building’s main frontage on Bayswater Road was next to the excavations for the underground car park in front of the building, so the flying buttress system could not be used. Instead, the facade was supported by a screen of horizontal steel walers that ran the full length of the terrace’s outer face. These in turn were fixed on by cantilevered brackets attached to the flying shores.

David Charlwood, project director at Woolf, describes the demolition and the vast temporary steelworks erected to prop the facades as the most challenging part of the project. “Water penetration through the old roof was also a major problem” he points out. And inevitably, as with all refurbishment projects, there was also the unknown. One of the team’s more unusual discoveries was that several of the triple-window bays within the facade were held up by one giant timber lintel. “We considered retaining these,” reveals Charlwood, “but water ingress had done too much damage.”

But despite the challenges, Charlwood insists that the complex temporary steelworks system adopted, comprised of incrementally assembled and dissembled buttresses, walers and shores was “essential in order to allow the underground car park to be constructed at the same time as the terrace was being demolished. Critically, it also ensured that none of the supports extended beyond the site boundary.” Thus it realised considerable contractual, programme and costs benefits.

The excavation for the three-level basement car park was also a major part of the scheme. Before the hole was even dug, 318 12m by 750mm contiguous piles formed a perimeter retaining wall. This is the part of the development closest to the Central line tunnels that run parallel to the basement. Throughout construction therefore, this area was closely monitored to ensure that it complied with London Underground’s onerous safety requirements and maintained its structural exclusion zone.

Once the entire internal fabric had been demolished reinforced concrete floor slabs were inserted between the outer walls. As each floor plate went in, the flying shores were removed, then the flying buttresses. Steel rib-deck flooring was used in the lower three-storey section to the rear of the terrace. A 190mm twin-leaf precast concrete German wall system was used for party walls. The 50mm cavity was cast in-situ.

Now complete, the facades have indeed been lovingly restored and are able to make a positive contribution to local urban character once again. The extensively repaired lime stucco render, painted brilliant white, looks resplendent. Plant and services have been cleared from the roofline and its original silhouette, so important when viewed from the park, has also been recreated.

Internally, lavish interiors use fireplaces and cornices to subtly recreate a historic character combined with a sharp contemporary feel. A sumptuous principal internal floor height of 4.8m has been optimised in selected areas by the addition of mezzanines fronted with frameless glass balustrades. Crucially, the mezzanines never extend to the outer edge of the floor-plan and do not therefore obstruct the windows or the generous views out over the park they offer.

Under-floor heating has been used throughout, although, unusually, the 315 windows that face out onto Hyde Park are single-glazed. “We weren’t allowed to use double-glazing” explains Chris Hinchcliffe, associate director at Nilsson, “as the reflective values onto the park would have been too great.” Prevention of condensation due to retained facades was also another major consideration, meaning all party and external walls are dry-lined and insulated.

With one-bed flats starting at around £1m and parking spaces at £175,000, it is tempting to compare the Lancasters with another symbol of domestic excess on the other side of the park, One Hyde Park. Charlwood points out that while both schemes clearly aspire to the same kind of exclusive residential elite, Lancasters maintains “a more historic character that combines the best of old and new.” Or, as Hinchcliffe points out, quoting from a senior executive involved on the project: “it’s the difference between a Bentley and Ferrari.”