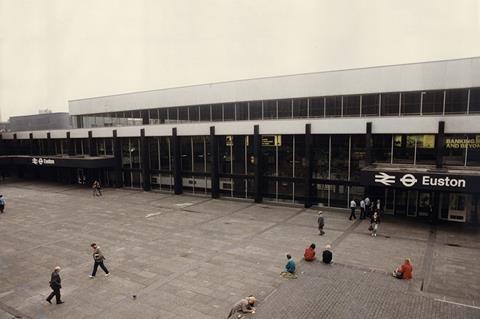 When Euston station opened its doors in 1837 the world had never seen anything like it. The world’s oldest functioning inter-city railway terminus was designed by celebrated neo-classical architect Philip Hardwick and was conceived on a scale and ambition that matched the revolutionary engineering achievement of the railways it was built to serve.

Its spectacular booking hall concourse was inspired by the temples of ancient Greece and featured a double-flight staircase, marble columns and an elaborate coffered ceiling, all dripping with ornamentation. But grandest of all was the towering Doric arch built as its entrance, the largest propylaeum arch ever built and a mighty stone gateway that symbolised the strength and confidence not just of the railways but of the era that produced them.

All of this was swept away in a few short weeks in 1962 when British Rail (BR) decided the station needed to be modernised and expanded. Despite international outcry, both the station and arch were demolished and replaced with the current terminus, designed by BR architect RL Moorcroft and, later, by heritage exterminator par excellence, Richard Seifert.

The new plans being put forward by HS2 amount to a shed being bolted on to an existing lean-to. Euston stands to have all of the blight with none of the benefits

The current Euston station - the sixth busiest in the UK - is relentlessly unlovable. Its coffin-like envelope, monolithic character, gloomy atmosphere and sterile public realm conspire to form an astonishingly dismal dystopia that seethes with architectural spite and aggression. The words of renowned US professor Vincent Scully regarding the controversial rebuilding of New York’s Pennsylvania station, itself demolished just months after Euston, could equally be applied here: “One entered the city like a god. One scuttles in now like a rat.”

Over the last decade, the successful redevelopments of neighbouring St Pancras and King’s Cross have placed the inadequacies of Euston sharply into focus and Network Rail became committed to the station’s exorcism. In 2007, British Land won the £1bn contract to demolish and rebuild the station and appointed Atkins and US masterplan architect Leo A Daly to work up proposals.

But then, in 2009, the government devised the High Speed 2 (HS2) rail scheme and, as it was decreed that Euston would be the principal London terminus, the redevelopment was put on hold with the intention of it being integrated into the HS2 project.

In 2012, Arup and Grimshaw were appointed to progress new plans for the station’s demolition and replacement with an HS2 terminus. But in April this year, it was suddenly announced that the demolition would be abandoned entirely and that the existing station would be retained, with HS2 platforms added.

The announcement has infuriated local Camden council, which has accused HS2 of afflicting Euston with all of the blight of HS2 without any of the benefits. Even London mayor Boris Johnson has hinted that he has concerns as to whether HS2’s plans will provide the capacity that the high-speed lines will require and has also reiterated » » the need for Euston to be comprehensively regenerated.

Although the Atkins and Arup schemes both exhibited worrying signs of the same anodyne and inhuman traits as the existing station - albeit expressed in glass rather than concrete - it seems logical to suggest that demolition and reconstruction presents opportunities that refurbishment and extension never can. So the question is, can the significantly less ambitious proposals now on the table really bring about the wholesale renewal that this blighted terminus so clearly needs?

HS2’s original proposals for Euston involved demolishing the entire building and replacing it with a larger terminus. Although this scheme would have necessitated the demolition of a number of public gardens and scores of residential and commercial properties, HS2 promised 1,500 new homes as well as commercial, leisure and amenity space in a new over-station development. 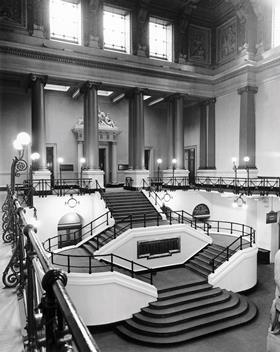 The revised HS2 plans now involve retaining 13 of Euston’s existing 18 platforms and installing 11 longer HS2 platforms alongside them. Most of these new platforms will be located in an extended structure built to the western side of the current station, thereby retaining the vast majority of the station’s existing fabric.

All platforms will be served by a combined and newly expanded concourse and the development will also include a new tube ticket hall and underground pedestrian link to adjacent Euston Square station.

Although the redevelopment will still require the demolition of several homes, businesses and public gardens, no specific plans to replace them are included within the revised proposals. Instead, the new consultation document makes rather cryptic references to over-station development opportunities being “outside” the remit of the hybrid bill required to process HS2 through parliament and thereby subject to progression “via the normal planning application procedures”.

One technical reason that HS2 cites for dropping the demolition proposals relates to the position of the platforms. An HS2 spokesperson explains: “On the former scheme, the regional platforms would have been lowered to the same level as the HS2 platforms; this will not now be taking place on the revised scheme.

“This will avoid the enormous amount of excavation and disruption to services which would have made it impossible to meet our opening deadline of 2026. Also, because of Euston’s critical position within the national rail network, we would not have been able to divert services or enjoy the luxury of closing the station during reconstruction as at St Pancras.”

However, another explanation that HS2 is far more reluctant to use is cost. By its consultation document’s own admission, the latest proposals will cost a whopping £400m less than the abandoned demolition scheme. Although HS2 concedes that this was a “factor”, it maintains that the “overriding issue was that the [former] proposal wouldn’t have been completed until 2028”.

HS2 chief executive Alison Munro justifies the revised proposals by saying: “Community concerns have been raised about the potential disruption caused by the redevelopment of Euston station. Following more work done by our engineers to find the best way to deliver best value for taxpayers, we have identified an option that we believe delivers great opportunities for the area while minimising the potential effects on local communities in Camden and on passengers.”

However, it seems that not everyone in Camden agrees with this synopsis, least of all council leader Sarah Hayward, who is scathing about HS2’s demolition U-turn. “The new plans being put forward by HS2 amount to a shed being bolted on to an existing lean-to. Euston stands to have all of the blight with none of the benefits. There will be no regeneration or economic benefits while homes will be demolished, communities destroyed and businesses wiped out. This entire scheme is ill-conceived and poorly planned - and Camden will bear the brunt of HS2’s incompetence.”

In the past, Camden has made no secret of its vehement opposition to HS2, but according to Valerie Leach, Camden’s cabinet member for regeneration and growth, “at least the former over-station proposals gave us the opportunity to negotiate what we would get out of the new development with regard to replacement of lost accommodation and amenities”.

Leach maintains that this is no longer on offer with the new proposals. “We’re extremely disappointed and frustrated with HS2 and it is becoming increasingly clear
that the government has not only grossly underestimated its cost but its wider impact on the Euston area. It’s incredibly difficult to get HS2 to even consider new mitigation measures; it will be left to us to bear the costs of the damage inflicted on our businesses and residents.”

What then would Camden like to happen at Euston? “Euston is a total nightmare,” continues Leach. “It has to be completely redone. Just look at the wonderful development that has happened down the road at King’s Cross and St Pancras. Just think what could be possible if the same thing happened at Euston. What we’d like to see is the station rebuilt in a way that helps rejuvenate the area - in fact, exactly what was being proposed in our Euston Area Plan, which was under way well before HS2 even came along.” 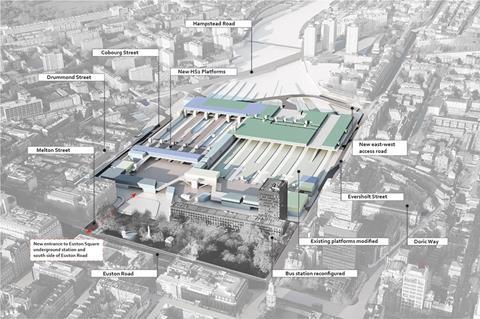 Euston’s survival in its present form is not yet assured: the consultation on HS2’s revised proposals closes next month and there is a chance, albeit slim, that Patrick McLoughlin, the secretary of state, will veto HS2’s plans before the hybrid bill is deposited in parliament by the end of the year. But for now at least, the rancorous sixties terminus appears to have been granted the stay of execution so cruelly denied to its predecessor.

It is interesting to compare the wider motivations of those responsible for reconstructing Euston today and those constructing it 176 years ago. If, as HS2 denies and Camden council insists, the demolition plans were abandoned on the grounds of cost, those costs only ever existed in the first place to pay for the vast over-station development that, paradoxically, rendered the actual station rebuilding financially viable.

No doubt Euston cost an inordinate amount of (private) money to build in 1837. But not so much as to obscure the core vision of creating an edifying monument to industrial and commercial progress that enriched rather than impoverished the civic realm. Perhaps the most poignant legacy of the current Euston debacle is that it shows how as a society we, or at least our political and property elites, have lost the ability to separate the civic good from the commercial gain.

As long as HS2 enjoys political consent, its influence over the future of Euston station will be inviolate. After already delaying the redevelopment for several years, it would be truly ironic if the scheme that has been pitched as the saviour of British transport infrastructure was now responsible for robbing Euston of the visionary renewal that it desperately needs.