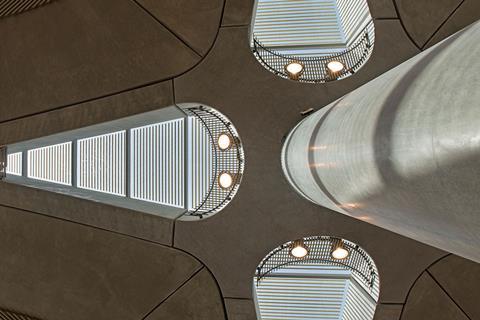 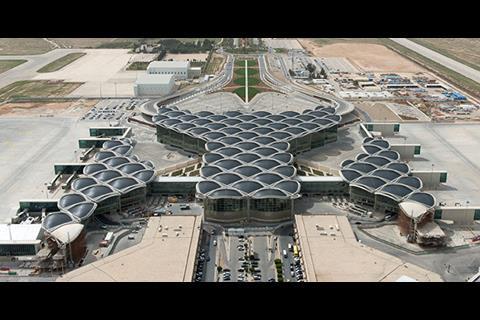 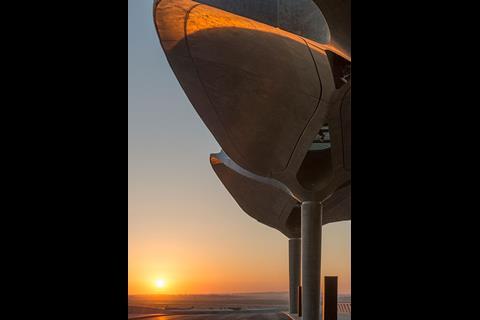 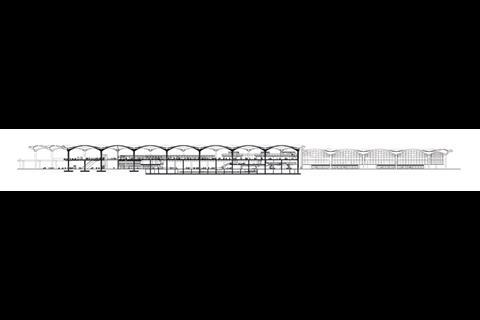 Functional, imposing, even quirky - buildings can be many things in the eye of the beholder. But in truth very few contemporary buildings aspire to the ultimate accolade - that of being beautiful. Foster + Partners’ recently completed project in Jordan is certainly one of that select group, and it is, of all things, an airport.

Emerging from the desert 35km south of the capital Amman, Queen Alia airport is an Arabian Nights fantasy of arches, domes and pillars stretching in tessellated patterns across the palatial expanses of its floorspace. Outside, palms sway in the desert breeze and beneath them families gather to greet or bid farewell to travellers. Aesthetically, this is as far from the identikit tubular steel terminals plonked outside many a UK provincial city as it is possible to get.

That the airport is built almost entirely from concrete is hardly a surprise. In this part of the world, where temperatures soar by day and plummet at night, stone and concrete have been the building materials of choice for hundreds of years. Concrete’s thermal mass is essential to even out the diurnal extremes of temperature, absorbing the desert’s heat in the day and releasing it slowly throughout the freezing night.

But even if passive temperature control were not the priority that it is in the Middle East, it is hard to imagine that any other material could achieve what has been accomplished here - because this is a building with curves.

The central terminal building is roofed with more than 50 shallow domes, each supported by four gently curving x-beams. These sprout like palm fronds from enormous column heads which top the gently tapering supporting pillars.

The curves do much to explain why Queen Alia airport is so easy on the eye, and also why concrete, with its ability to be moulded into almost any shape, had to be the material of choice. But there were other reasons too, as Foster project architect, Jonathan Parr, explains: “In the Middle East there is no real tradition of steelwork. But because concrete works so well with the climate, the resources to build with it - the materials and the skill sets in the local workforce - are all in place and well developed. And using a local material works environmentally on a number of levels and also helps the building to fit into its surroundings.” 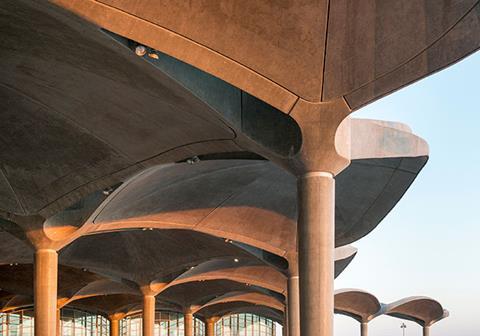 Indeed, it is the use of local aggregates, says Parr, that gives the concrete at Queen Alia airport its distinctive colour: “It is a light beige - a warmer shade than the greys we are used to in northern Europe.” This also gives the building the feel of having been sculpted from the local terrain - an effect the builders of ancient Petra, 200km to the south, might have appreciated.

Unlike Petra, however, Queen Alia has been constructed using an intriguing mix of in-situ and precast concrete technology. “The structure is supported by substantial columns made from reinforced concrete,” says Parr. “The airport comprises two, or in places three, storeys and in the lower ones these columns have parallel sides. But in the upper storey they taper gently outwards so the top, which supports the column heads, is wider. Structurally they work rather like the tapered legs of a dining table.”

Circular in section, these columns were cast in situ, using self-compacting concrete to give a naturally smooth finish. To ensure a regular shape, steel formwork was chosen to minimise deformation caused by the weight of concrete.

Nearly 4m wide, more than 7m high, and weighing up to 20 tonnes, these precast column heads were central to the whole construction process. “They had to be large to take the substantial stresses placed on them by the weight of the roof, and have sufficient height to allow them to blend into the curving x-beams,” says Parr. “In fact, the column heads were cast hollow, and had relatively thin walls. This made them much lighter than if they were solid, and allowed them to be lifted and manoeuvred into position more safely and easily.”

“Each column head is a four-pointed shape providing corbels to rest the x-beams on,” says Parr, explaining that the beams were, like the column heads, hollow to reduce weight.

“They are precast, with each beam split into a Y or wishbone shape, and the split ends engaging into two of eight ‘female’ pockets on the column head. The beams were supported on scaffolding - the non-split end meeting its counterpart coming the other way from an adjacent column.”

These beams were some 11m long in order for two, along with the column heads themselves, to span the 25m between columns. Once in place, reinforcement was dropped inside the beams and more in-situ concrete was used to in-fill and glue the beams to the column heads.

This process left each column with four beams “sprouting” from its head. Where the beams split as they near the column, they have left a series of tear-shaped gaps, which have been glazed to provide an elegant natural light.

By this stage, the beams, forming rough squares on plan, were ready to accept the precast dome segments. Each dome comprised eight segments which, after being lifted into position, were supported on scaffolding. “These rested on an invisible ledge coming off the beams,” explains Parr.

He adds that while the appearance of the concrete was vital to the overall architectural effect, it could not be considered independently from the construction and structural requirements: “For example, we spent a lot of time testing various concrete mixes to ensure a smooth interior finish with no stress lines, but the top surface of the segments was left deliberately rough and with steel hoops sticking out.” This provided a key for a topping of in-situ concrete, which was poured like icing over the dome segments to increase their thickness and strength, and to create a joint-free roof surface. “A dryish mix was used, and this, together with the rough top surface, prevented the in-situ from slumping off the domes.”

Each dome is protected from the desert sun by a layer of insulation and an aluminium shade sitting on upstands: “Because there is a gap of free-flowing air between the concrete and the aluminium, it helps keep the building cool,” says Parr.

Apart from an anti-dust coating on the columns, all of the concrete at Queen Alia has been left with a natural bare finish. “To us, concrete is a lovely material, and it should be left as such,” says Parr. “We were adamant it should stay untreated - especially because of the colour of the concrete. Such making good as was necessary we tried to keep to just cleaning and sanding smooth.”

The result is undeniably impressive, as the pattern of beams and domes repeats and repeats, calling to mind the many-pillared audience halls of bygone Eastern rulers. Jordan hopes its $960m (£624m) airport redevelopment will result in Queen Alia becoming something of a regional hub, handling up to 12 million passengers per year. They will, one feels, have much to admire. 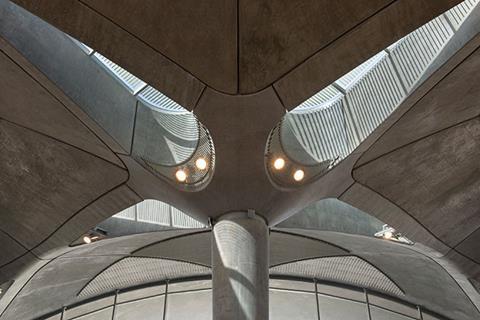 Creating steel moulds that precisely conformed to the curving geometry of the precast elements called for a high degree of collaboration between the designer, manufacturer and contractor.

“This was a really interesting process,” says Foster + Partners’ project architect Jonathan Parr. “We were able to offer a specialist architectural service - for example, we provided the geometrical information and cutting sheets for the steel sections to be made.”

The moulds were fabricated in Athens where specialist shipbuilding skills were used to create the curving shapes. “The moulds then had to be taken apart, shipped to Jordan and reassembled on site. We had to allow for that process in the design and try to avoid visible join marks.”

The fact that the elements were all large and yet hollow, with relatively thin walls, provided the second major challenge of the precast process. With wall thickness generally around 100-200mm, but as little as 40mm in places, strength was a priority. “The mix chosen was highly specialised as it had to be extremely strong, and yet able to produce a smooth finish suitable for the interior surfaces,” says Parr.

In the event, a steel fibre reinforced mix with a maximum aggregate size of 3/8 inch was chosen with 2% by weight of cement super-plasticizer and a high cement content. Because of the quantities involved (some 100 column heads and 720 dome segments), a dedicated production facility was set up close to the site with its own batching plant. Some 200 people worked at the plant producing up to two beams, one column head and eight dome segments daily.

Casting was performed by means of a steel bucket to control the flow, and the concrete was compacted with pocket vibrators. A steam-curing process was then used to ensure the concrete quickly gained sufficient strength to be demoulded onto specially designed supports.