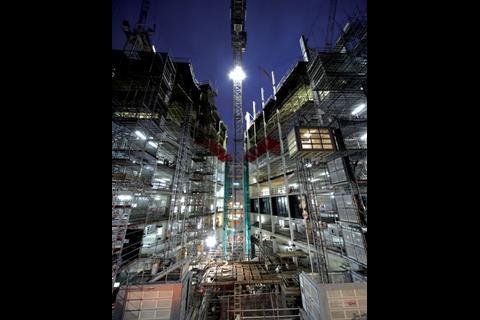 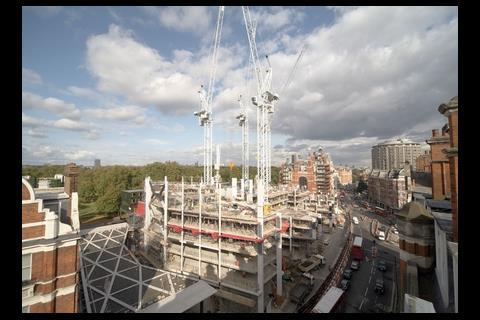 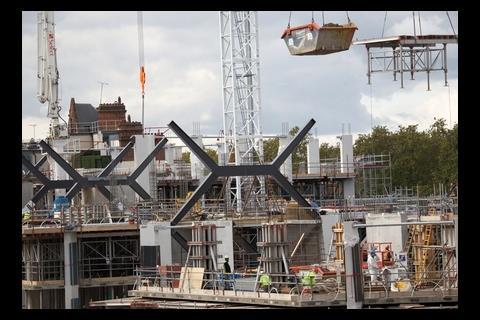 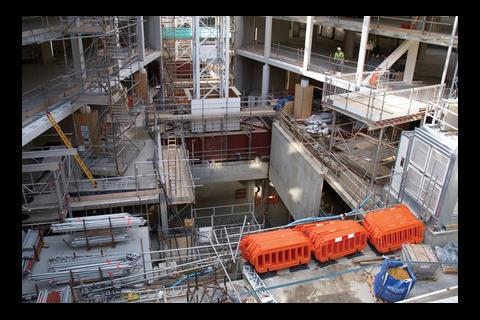 The basement has been constructed using top-down construction, enabling the superstructure to be built at the same time, which has saved six months on the programme. The earth is scooped out of these cut-outs in the ground floor slab 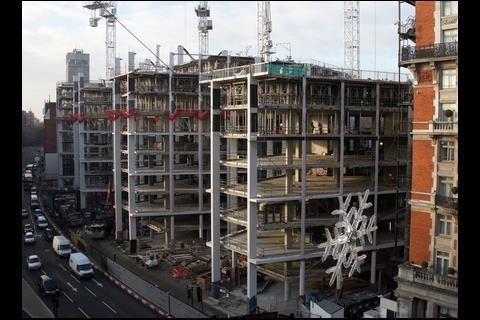 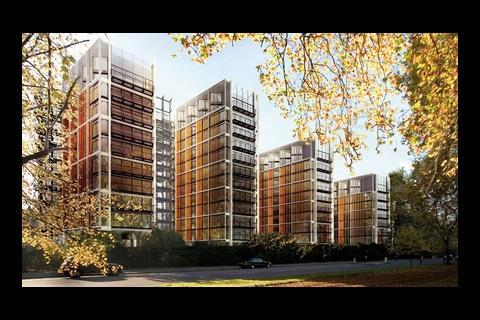 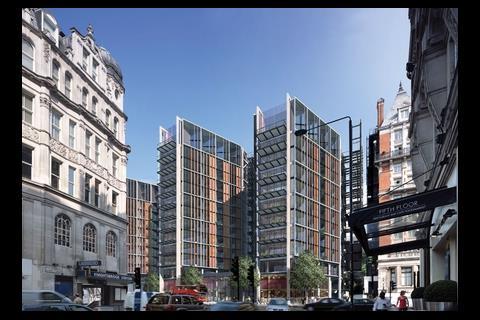 Visualisations of the completed scheme from rear and front

Candy & Candy’s One Hyde Park is coming along quite nicely, thank you. Which is just as well, because when you’re spending £100m on an apartment, you do rather want the builders out of the way before you move in

One Hyde Park is probably the UK’s flashiest job. Located in the heart of Knightsbridge in west London it is a housing scheme for the super rich. Last year a world record was set when one of its apartments was sold for £100m. In a market like this, the notion of downturns are meaningless (the super rich, as a rule, don’t do recessions).

Presumably this is a relief to Candy & Candy, the developer behind the scheme, and the rest of the project team. After all, the Candy brothers’ other big schemes, Chelsea Barracks and Noho Square, are both looking distinctly wobbly at the moment. But One Hyde Park is different. It’s a no-expense-spared job with a project value of £490m, which is a hell of a lot of money for 86 apartments on a site less than one hectare in size. Value engineering is not a phrase that is bandied around on this project and according to Nick Williams, Candy & Candy’s development manager, the team was selected on ability rather than price. “This is the best project in the world so we wanted the best team in the world,” he says proudly. “There was no tendering; we selected the key subcontractors then agreed a price.”

This also applies to the main contractor, Laing O’Rourke. It’s a design-and-build contract but with a negotiated figure. Predictably, the specification is top notch; even the concrete used for the structural frame looks posh. So what is it like delivering “the best project in the world”?

If selling property is all about location, Candy & Candy has got it sewn up. One Hyde Park is on the junction of Knightsbridge and Sloane Street, which makes it handy for Harrods and Harvey Nichols over the road. The scheme was designed by Rogers Stirk Harbour + Partners and consists of four elongated hexagonal blocks or “pavilions” linked by stair and lift cores (see box, page 51). The idea was to maximise residents’ views over Hyde Park at the rear and London to the front. The apartments range in size from 1,000ft2 to penthouses that sprawl over a staggering 27,000ft2. They will come with top-of-the-range kitchens and bathrooms, of course, but bedrooms and living areas will be left for the residents’ interior design teams to finish off.

Like any developer, Candy & Candy wanted to build the development as fast as possible to maximise its returns. One complication was that the developer wanted to hand over all the apartments to the owners at the same time, as the sort of people who would live there were hardly likely to tolerate builders drilling and banging away next door.

So some careful planning was called for. A mock-up of an apartment was built in a warehouse in north London to give contractors and specialists an idea of the quality required. “It was incredibly informative,” says Paul Lynchehaun, project director for Laing O’Rourke, “much better than a 3D model as you could see and touch it. It helped demystify what was required and helped with the costing.”

The choice of construction method for the real thing was dictated by the programme and the proximity of neighbouring buildings. The Mandarin Oriental hotel is inches away from the east side and a residential block borders it to the west; then there’s the Piccadilly line, which runs close to the south-eastern corner.

The team opted for top-down construction for the four-storey basement despite its additional cost. This meant sinking a secant pile wall around the basement perimeter, followed by plunge piles: steel columns encased in weak concrete that supported the basement floor slabs. The ground floor slab was cast first, then earth was painstakingly scooped out through holes to create the lower basement floors, which were cast as the excavation proceeded downwards.

The big advantage of this approach was that it meant neighbouring buildings were less likely to move than if conventional bottom-up construction were used. It also meant work could start on the superstructure immediately. “We can go up and down at the same time, which saves six months on the programme,” says Lynchehaun. “We’ll have topped out the whole development before we finish the basement.”

Unfortunately, the developer’s plans got stuck in traffic, so to speak. There had been a convoluted arrangement of roundabouts in front of the original sixties office building. These were redundant, so Candy & Candy bought them and added the area to its site, thereby increasing its size by 15%. The snag was that the road junction in front of the plot had to be realigned, and until that was completed, piling could not start on the section of secant wall occupied by the roundabouts.

This meant negotiating with four highway authorities, Transport for London (TfL), the Royal Parks and Westminster and Kensington and Chelsea councils. It took two years to get agreement on the road layout – then TfL would not let Laing O’ Rourke do the work. Piling started on the secant wall in February 2008 and TfL started on the road works in March. These took six months to complete, to the disbelief of the team. “It was a nightmare for Candy & Candy and very frustrating for us,” says Lynchehaun. “We had to work piecemeal on the secant wall until we got full possession of the site in August.”

Meanwhile, work started on the superstructure where there was access; by August one pavilion and half of two others were up to four floors high. But progress since then has been remarkable thanks to the special concrete frame being used by Laing O’Rourke. “It looks simple but a lot of work went into getting it right,” says Lynchehaun.

At first sight the frame looks like a standard insitu concrete job, with post-tensioned floor slabs to minimise their depth. But Candy & Candy did not want ordinary perimeter columns as they would take up space in the apartments. So it made these part of the facade, and finished them to provide a visual link with the stonework of adjacent buildings.

The edge columns are precast concrete with a difference. The mix contained crushed limestone for whiteness and mica for sparkle. This has been acid-etched to give a slightly roughened, stone-like appearance. This looks remarkably sophisticated, but why not just use ordinary concrete columns and overclad them with stone? Because that was anathema to Rogers Stirk Harbour + Partners, which believes strongly in the modernist ideal of honesty in materials. “Cladding the columns is like dabbing wallpaper all over them; we just don’t do that,” says partner Graham Stirk. He adds that the precast columns are cost effective as they are faster and simpler to erect: critical on a site with almost no access or storage space.

The two-storeys-high edge columns were erected first, followed by the interior columns, some of which were also precast to save time. Then the shuttering for the floor was put up and the post-tensioned slab cast. The edge columns were strong enough to withstand the tensile forces from the post-tensioned slabs, and to prevent cracking in the middle when the second slab was cast.

The variety of apartment configurations meant that Candy & Candy did not want internal structural walls. Lateral stability was provided by large steel x-shaped, expressed cross-braces. These occupied each floor on either side of each pavilion. The edge columns adjacent to them were made from steel fabricated by Watson Steel. These were shipped to Malling Precast, a Laing O’Rourke specialist company, where they were encased with a special concrete mix, then shipped to site. Once erected the steel cross-braces were bolted onto projecting lugs on the columns.

As the frame moves towards the topping out date in May, the cladding is being installed lower down. This is prefabricated as triple-glazed panels with an interstitial blind. Solid areas have a heavy-duty fibre-reinforced cement board. The prefabricated service modules are beginning to go in and the interior fit-out is just starting. Lynchehaun says it will take 40 weeks to complete each floor, and once these are finished they will be locked off ready for the residents who move into the development in October 2010.

Six months in the park

One Hyde Park consists of four blocks shaped like slightly flattened hexagons separated by access cores. This configuration means natural light reaches as much of each apartment as possible and it also affords views out over London. The main living areas are positioned at the ends of each block and the bedrooms at the sides.

Transparency is a Rogers theme repeated elsewhere in this scheme. For a start, the separate blocks create a permeable link between Knightsbridge and Hyde Park. The access cores are all glass, including the lifts for residents and staff. To stop residents being able to see into the blocks opposite, carefully angled vertical screens have been used, which also offer solar shading. The screens are made from patinated copper that is intended to provide a link with the predominantly red brick architecture of Knightsbridge.

Thirty-six full-time staff will be employed for duties, including valet parking in the underground car park, concierge services and cleaning. The building is linked by a tunnel to the Mandarin Oriental hotel next door so residents can call for room service. The circulation has been cleverly arranged so staff access apartments using separate stair cores from residents.

Has the credit crunch affected sales? “I would be lying if I said there was no effect at all,” says Nick Williams, Candy & Candy’s development manager. He says just over half the apartments have been sold but that sales have slowed up. Despite this, Candy & Candy has no intention of dropping its asking prices. Buyers pay a 40% deposit upfront, another 10% once the building is watertight and the balance on completion. This should help ease cash flow and means buyers are unlikely to walk away. Don’t the buyers object to this? Apparently not. “They are used to buying jets where staged payments are common,” says Williams.