In XS: Highlights from from XS Extreme 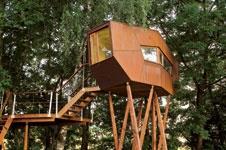 Some highlights from XS Extreme, a book showcasing perception-defying architecture, from the wilds of Chile to, er, Lincolnshire

Small can be beautiful. That’s the overwhelming impression you get from XS Extreme, a new book collating some of the most creative and exhilarating smaller projects around the world.

Although some well-known architects feature – including Herzog & de Meuron and Snøhetta – it is mostly the work of smaller, emerging practices like Fernando Romero and McChesney Architects. As well as McChesney, British firms Gollifer Langston, Atelier One, Charlie Whinney and Jack Woolley are among those with buildings profiled.

The book is the third in a series, and looks at architects who either build in extreme places or create extreme buildings. Author Phyllis Richardson describes them as architects who “stretch definitions, perceptions and expectations, as well as, in a more literal sense, material performance, site specificity and/or function”.

The selection shows some of the highlights of a book that could almost be used as a catalogue of exciting designers of the 21st century.

This is not your average tree-house. Designed by architect Andreas Wenning for his own home and built out of Cor-Ten steel, it sits 4.5m above the ground. Wenning has made a comfortable interior with oak panelling and insulation, and has even wired up a stereo and lighting system. Its geometric design was inspired by the military vehicles in the Star Wars films.

Herzog & de Meuron’s brand of computer-aided genius, as displayed by the Bird’s Nest stadium for the Beijing Olympics, finds a more compact form in the delightful Reading Space made from dyed concrete and built using on-site formwork. The architect was so happy with the result it made two more in Genoa and Basel.

It’s fair to say Rodrigo Sheward’s timber structure won’t have many passing visitors – it is 2km from the nearest dirt track and 12km from the nearest village. But hikers who do make the pilgrimage will be rewarded with a clean, sustainable structure made of timber from local fallen trees, and crafted by a furniture-maker with an ox-drawn sawmill.

These young architects from Poland have come up with a conceptual approach to expanding dense urban environments – single-person dwellings modelled on the idea of an advertising billboard. The occupant would live in a 63m3 steel-framed space, with all support systems piped through the building’s single structural leg, which is set in reinforced concrete below.

Commissioned by sustainable transport charity Sustrans to mark the beginning of a cycle route, this stairway to nowhere in the heart of Lincolnshire is almost a piece of unexpected “found architecture”. You can imagine similar structures remaining in disaster-ravaged landscapes in Louisiana or Sri Lanka. But the Dutch architects’ outlook has found many uses, from a birdwatching shelter to a platform from which to view the flatlands of north-east England.