Before he died in 2007, the legendary Japanese architect Kisho Kurokawa sketched out a swirling, ‘dragon-tailed’ cancer care centre in Swansea. Now the UK’s 13th Maggie’s Centre has been completed in titanium-studded concrete by Garbers & James 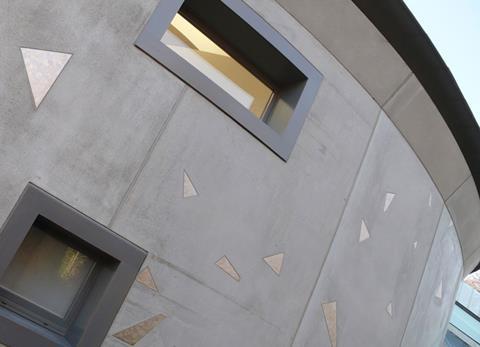 There is no reception desk to greet visitors to the new Maggie’s Centre at Swansea’s Singleton hospital. Instead there is a log fire and a large kitchen table, complete with well-stocked kitchen. Tubular steel and hospital green are notably absent. No wonder the first thing visitors tend to do when they arrive is relax, sit down and have a cup of tea.

This is, of course, the whole idea. Maggie’s Centres were conceived by the late writer and garden designer Maggie Keswick Jencks and her husband, the architectural critic Charles Jencks, to offer cancer patients non-medical support within a restful and pleasant environment away from the harsh functionality of hospital. The centres - Swansea is the 13th to be completed - have been designed by a who’s who of international architecture (see box, below), and the latest comes from a concept design by the late Kisho Kurokawa, one of the founders of Japan’s postwar metabolist movement.

The metabolists’ vision seems to fit neatly with the Maggie’s philosophy, their buildings being far more organic than the functional and mechanistic European modernism of the same era. And the Swansea centre follows in this tradition, using concrete to create a fluid, natural structure that is also reassuringly solid.

Thore Garbers, who with partner Wendy James was executive architect for the scheme, says: “I felt the centre needed a weight, a permanence. Some of the buildings you see around hospitals look like they could be blown away by the wind. Some actually are temporary. We wanted something different.”

The centre’s robustness, says Garbers, creates the feeling that those inside are protected, and from more than just the weather which sweeps in from Swansea Bay. “See the centre in the evening,” says Garbers, “with the light shining out through the windows, and it is something like a castle. You know that inside there is warmth, light - safety, if you like.”

In fact there is much about the design of the centre which works to give the building its kindly aspect. The exterior concrete, for example, is inset with hundreds of triangular titanium plates that sparkle in the sunshine or, perhaps more likely in South Wales, glisten in the rain. But most obviously it is the centre’s extraordinary shape: a vortex or swirl on plan - two tapering dragon’s tails snaking left and right in elevation - which amuses rather than threatens. Curves are everywhere, and they substantially soften the building’s appearance.

The foundations at least were pretty straightforward, says Garbers. “The site was previously occupied by four small doctor’s residences which had been constructed on a filled bank. Two were demolished to make space for the new centre and two were converted for use as a temporary place for Maggie’s to set up in.”

“See the centre in the evening and it is something like a castle. You know that inside there is warmth and light.”

Main contractor Sir Robert McAlpine poured the floor slab in late autumn 2009 and then set about constructing an in-situ reinforced-concrete frame comprising columns and a ring beam at first-floor level. A first-floor slab was then cast with a large cut-out for the elliptical central entrance area with its wide curving staircase.

The 56 precast panels that clad the centre, cast in a self-compacting concrete with a pale cement and limestone mix to give a light, smooth finish (see box, left) were installed in June 2010.

Garbers says: “To prevent cold bridging between the frame and wall panels we covered the frame in 50mm of rigid insulation. Delivery of the panels was carefully timetabled because, this being a hospital site, you can’t have lorries queuing up and blocking the entrances. It worked very well and we dropped them into place in just two days.”

Behind each precast panel is timber studding and 100mm of Kingspan insulation. The interior is painted plasterboard.

Considerable effort went into the panels’ titanium decoration. “Each plate had to curve with the radius of the panel,” says Garbers. “In all, there are nine different shapes, but these are flipped and rotated to give the appearance of many more.”

The titanium plates fit into shallow recesses in the concrete, and these were cast into each panel by fitting into the moulds pieces of acrylic sheet, cut to match the titanium. “It required a lot of coordination between us, the precaster and the US-based titanium manufacturer.”

The roof also required a bespoke approach. Garbers explains that a long tubular steel spine runs from the end of one dragon’s tail to the other via an elliptical loop, which supports the roof around a central circular rooflight. “Timber rafters come off this spine like fishbones, and these were covered by a plywood ‘stress skin’ before the zinc cladding was applied. We then blew particle insulation into the voids between the rafters through specially drilled temporary holes.”

Inside, the interior is surprisingly efficient and practical. Within the “tails” on the ground floor are two large multi-purpose spaces which are used for anything from yoga classes to meeting rooms. Nearer the heart of the building are two smaller counselling rooms and two WCs. The first floor is somewhat smaller, due to the slope of the tails, but there is still room for an office, a small counselling room and a library. There is also a panoramic window looking out to sea - a popular spot where people can simply sit, rest and enjoy the view.

“You can actually see the effect this building has on people as they walk through the door,” says the centre’s head, Debbie Horrigan. “Their shoulders relax and they almost sigh with relief as they walk into a building that is spacious, light and airy.

“And the funny thing is that it doesn’t matter whether it is fully occupied and busy, or with only a few people around, it is always a calm, comfortable place to be. It’s got a lovely vibe about it.”