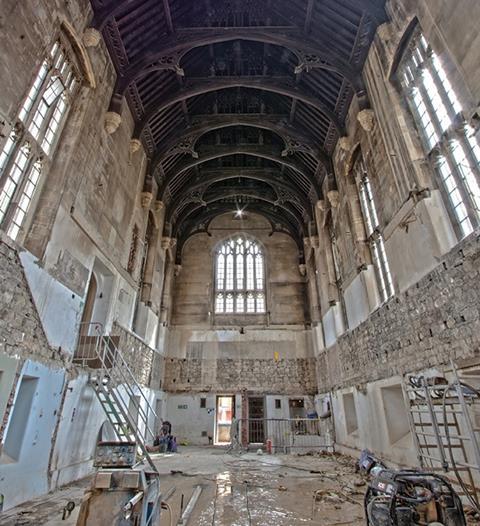 Giles Gilbert Scott is one of the most celebrated British architects of the 20th century. A superlative body of work includes Battersea and Bankside power stations, Waterloo Bridge, Liverpool Anglican Cathedral, the post-war reconstruction of the House of Commons and the iconic red K-series telephone boxes. Accordingly many of his commissions have helped forge the modern British landscape that is so familiar to us all today. But even great architects suffer moments of weakness and Scott had his in Oxford.

Magdalen College is one of Oxford’s most venerable academic institutions and counts Cardinal Wolsey, Oscar Wilde and the current Chancellor of the Exchequer among its alumni. While the college dates from 1458, Longwall Quad contains some of its most recent additions. The most prominent building on the courtyard is Grade II* listed Magdalen College Library, a gothic revivalist chapel-like structure designed by Victorian architect John Chessell Buckler in 1851.

While the library occupies the quadrangle’s south side, the north includes a range added by Scott in 1930. The range itself is a convincing piece of 20th century gothic and chimes well with Buckler’s library opposite and the older perpendicular-style block in between. Where Scott falters is in his renovation work inside the chapel. Here, he savagely severs what was once a lofty, soaring single volume by adding a new floor slab half-way up that also crudely subdivides the library’s full height windows. 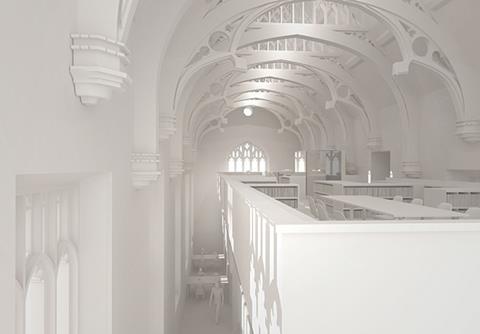 When completed, the renovated space will feature a free-standing, three-storey steel and oak bookcase structure

While Scott’s renovation sullied the purity of Buckler’s design, it did provide the library with more accommodation. But even this soon proved inadequate. Scott’s work offered space for 12 readers and a librarian, but today the college needs space for 120 readers as well as for expanded staff and storage facilities, plus 3,000 linear metres of book space.

Additionally, in recent years the physical fabric of the library has deteriorated into a poor state or repair with the roof admitting copious amounts of rainwater and both the stone and woodwork becoming increasingly stained and damaged.

It was at this point that architects Wright and Wright were appointed to renovate and expand the campus. The project is now under construction and is scheduled for completion in early 2016. Local contractor Stepnell, whose extensive experience of Oxford college construction projects left them well versed in the challenges presented by amending historic fabric, were appointed as main contractor under a traditional JCT contract.

While this design solution may seem simple enough, the site and historic fabric presented a daunting set of constructional challenges that added several layers of complexity to the project build. The first was access. As with several of Oxford’s historic collegiate courtyards, Longwall Quad has only one point of entry, a narrow single-storey gothic archway at its south-west corner. 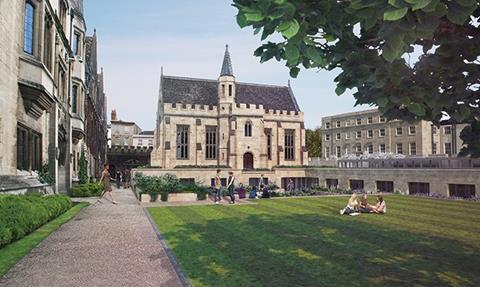 While undeniably charming, this access proved insufficient to accommodate the large volume of materials, excavation debris and constructional machinery and apparatus required for the build. The solution was to widen the access by carefully dismantling the arch, cataloguing it and storing it while construction works take place. Once they have been completed the arch will be rebuilt and restored to its original position.

A far more onerous challenge was presented by the ground works. Part of the external courtyard level is being lowered in height by a full floor to achieve level access between it and the partially submerged new L-shaped basement being constructed underneath and beside Buckler’s original library. This presented two significant problems, ground water and archaeology.

Much of Oxford is built on flood plains and Oxford itself is subject to regular flooding, as was the case last winter. While ground moisture had not in any way destabilised the structural integrity of the existing building, preventative measures have been employed to protect both the construction site and the redeveloped building from future water exposure and ensure that it can withstand a “once in 100-year flooding” scenario. These measures have taken the form of mini wells that have been installed across the site to “de-water” the ground.

While Stepnell director Tom Wakeford concedes that significant flooding risk to the building is not a huge concern, the technical approach to dealing with groundwater is part of a wider “de-risking” adopted for the entire construction programme. “We can’t assure the client that Oxford will never flood but we can be completely honest with them and manage expectations as to what is reasonable for us to do. In the instance of groundwater, this has involved inserting the wells, putting in as much monitoring kit as possible and constantly following the results.” 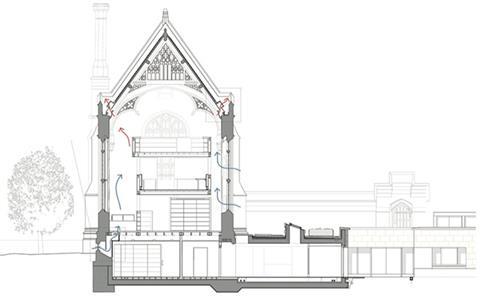 But another aspect of ground works presented an even bigger risk to the project than water: archaeology. Refurbishment projects are infamous for the unknown quantities that can spontaneously emerge, and Wakeford describes archaeology as one of the “biggest unknowns and a significant potential risk” to the project programme.

Like much of the centre of Oxford, Longwall Quad is essentially built on a grave site; more than 100 bodies were discovered when initial trial pits were dug as part of the enabling works. Such gruesome discoveries are a common part of construction in the city and time for archaeological analysis is normally worked into the programme.

But due to the specific design solution at Magdalen Library, this period of archaeological research had the potential to significantly delay the project. This is due to the fact that Buckler’s library is being renovated sequentially from the ground up. First to come will be the basement and courtyard excavation works which partly lowered the level of Buckler’s original basement.

Then comes the construction of a new ground floor slab to Buckler’s library on which the new, internal, free-standing three-storey steel frame can be built. And finally the roof is to be entirely removed, restored and rebuilt to modern thermal and ventilation standards. None of this could take place until archaeologists had completed their research, thus allowing construction of the basement, thereby potentially delaying the entire scheme by months. 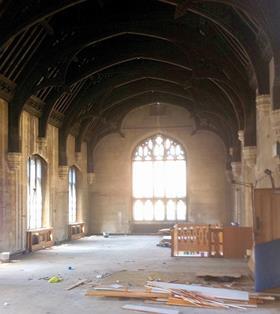 However, Stepnell used a form of top-down construction to avoid this scenario. As the only contractor to suggest this particular selection it was also crucial to its winning the two-stage tender process. By constructing the new ground floor slab first, it essentially created a permanent pseudo-crash deck that has enabled the roof and free-standing steel frame works above the slab to proceed independently of the basement and archaeology works below. As the ground floor slab had already been designed to take the heavy loads required for the oak and steel frame bookcase structure above, it provided the necessary support for the building even without the basement sub-structure being complete.

This solution reflects the programme-led philosophy which underpinned their bid, as Wakeford explains. “The programme was always critical. The client wasn’t necessarily interested in achieving the shortest programme but they wanted certainty. Therefore we explored programme before price.

“The sequential phasing of the project that resulted was the most important part of de-risking all the works. Separating the roof and the archaeology enabled specialist subcontractors to be involved at an early stage and created a more certain critical path.”

Once the ground floor slab had been constructed, archaeologists could proceed underneath without interrupting work above. But the basement works presented challenges of their own. The floor of the original basement had to be removed and lowered in order to accommodate the new spaces allocated here.

However, the limited foundations to the original building meant that ripping out the basement in one go was not feasible as this would have compromised the structural integrity of the entire building. Moreover, access to the basement, via a couple of widened doorways, was also severely restricted.

The underpinning solution essentially divided the basement floor into strips numbered as alternating “ones” and “twos”. First, the “ones” were removed as sequential strips, allowing archaeologists to study the voids left between the remaining “twos”.  Once archaeologists had finished with their analysis, the new basement floor could be inserted into the “ones” after which the whole process could begin again with removal of the “twos”. 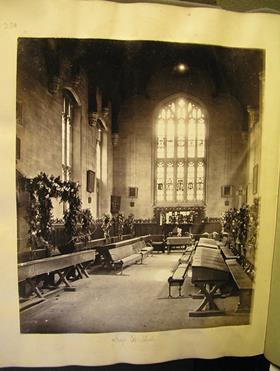 This solution presented three advantages. First, by removing the basement incrementally rather than in one piece it enabled the basement walls to remain in place which in turn ensured that the structural integrity of the entire building was maintained throughout the substructure works. Secondly, the strip solution enabled work on construction of the new basement to proceed while archaeologists were still investigating parts of the original basement. And finally, by removing the basement in smaller parts by using floor saws and block breakers, it allowed the debris to be manually removed, albeit painstakingly, by wheelbarrow through the restricted access openings.

Apart from archaeology, Wakeford describes the roof as the other “big unknown” on the project. Wright and Wright have worked with environmental engineer Max Fordham to devise an ingenious passive ventilation system to prevent overheating and improve acoustics. Externally, the roof will look the same but concealed behind its castellated parapet will be new glazed vents that will admit light and air through the original internal filigree pattern timber ducts embedded into the ceiling.

Like many historic buildings in Oxford and beyond, Magdalen College Library is not so much a frozen historical relic as an evolutionary combination of old and new. The current project is merely the latest chapter in the long, 550-year process of adaptation and renewal, of which Scott’s intervention was just one part.

The difference this time round is that a combination of proactive constructional solutions and sensitive remodelling should leave a legacy that provides modern, expanded accommodation for the library while restoring the historic integrity of its architectural form.