Bjarke Ingels has combined sustainability with recreation by topping a waste-to-energy plant in Copenhagen with a 490m artificial ski slope. Is fun the new buzzword of environmentalism? 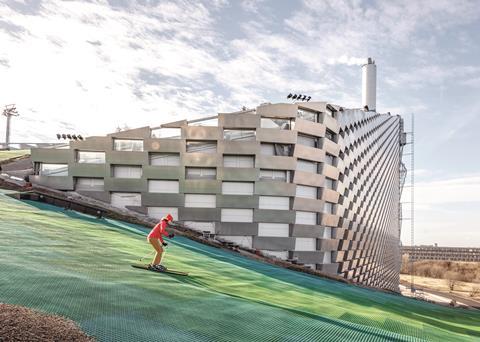 Sustainability is the zeitgeist of our age. It’s serious stuff all right but can it also be fun? According to Bjarke Ingels of architects Bjarke Ingels Group (BIG) the answer is a resounding yes.

And as if to prove it, his practice has just completed a milestone project that puts sustainability and recreation firmly centre stage.

Copenhill is a £490m waste-to-energy plant in the Amager district of Copenhagen, a post-industrial dockland neighbourhood on the south-east fringes of the city centre that is being extensively regenerated.

A waste-to-energy plant burns rubbish to create power and Copenhill aims to burn up to 400,000 tonnes of waste per year, producing enough electricity to power 60,000 homes and heat 160,000 homes. To put it simply, 3kg of household waste can provide up to five hours of domestic heating.

Copenhagen’s new 41,000m² facility is run by the Amager Resource Centre (ARC) and has been designed by BIG. It aims to be the cleanest waste-to-energy plant in the world, helping the city of Copenhagen achieve its goal of becoming the world’s first carbon-neutral city by 2025. 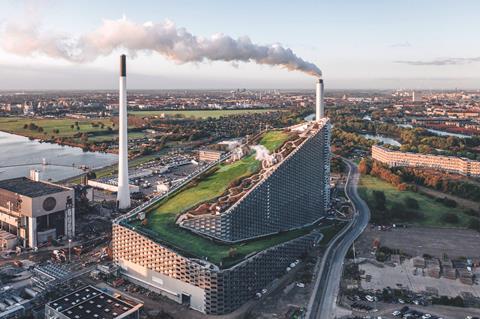 Improbably, (and this is where the fun part comes in) it is topped by a 490m artificial ski slope with a summit 85m high that also incorporates a bar, outside gym, Copenhagen’s highest public viewing platform, a landscaped hiking trail planted with 200 trees and a climbing wall covering 10,000m² – all open to the public at a cost of £25 per hour.

Copenhill’s Danish name is Amager Bakke with “bakke” being Danish for “hill”.

So why exactly does a power plant have a ski slope on it? “Why not?” asks Ingels when recalling his initial explanation of the project a full decade ago when his practice first won the commission.

“There are no mountains in Denmark” he explains. “We Danes have to travel six hours to the nearest Alpine-like skiing in Sweden. Plus, when we first came here a number of water-ski clubs had set up in the surrounding docks so it seemed cool to take that tradition and incorporate it into our building.”

But for Ingels, the gesture is more than just a recreational gimmick, it goes to the heart of what he believes is the evolving role of sustainability within society.

“The power plant already embodies the exploration of clean technology but we wanted it to also become a bedrock for the social and cultural life of the city. Sustainability can’t just be a battle for the environment, it has to increase the quality of life in order for it itself to be sustained. Hedonistic sustainability is the future.” 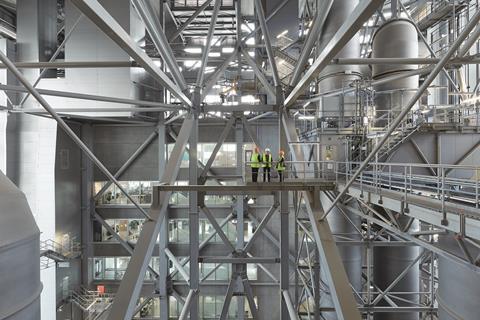 So how is this vision of hedonism achieved? The power plant is rectangular in plan but with two parallel diagonal roofs that form a continuous “dog-leg” slope from the roof of the building right down to ground level.

In doing so the architecture follows the “mountain” form that is a BIG favourite and is evident in much of Ingels’ work from 8 House in nearby Ørestad to his New York “courtscraper” at Via 57 West.

The power plant is entirely steel frame with only the roof formed by a series of sloping concrete slabs. Its exterior is clad in a continuous facade of 3.3m x 1.2m aluminium “bricks” stacked with alternating openings filled with either glazing or ventilation louvres.

At the start of the project, Ingels complained that most waste-to-energy plants were simply “big, ugly rectangular boxes” and the sloping form of his own “box” is clearly a departure from this. 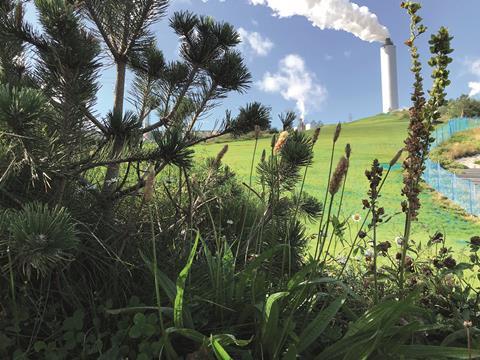 But while this departure in the form of a sloping roof may seem contrived to facilitate a ski slope, Ingels maintains that it is a direct response to the internal machinery requirements of a waste-to–energy plants.

Internally, the plant works by waste, delivered by lorries, being processed into a pit – Copenhill receives up to 300 such trucks a day.  The waste is then incinerated in giant combustion boilers where temperatures can reach more than 1,000°C.

The heat generated in the boilers provides power which can then be passed to a district heating system for heating and hot water for consumer use or can be converted into electricity.

In the 1970s almost 50% of Copenhagen waste ended up in landfill sites. Today it’s less than 2%. That’s in part thanks to installations like this

Ash from the boilers is then spray dried and cleaned to remove hazardous chemicals in giant tanks known as scrubbers. The ash can then be recycled and used for aggregate.

Steam from the scrubbers is usually emitted from a tall chimney; Copenhill’s reaches 125m high and, regrettably, an initial BIG idea to blow smoke rings through it in celebration of the building’s cultural role was abandoned when the vapour content required was deemed irreconcilable with the plant’s environmental aspirations.

The sequence of waste passing through the building is handled by objects that get progressively taller.

The initial processing pits are the shallowest, the boilers are significantly taller and the final scrubbers are taller still.Hence by having a building form that itself gets taller in order to accommodate this internal sequence, the ski-slope rooftop was born. 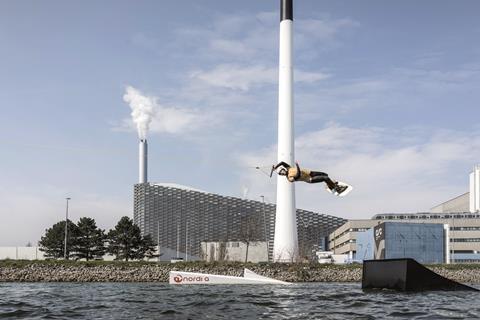 Certain measures, however, were taken to ensure that the ski slope and park could be accommodated above a building that remains highly hazardous and dangerous.

Due to the high temperatures and pressure levels reached in the boilers and scrubbers, the biggest risk to the structure of waste-to-energy plants is to have the roof quite literally pop off.

In order to ensure this does not happen, not only is the roof made of reinforced concrete slabs but a series of high-level water tanks are placed beneath it to cool the plant’s internal temperature and extinguish any fires that may emerge in an emergency situation.

While the plant has been in operation since 2017, it only officially opened to the public this month and has only been in full operation for a number of months.

A crippling series of delays and construction challenges hit the project, starting with what Jacob Simonsen, ARC director, refers to as “design issues relating to the main steam pipeline”.

Further problems followed with technical failures on the installation of the incinerator and problems with the flue gas cleaning system, all of which added significant cost to the budget.

There were also issues with the funding mechanism with the city of Copenhagen, which owns the ARC, effectively unwilling to spend public money on a private ski resort, requiring the formation of a separate venture to finance the recreational aspects of the project.

Though Simonsen admits that ARC is still in arbitration with previous contractors, he is sanguine about Copenhill’s difficult gestation.

“We’re trying to achieve something here that has never been accomplished before. Yes, there have been problems but the benefits are massive.

In the 1970s almost 50% of Copenhagen waste ended up in landfill sites. Today it’s less than 2%. That’s in part thanks to installations like this.

The recycling industry does its part but it can’t recycle everything. We take the stuff that can’t be recycled; as long as there’s waste you’re going to need waste-to-energy plants.” 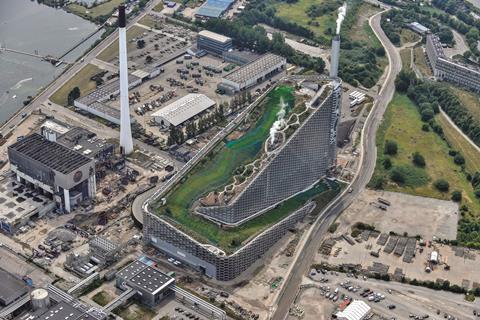 Copenhagen in fact offers one of Europe’s most established and integrated examples of waste-to-energy infrastructure. Copenhill is the largest of 22 such plants serving the city and surrounding region and it also benefits from a district heating system first established by five regional mayors in 1984.

Simonsen insists that having this district system for Copenhill to feed into from day one represented a “huge benefit and added immense value to the business case for Copenhill’s development”.

Waste-to-energy plants are not without their detractors and some argue that waste incineration is not a renewable source of energy and that burning waste itself produces toxic emissions which are present, even in small quantities, from the steam spewing out from Copenhill’s chimney.

And while a growing number of waste-to-energy plants are being built in the UK, some have proved problematic with construction hampered by a lack of sector expertise and the scale of risk being assumed by designers, contractor and operators.

It is also official Green Party policy not to support them due to the threat they represent to recycling.

Could the UK reap the benefits of schemes such as Copenhill even without the same level of district heating system infrastructure in place?

Simonsen believes it could and points to the growth in usage of renewable energy sources such as ground source heat pumps as that could be easily integrated into waste-to-energy systems.

And he is also sceptical about the level of toxicity in the burning process being sufficient to invalidate the plants’ environmental benefits saying that “the toxicity levels in Copenhill’s car park are greater than those present in the steam coming out of the chimney”.

Copenhill undoubtedly marks a big step forward for the energy-to-waste industry and it will further entrench both Copenhagen and Denmark’s reputation for pioneering environmental innovation.

But is also marks an ambitious attempt to give sustainability a more human and cultural face and embed it more firmly within the civic life of the city.

As Ingels puts it: “It provides a striking new urban landmark for Copenhagen and argues for a more pragmatic utopian future where environmental challenges can create the conditions for a livelier city.

”Architecture is there to give form to the future and I’m excited that my one-year-old son will grow up in a city where it’s taken for granted that you have a ski slope on top of a power plant.”