At Harris Academy Sutton, the UK’s first Passivhaus secondary school, the key consideration for designers was user comfort through a well-insulated, airtight structure. And that meant the contractor following the design to the letter.

Low-energy, sustainable public buildings are not a novel concept for the London borough of Sutton. The council built the iconic BedZed eco-village in 2002. A Passivhaus Plus primary school, which generates more energy than it uses, has just been completed in Hackbridge. And the novelty has not worn off: Sutton has now added the UK’s largest Passivhaus school – also the first Passivhaus secondary school – to its portfolio.

The Harris Academy Sutton, which opened in September this year, is the first building to be completed in the London Cancer Hub masterplan for the 4.8ha former Sutton hospital site. Sutton’s senior project manager Adam Whiteley says the council was keen to set the bar high for subsequent projects in terms of sustainability.

“The school is a gateway site, so it was crucial that it met the wider ambitions of the site, which we are regenerating in partnership with the Institute of Cancer Research,” he explains. 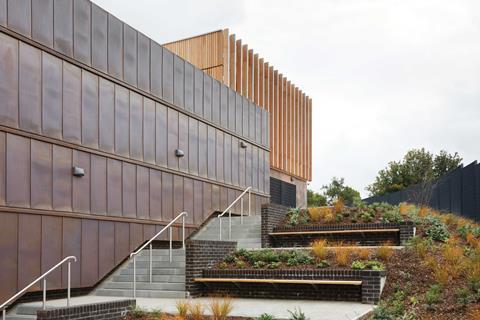 The building features concrete construction at the lower levels, with timber above

Sustainability was a key consideration: “The council has been ahead of the curve for some time in this regard, requiring buildings to achieve BREEAM excellent rating as a minimum,” says Whiteley. But pursuit of Passivhaus certification had the goal of delivering a much higher standard of building.

One criticism of BREEAM is that there is no guarantee the final building will perform as designed. The other is that BREEAM covers 10 categories, of which energy is only one. Passivhaus certification is not issued until a building is completed and occupied – and until the full paper-trail of evidence proving that the structure has been built exactly as designed, along with commissioning certificates, have been signed off by the Passivhaus Institute.

Although Passivhaus buildings offer significant long-term savings on operational costs – using about 80% less energy than equivalent buildings of traditional design – capital cost is generally up to 10% higher. The council knew it would need to justify additional costs for the £40m project. Some of this was met by the council itself, but after the brief was adjusted to create more generously sized assembly and sports halls that could be used out of hours by the local community, this enabled extra money to be leveraged from the Education & Skills Funding Agency (see box, below).

Government policy requires the funding and procurement of education facilities to be carried out by the Education & Skills Funding Agency (EFSA). Sutton’s senior project manager Adam Whiteley acknowledges that the provision of a Passivhaus school would have been unlikely via this route.

Under certain circumstances, however, local authorities can apply to procure schools directly – and here the urgent need to deliver new places worked in the council’s favour.

“We had to provide these school places in a certain timescale and we would not have been able to do so within the ESFA framework,” says Whiteley.

Timing was so critical that design of the building had to start even before the selection process for a school provider began, he recalls.

The architect Architype, a Passivhaus specialist, is one of the borough’s framework consultants and had just designed the Hackbridge primary school, so was appointed on this basis. Whiteley recalls that a decision was taken to use a two-stage procurement process to ensure a contractor was brought on board “earlier rather than later”. Willmott Dixon was selected from the approved London Construction Programme contractor list – and had recent experience in Passivhaus construction on the George Davies Centre for the University of Leicester.

Although you can build a Passivhaus out of any material, we do try to use those with a lower carbon footprint wherever possible

Architype associate Christian Dimbleby explains that the site dictated a building alignment that was not optimal: “Normally we would aim to orient the windows north-south, but here it had to be east-west because of the topography.”

Concrete construction is used for the ground slab and first floor, with a timber structure above, and timber cladding throughout. The main halls are differentiated by copper cladding, which is entirely recyclable. “Although you can build a Passivhaus out of any material, we do try to use those with a lower carbon footprint wherever possible,” says Dimbleby.

In this case, the concrete lower levels provided stability for the four-storey building, which runs to 10,625m² in total. The speed of construction with timber was another plus – the 715m² sports hall with its big CLT spans went up in just six weeks, he recalls. 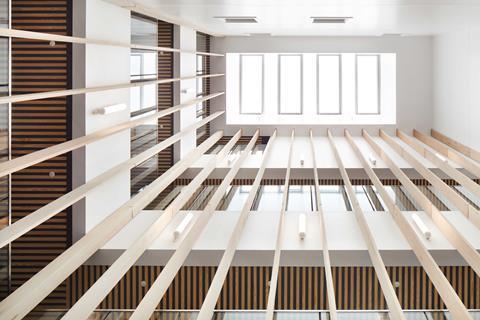 Classrooms and shared spaces lead off the central spine, and full-height light wells are used to bring natural light into the corridors. While savings in energy are the most frequently cited benefit of Passivhaus buildings, Dimbleby stresses that the key consideration for designers is user comfort – and this includes having ample natural light as well as a comfortable temperature and good air quality.

Currently only 450 pupils are being taught at the academy – numbers will increase each year to the full 1,275 students by 2023 – but the school’s principal James Fisher points out that even when you are in the corridor outside occupied classrooms, it’s hard to believe lessons are going on inside. 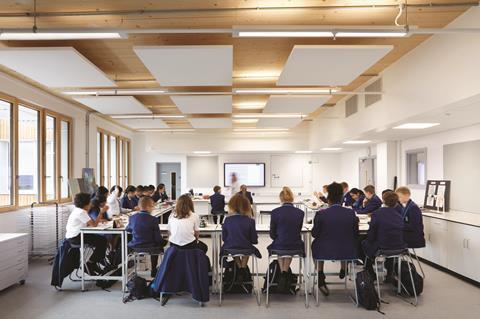 “There’s no need to have doors open to cool the classrooms, the walls aren’t thin, there’s a total lack of the ‘tinniness’ that you get in other buildings, and everyone has commented on how clean and fresh the air seems to be,” he says.

Pupils seem to respect their new buildings and this lends itself to an atmosphere that Fisher likens to academia. “For children moving to a new school, it can sometimes seem like an adventure playground,” he says. “But so far we’ve had no graffiti or other deliberate damage.”

With the Passivhaus design, no energy should be needed to heat the school building – the aim is that it be heated passively by the body heat of the school’s occupants, excess heat from kitchen and classroom appliances, and solar gain from the windows in the winter. Mechanical ventilation with heat recovery helps to retain heat within the building. In fact, radiators are provided in some classrooms for back-up in extreme conditions. In the summer, windows can be opened for ventilation if required, although occupants are encouraged to be guided by which light is illuminated on the wall panel – green or orange depending on temperature and CO2 levels in the room. With the classroom windows facing east and west, extra effort had to be put into design of solar shading to address early and late sunshine. About 10% of the school’s energy is provided by an array of photovoltaic panels on the roof, and the school can plug into a district heating scheme if one is established in the future.

Buildings designed to Passivhaus standard should have a primary energy demand of no more than 120kW/m²/year, but this proved impossible to achieve in Sutton. The school requires a lot of additional equipment that contributes to demand – not just IT, but specialist facilities in its 11 laboratories, a kiln and so on.

“We have gone slightly above the required level, to 133kW/m²/year,” reveals Dimbleby, “but we made sure to discuss this with the Passivhaus Institute in the early stages and get their approval.” 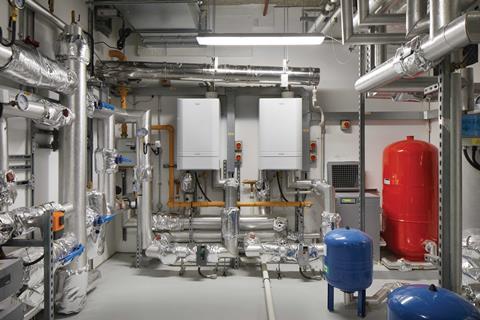 The school can be heated with a domestic-sized boiler despite being more than 70 times bigger than a four-bedroom house. One of the boilers here is a back-up

Sally Godber, director of the consultancy Warm, is Passivhaus certifier for the project and she sees Sutton as an exciting step on the learning curve of applying the model to non-domestic buildings. Lessons from the first Passivhaus primary schools drove subsequent improvements, but a secondary school is a different beast in terms of occupancy and energy demand. 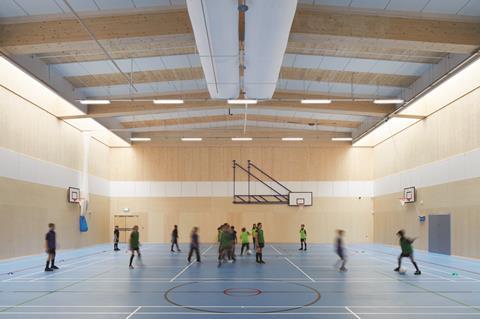 “Primary school classrooms tend to be occupied all day by the same number of children and they move from one place to another as a group,” she says. “But the use of rooms in secondary schools is very unpredictable – some of them stand empty for long periods of time and then are suddenly occupied, and it’s wasteful to continuously supply fresh air to them.

“Designing ventilation for this is complicated, and we still don’t quite know how to make it work. There is a lot of redundancy as the air-handling units are huge; this will be the focus for future improvements.”

Energy-hungry equipment is another bugbear in secondary schools, with the IT and catering burdens being particularly high. Such equipment, which affects internal temperature and energy use, must be discussed and specified early on, recommends Godber.

At Sutton, says Dimbleby, the team sourced energy-efficient equipment wherever possible – the kitchens in particular were difficult, with lots of induction elements and appliances such as hand dryers. He recalls having to reject the initial schedule of equipment as too energy-intensive.

Airtightness was the biggest challenge, particularly because the level required is so difficult to achieve, and the test isn’t carried out until the building is finished

Effective passive heating and user comfort can only be achieved with a well-insulated, highly airtight structure, and this relies on the contractor following the designer’s intentions to the letter. Careful oversight and quality control are therefore crucial.

Willmott Dixon project manager Graham Thompson says: “Airtightness was the biggest challenge, particularly because the level required is so difficult to achieve, and the test isn’t carried out until the building is finished.”

Passivhaus standards demand airtightness of less than 0.6 air changes per hour under both positive and negative pressure test conditions. At Sutton the team managed to halve this to just 0.3 – equivalent to 0.7m³/h/m². Thompson grins: “Usually we have to do two or three tests – you do the first one, then do some rectifications, then test again, but we managed to get it well within what was required.”

He puts this down to a number of early decisions intended to pre-empt any construction issues. The first was to relocate the airtightness line to the outside of the structure. “Typically in Passivhaus buildings it’s on the inside,” says Dimbleby, “which means there is a high risk that it may be punctured by follow-on activities and also it has to be wrapped around the floor slab.” 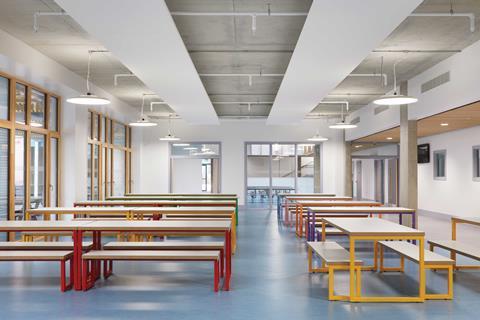 Classrooms and shared spaces lead off the central spine

With an external line, the risk of damage was much reduced as it could only be reached by those using access equipment. No wrapping was required, it was just rolled flat across the external structure.

Willmott Dixon appointed a full-time “quality champion” whose job was to ensure that workmanship on site met the required standards, and to check that the airtightness membrane was installed and joints finished properly before it was concealed behind layers of cladding.

“We already have a system for checking the quality of site work,” says Thompson, “but the key here was opening it up to be inspected, so others could see and confirm it. It requires a little bit more rigour.”

Educating the supply chain about Passivhaus principles and the importance of airtightness was also part of Thompson’s strategy, using training videos, posters and even the site hoarding to reinforce the message. In addition, he supported a “no blame” culture to ensure errors were corrected without delay. “Once you are engaged with the Passivhaus philosophy,” he says, “it does tend to come down the ladder to people like the site foreman and operatives.”