By putting a concern for neurodiversity at the heart of its design, the BBC’s headquarters in Wales has taken a radical approach. Other offices will need to follow its lead, Ike Ijeh reports 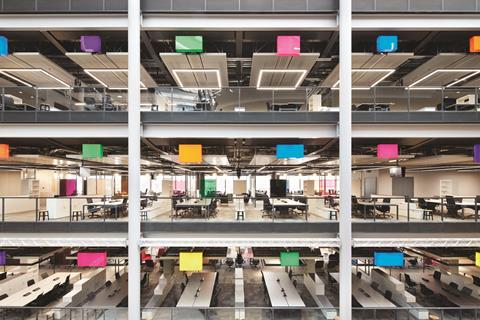 A total of 30% of workspaces are traditional sit-down desks

Mental health has, rightly, soared up our social agenda in recent years to become a key civic, cultural and professional concern. This has manifested itself in a variety of ways across society.

In education, there is significantly more awareness about issues to which young people may be particularly vulnerable. Great care is now taken over how mental health matters are portrayed in the media. And in construction, the healthcare sector has actively embraced design principles that are sensitive to debilitating conditions such as dementia and Alzheimer’s. The office sector has also taken a lead in this area, with wellbeing a standard workplace component, as demonstrated by buildings such as 22 Bishopsgate and the increasing popularity of wellness certification schemes.

Digital broadcasting studios and office headquarters for the BBC in Wales, built over five storeys on the site of the former central bus station. It has space for more than 1,000 workers and envisages about 50,000 visitors a year

Now a new variant of mental health design in workplaces is rapidly gaining traction. The term neurodiversity was coined in a 1999 honours thesis by autistic Australian sociologist Judy Singer. In the same way biodiversity refers to a wide range of biological and ecological conditions, neurodiversity postulates that humans are subject to a wide range of neurological conditions and that alleged mental “disorders” such as autism, dyslexia and ADHD are merely points along this spectrum.

Those who do not have these conditions are known as “neurotypical”, which means their brains by and large function as society would expect. Those that do are known as “neurodivergent” – the workplace Advisory, Conciliation and Arbitration Service (ACAS) estimates the term applies to more than 15% of the UK population.

Kay Sargent, director of workplace at HOK, describes those with neurodivergent tendencies thus: “It can be people with conditions including autism spectrum disorders, Tourette’s, ADHD, dyslexia. As we live and work longer, we have to deal with more people getting Parkinson’s in the workplace. Neurodivergents are people who are wired differently. They have incredible strengths and some challenges.”

For the first time, we have one of the biggest practical realisations of these requirements as they have been integrated into a new office building and broadcast studio in Wales

In a design sense, neurodiversity seeks to construct a workplace environment that meets those challenges. It has grown in influence and last year HOK released a major report on the issue. Designing a neurodiverse workplace identified certain principles and approaches required to deliver neurodiversity within offices.

For the past two decades, Jean Hewitt has been a leading practitioner of what she calls inclusive design, which advocates an approach that is fully cognisant of all neurodiversity requirements. Now, for the first time, we have one of the biggest practical realisations of these requirements as they have been integrated into a new office building and broadcast studio in Wales.

The five-storey, 26,000m² home of BBC Wales is located right in the centre of Cardiff on the site of the former bus station. It has been designed by Foster + Partners with Sheppard Robson’s interior design studio ID:SR responsible for the fit-out. Hewitt, who now works at Buro Happold, acted as inclusivity consultant.

Neurodiversity is an active policy issue in BBC offices across the UK and newer studios such as those at Salford have incorporated elements of neurodiverse design. The BBC also runs its own workplace neurodiversity initiative, which provides a cognitive accessibility toolkit that examines different elements of design for neurodiversity compliance. But the Cardiff centre is the first time these considerations have been embedded into a building brief from the start of the project. 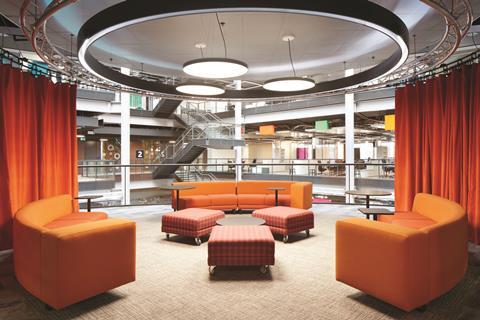 The Wales headquarters aims to create a 21st-century digital broadcasting environment and it contains workspaces for more than 1,000 people, radio and TV studios, as well as generous public access in a full-height atrium that is configured as a public street at its base. Crucially, every aspect, from floorplan to lighting, and even to carpet patterning, has been designed with neurodiversity considerations in mind.

So how do these considerations manifest themselves and how is the BBC Wales HQ different to an office that has not been designed with neurodiversity in mind? Alan Bainbridge, director of workplace at the BBC, sums up the building’s objectives neatly. “It’s about trying to support the widest range of people in the best way we can. So we wanted the building to be open, accessible and transparent. And crucially, we wanted it to be as intuitive as possible.”

The first evidence of this is the building’s floorplan. It is almost entirely open-plan with the atrium at its centre, from which the workings of each floor are fully visible beyond glazed balconies. “It’s all about views and transparency,” explains ID:SR lead designer Lara Ford. “Visually, the building is very vertically integrated and the atrium acts as a constant visually reassuring anchor wherever you are in the office.” 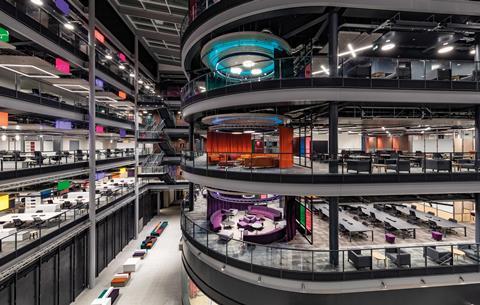 The atrium reveals another key neurodiversity device employed throughout the building: colour. Each floor is allocated a colour theme and large hanging colour blocks line the edge of the atrium on each level. “They act as landmarks,” Ford explains. “They help form an intuitive way of orientating yourself around the building and are very useful in wayfinding terms too.”

Accordingly, wayfinding is a huge neurodiversity concern and one to which the building takes a very graphic and illustrative approach. In the same way that a large department store or shopping centre may offer a simplified pictorial map of a floorplan by a stair or an escalator, so BBC HQ provides these at frequent points throughout the building.

The building is assisted by a simplified and colour-based tool which, like the London Underground map, prioritises stark visual clarity over geographical accuracy

But the map here is subtly embossed to provide tactile three-dimensionality and areas are depicted by bright colour boxes marked with coded legend symbols rather than text superimposed onto the graphics. In so doing, texts and graphics are kept separate and the potential challenge of navigating a large building – a source of frustration for neurotypical and neurodiverse employees alike – is assisted by a simplified and colour-based tool which, like the London Underground map, prioritises stark visual clarity over geographical accuracy.

Bainbridge has also been keen to secure what he calls “a variety of workspaces” to attend to a wide variety of neurological needs. So, while the floorplan is predominantly open-plan, only 30% of workspaces are at traditional fixed sit-down desks. The remainder range from high-stool bench workspaces to less formal upholstered seating in more relaxed areas. Power points are generously provided to facilitate this flexibility.

Multiple “quiet zones” have also been provided and a huge variety of meeting rooms are on offer. These range from acoustically separated single or group booths with soft upholstered surfaces to more formal frosted glass-fronted meeting rooms. “Open-plan can sometimes get bad press,” muses Bainbridge, “and we even had to have internal debates with some staff who were reluctant to move out of the private office set-up they had grown used to. But it is important to point out that that’s bad open-plan – good open-plan is about offering a choice of spaces, not a homogenous open floorplate.” 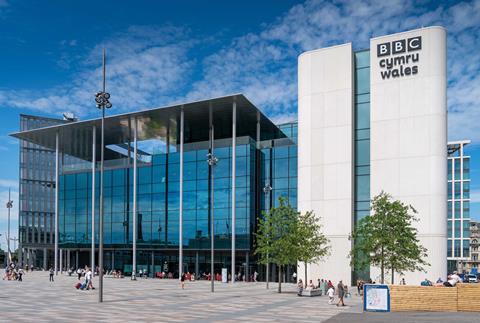 Lighting and acoustics are also important neurodiversity concerns. Ford reveals that many of the artificial lighting levels in the building are slightly below British Council for Offices standards to create a less harsh environment. Equally, fluorescent lighting, whose flickering can cause no end of consternation to many people, has been banned in favour of LED lighting. Acoustics are also constantly manipulated to support the function of the space in question and battens and panelling feature in the interiors.

Patterns are the final big area on which neurodiverse design has an impact. They are a potential minefield for neurodivergents and solid-black floor areas are generally avoided as those with extreme conditions have been known to refuse to walk over them in terror at the thought of falling into a hole. Yet, the open-plan nature of the floor means that patterning becomes hugely important in demarcating space. Carpets with an earthy-toned chequerboard stitch are used predominantly in office areas, with the stitch becoming slightly darker as it shifts from the circulation route to adjacent desk areas. It is a subtle change but hugely important, as it subconsciously delineates a navigation route through the building for those that might be visually or neurologically impaired.

Alan Bainbridge, director of workplace at the BBC

Bainbridge is keen to stress that in order to make neurodiversity work, there is another important non-design-related consideration: facilities management (FM). “The development aspect of a building is normally completely divorced from its management but with neurodiversity that is a risk you simply cannot take. You have to have a dedicated FM culture that knows the building inside out and is trained to spot when users are having problems with it. It cannot just be about colour and lighting – you need human input to ensure the building is doing what it is supposed to on a long-term basis.”

This is one of the reasons Bainbridge insists that incorporating neurodiversity does not lead to any increase in construction costs. “In the long run, I would even go as far as to say it’s cheaper,” he says. “Normally, you’d expect to be refitting an entire office building every five years. But here, because we’ve engaged with what users want and need from the start and implemented an FM structure that makes the building run more efficiently, you are not only increasing productivity but saving costs by extending the lifespan of the fit-out.”

This leads to the irresistible suspicion that neurodiversity might be little more than a new buzzword for an old adage we might be more familiar with: common sense. In the same way that climate change concerns may one day lead the electric car to just be called “the car”, might an ageing workforce with more working-age employees starting to exhibit conditions such as Alzheimer’s and dementia mean that one day neurodiversity is simply called “design”? If so, then in terms of the office of the future, the BBC Cardiff headquarters could become the rule rather than the exception.