A new teaching laboratory at Birmingham university takes a pioneering approach to design, applying a collaborative working ethos never before tried in a university setting 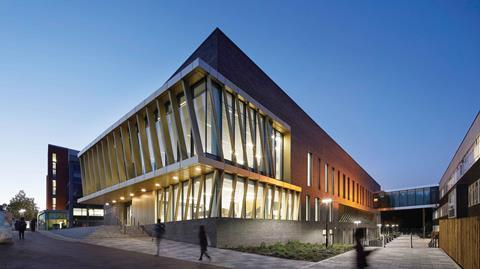 For some time now, collaborative working has been the radical new ethos around which the design of research laboratories has been based. Popular perception has scientists bent over a microscope in solitary study, probably in a lab buried deep within an architecturally anonymous building.

But the reality is very different: a new generation of state-of-the-art laboratories embrace physical transparency and social interactivity to actively foster a spirit of professional collaboration. Examples range from the Stirling prize-winning Sainsbury Laboratory in Cambridge to the gargantuan Francis Crick Institute in central London.

Until now the principle of scientific collaboration has been championed by the research rather than education side of science. The Collaborative Teaching Laboratory (CTL), a new £45m facility on the University of Birmingham’s Edgbaston campus, has changed that. Designed by laboratory veterans Sheppard Robson, it is located only yards from Aston Webb’s stellar university complex from the early 1900s but is a building that looks very much to the future. 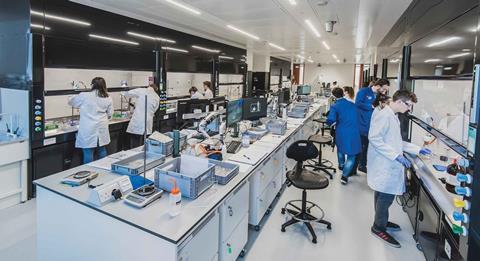 The building seeks to bring to academic laboratories the collaborative conventions now common in research institutions. The principle driver for this mandate is the creation within the new CTL of just three gigantic laboratories that provide shared facilities for a whole variety of science and research disciplines.

While the concept of shared facilities may not appear all that radical in non-science sectors – shared workplaces, for instance, have become commonplace – it does present practical and cultural challenges for scientific research within a university context, as Sheppard Robson associate partner Alex Smith explains.

“University science faculties are used to working in silos. Traditionally, disciplines like chemical engineering, earth sciences, biochemistry and geology conduct experiments separately in different labs within their own departments. But we wanted to turn this on its head. The question we asked was: why can’t we have a more collaborative and interdisciplinary approach?” 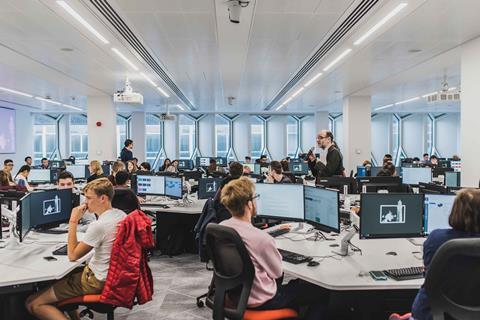 The answer comes in the form of the three giant labs that form the bulk of the new building. Rather than having multiple smaller labs specifically customised to specific scientific disciplines, the three labs form “hyperflexible” teaching environments that can be adapted to teach a wide variety of subjects and class sizes.

There is a dry lab on the lowest level, an e-lab on the middle level and a wet lab on the top floor. As the names suggest, the dry lab accommodates testing in areas such as electromagnetics and geology, the wet lab focuses on liquid chemicals and gases, and the e-lab is essentially a digital teaching space fitted with desks and screens.

Each lab is enormous and takes up almost the full extent of its respective floor. The dry lab seats 178 and the e-lab 200, while the wet lab seats 180 and also incorporates 50 double fume cupboards for the regulated control and extraction of the various toxic or flammable vapours, gases and aerosols used during the process of scientific experimentation. 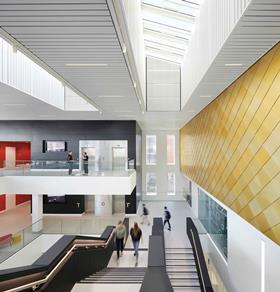 Despite their large capacity, the labs can each be compartmentalised into one, two or three sub-sections with separate entrances and independent audiovisual facilities, as required. The wet lab and dry lab are configured in bays centred on the building’s structural grid, and the wet lab can be subdivided into individual teaching bays of 20.

Architecturally, the building’s exterior directly expresses the internal triple-lab arrangement. The dry lab and e-lab on the lower two levels are encased in brick and enclosed by strips of parametrically modelled windows that are orientated to the south to provide controlled but optimum daylight levels. The location of the dry lab on the lowest level partially enclosed by the sloping ground level recognises that experimental conditions do not necessarily need large amounts of natural light.

But it is the wet lab at the highest level that is treated to the boldest architectural expression. Not only does its cantilevered rectilinear form appear dislodged from the rest of the building below like an extended drawer, but it is entirely clad in gold-coloured aluminium shingles that recall the metallic architectural theme recently established on the campus by buildings such as Lifschutz Davidson Sandilands’ nearby new library.

The three labs share back-of-house services, but while servicing arrangements are largely conventional for the dry lab and e-lab, the hazardous substances being tested in the wet lab ensure that this by far the most heavily serviced of the three. Therefore it is treated to its own interstitial plant floor directly above.

However, to reduce the plant load required by the wide array of scientific disciplines that the wet lab hosts, only three potentially hazardous substances are piped through the integrated building services: compressed air, nitrogen and natural gas. All other required chemicals and gases are kept in storage cabinets within the lab. 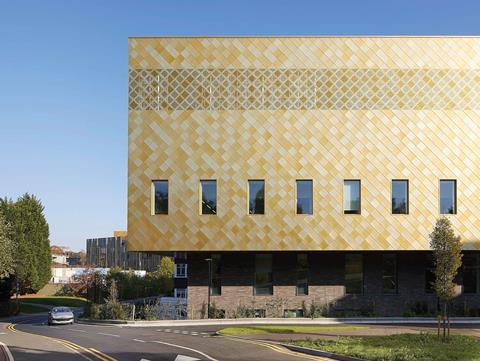 Achieving the building’s collaborative ethos is about much more than having three combined-discipline laboratories: it’s about transforming the entire functional methodology on which a traditional laboratory is based. Accordingly, the spaces around the labs are as important as the labs themselves.

For instance, there are centralised wet and dry prep spaces and wash rooms where students and teachers can prepare for experiments before entering the lab. In recognition of its heightened hazards, these facilities are most extensive for the wet lab where a “landside/airside” type system, similar to that deployed in an airport, is in place. It comes in the form of a locker, washbasins and changing room area that students and teachers must navigate before entering the lab.

An even more important key ancillary area is storage, as Smith explains: “Traditionally labs can have equipment lying around in storage for a whole semester before it’s required for a specific experiment. So when you’re combining the amount of disciplines a lab serves, the storage requirement becomes even greater. Therefore we spent a great deal of time studying patterns of usage and storage efficiency to find the best way in which we could make the storage and usage of equipment a much more efficient process.” 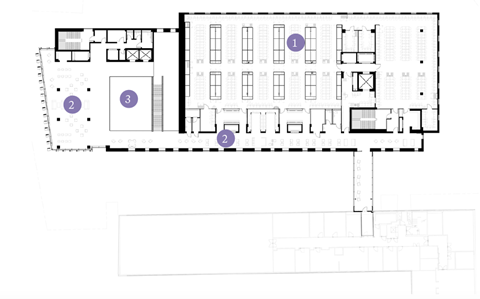 The results of this study are evident in three ways in the finished building. First, each lab has a significant amount of separate independent storage space in which to store the increased amount of equipment its interdisciplinary functions demands. Second, there is a comprehensive “timetabled storage” plan in place that precisely maps out when and where various pieces of equipment will be required across the semester and plans accordingly.

And third, the increased frequency of equipment changeover the labs’ interdisciplinary function requires means that technicians play a crucial role as they have much more to do than would be the case in a conventional lab. Accordingly, a technicians’ hub and office have been installed throughout the building and the storage areas beside each lab have been designed to maximise equipment access and maintenance.

“Storage is the part of the project that’s normally value-engineered out during the design and construction process,” Smith points out, “but here it was absolutely essential. Put simply, this lab wouldn’t function without its storage.” 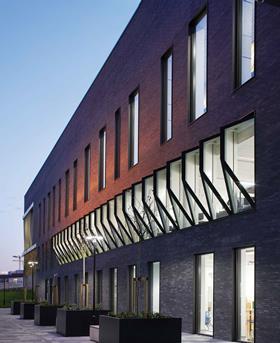 There is another also crucial element on which the success of the CTL’s multi-functionality model depends, which is the areas Smith describes as “social learning spaces”. While the design team is insistent on not referring to these as “corridors”, they can best be described as student access spaces that adjoin the labs and which are used for a combination of private or communal study or social interaction.

Accordingly, the spaces are broad and lined with an informal mix of desks and seating arranged either for private study or for group work. The e-lab’s social interaction space in particular exudes a strong external presence as it is expressed by dramatically inclined mullions that extend across its cantilvered first-floor windows.

As is the trend with all modern laboratories, Smith hopes that these spaces will foster the kind of “accidental encounters” or “spontaneous interaction” that will extend the collaborative ethos from the academic to the social realm. Time will tell whether this is the case. But what is already evident is that the combination of shared laboratories, intelligent storage and generous social spaces marks a genuine and radical attempt to extend into scientific education the collaborative ethos that has so transformed scientific research of late.