The awe-inspiring scale, ambition and innovation of the Francis Crick Institute more than matches the pioneering biomedical research that is soon to take place within its walls

There can’t be many buildings with air ducts large enough to comfortably accommodate a London double-decker bus, flues wide and long enough to house a convoy of transit vans, a construction budget where a quarter of funds were allocated to M&E services and an accommodation schedule where a third of the floor area is given over to plant space. But the vast new Francis Crick Institute in central London is one of them.

When it opens later this year, the gargantuan biomedical research facility will be the biggest in Europe and one of the largest of its kind anywhere in the world. Named after the celebrated scientist who in 1953 helped identify the structure of DNA, the centre will create a pioneering multi-disciplinary and collaborative hub that brings together world-leading experts in the fields of biology, chemistry and physics to help develop cures and treatments for human ailments and disease. 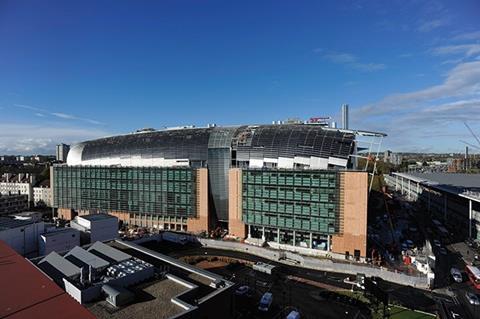 The Francis Crick will also represent a unique partnership between some of the UK’s leading scientific research institutions. This includes Cancer Research UK, the Medical Research Council, the Wellcome Trust, University College London and Imperial College London. With several of these organisations located nearby, the Crick aims to transform this busy corner of central London into one of the world’s most reputable biomedical research campuses. 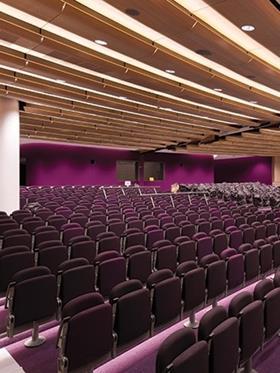 As one might expect, the statistics that accompany such lofty ambitions are astounding. The institute’s build cost was £435m, £120m of which was spent on M&E servicing alone. The building provides 84,000m² of space (roughly the size of Harrods, Europe’s biggest department store) of which 34% is plant space.

A measure of the sheer scale of the building’s service accommodation is its net to gross ratio of 50%, significantly lower than the 80% normally delivered in the commercial sector. Furthermore, when fully occupied the facility will be home to 1,500 research staff and provide almost 8,000ft² of hyper-specification bio-containment laboratory space as well as a 450-seat state-of-the-art auditorium.

Of the Crick’s 12 levels, four are located underground and have been excavated within a highly constrained central London site right next to St Pancras Station. The 16m basement is wrapped in a gigantic 20m deep and 1m thick reinforced concrete diaphragm wall that extends around the full 500m perimeter of the site. And such was the level of specification required on its laboratory that each floor took an average of five months to be fully fitted out. 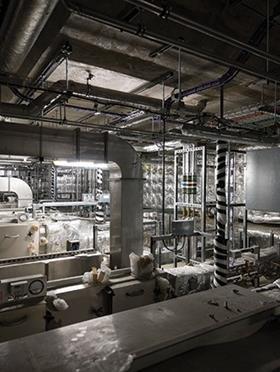 Delivering this mammoth project is architect HOK and main contractor Laing O’Rourke. The build has been divided into a series of critical packages which have been delivered by Laing O’Rourke via a two-stage lump sum contract. As might be expected from such a large and complex project, Laing O’Rourke has deployed its significant experience of off-site manufacture and modular systems to deliver a building with a considerable amount of prefabricated elements.

The building itself occupies a large rectangular and heavily landlocked site to the west of St Pancras Station and to the north of the British Library. The remaining two sides are hemmed in by large social housing estates. Furthermore, the area underneath the site is dissected by two tube lines that run close by and a labyrinth of service utilities, including a low-pressure 120-year-old gas main. All these considerations formed significant planning and structural constraints during the design and construction phases.

The building comprises two elongated terracotta-clad blocks separated by a cavernous atrium that acts as the spine of the building. At 130m long, 8m wide and stretching eight storeys high, the vast atrium has the scale and bearing of a medieval cathedral nave.

A second smaller cross atrium spans the centre of the building giving it a cruciform overall plan. The building is largely based on a 9m x 6.2m structural grid and is built from an in-situ concrete frame. It incorporates pre-cast concrete floors and in-situ concrete columns to minimise vibration in key laboratory areas.

Once the site had been cleared, the first phase of construction involved building the enormous 20m-deep perimeter diaphragm wall that enwraps the basement. This was built to facilitate excavation of the four basement levels and it was part of an intricate and highly complex construction strategy that strongly reflects the sensitivity of the local residential area. 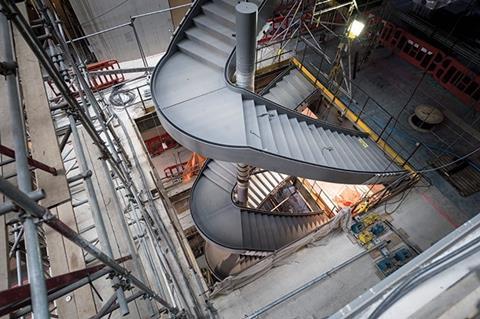 Once the wall was in place, the two uppermost basement levels were excavated to an approximate depth of 8.5m. From this level piles were then driven down using an innovative, highly sensitive piling technique that used fibre optic cables to measure the temperature and strain distribution of 260 piles. 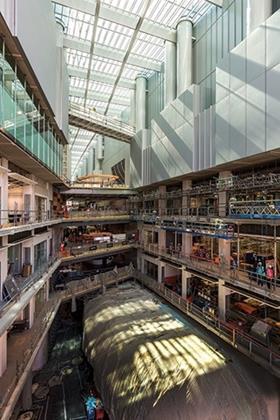 The substantial protection provided by the 1m thick diaphragm wall identified the basement as the ideal location for the most sensitive high-containment and biological research laboratories. Most conventional laboratories can only tolerate negligible levels of vibration transmitted through the building structure, but with the conditions required at the Crick, the vibration mitigation solutions became even more onerous.

However, the basement diaphragm wall presented the additional benefit of transforming what might have been the part of the building most susceptible to vibration (due to the proximity of the two local tube lines and the adjacent underground St Pancras domestic rail terminus) into its most stable area.

So the high-containment and biological research laboratories are located on the lowest two basement floors while the upper two are allocated as the interstitial plant levels whose considerable HVAC equipment and dedicated energy centre serve the subterranean laboratories. Moreover, by situating this heavy plant equipment in the basement, vibration and structural loading impacts on the remainder of the building are considerably reduced.

In fact, throughout the building, all vibration-generating mechanical, electrical and plumbing plant (MEP) is fully isolated from the overall building structure by a variety of hung, sprung or mounted support apparatus. Moreover, in some areas, such as imaging laboratories, further isolation is achieved by the use of local isolation tables mounted onto the concrete floor.

However, it is not just the design and structure of the basement that is affected by the Francis Crick’s huge service loads and vibration mitigation measures but its exterior and massing too. Laboratories throughout the building require a massive fresh air intake, approximately 430m³ per second. This is the equivalent of emptying a 50m Olympic-size swimming pool every 10 seconds, an extraordinary amount. 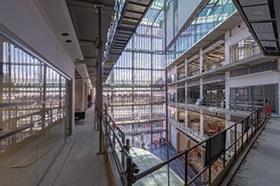 In order to feed this amount of air to basement laboratories and those located elsewhere in the facility, 34 enormous 19m high and 2m wide flues are situated throughout the building feeding and extracting air to and from the basement. This network is also complemented by gargantuan air ducts measuring up to 4m x 2.6m. In order to accommodate this apparatus, service voids between floors are an incredible 1.7m high, very nearly a full additional floor in themselves.

This remarkable network of horizontal and vertical service ducts, flues and risers eventually snakes its way up through the building to air handling units located onto two rooftop plant floors. This rooftop plant also contains heating and cooling units.

This is all concealed within a curved, barrel-vaulted glazed roof that also accommodates the 1,700m² of photovoltaic cells. Therefore the inherent service distribution and requirements of the building inform its architectural massing too and create a roof which recalls the profile of St Pancras’s famous vaulted train shed next door.

Prefabrication and modularisation has also played an enormous role in the construction of Francis Crick, particularly within the MEP system. Eighty per cent of the MEP has been pre-assembled with over 4,000 individual prefabricated MEP modules including elements like pipework, ductwork and valves. For a building of this scale and complexity, the design team maintain that this level of prefabrication was essential to ensure co-ordination, accuracy and efficiency.

Another innovation included the deployment of non-ferrous materials in sensitive and contained basement laboratory areas. High-tech imaging and scanning equipment such as MRI scanners are highly sensitive and must be kept away from all magnetic sources in order to function properly.

By using precast concrete plunge columns with stainless steel reinforcement the magnetic field in the laboratory imaging suites is considerably reduced. The size of these columns is also impressive, at 14m long and weighing 15 tonnes they are the largest columns of their kind ever manufactured off-site.

The record-breaking ingenuity of these columns perfectly symbolises the pioneering design and constructional approach adopted throughout the Francis Crick Institute. 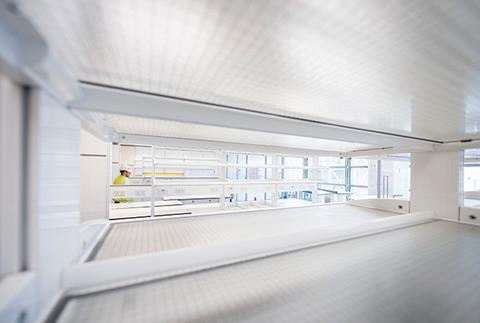 Plant voids between each floor are 1.7m height

The cathedral-like atrium is 130m long and extends the full height of the building. The outer shell of the auditorium is visible at the bottom

Plant voids between each floor are 1.7m height