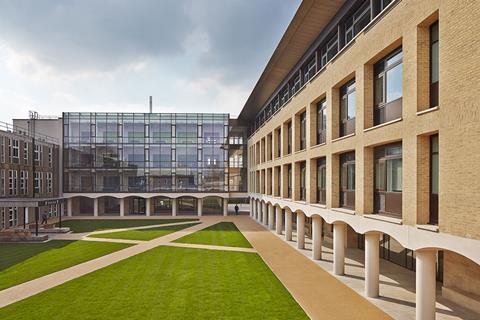 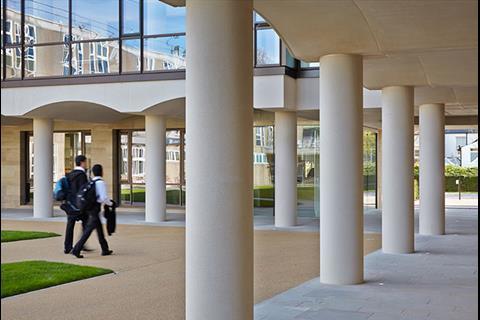 Architectural standards were slipping at the 500-year-old St Paul’s School in London, but the elegant exposed interiors and concrete colonnades of Nicholas Hare’s new science building augur well for the future

Since its foundation in 1509, St Paul’s School in London has existed in many different buildings on several different sites. The original, in the precincts of the famous cathedral, was destroyed by the Great Fire of 1666. A later site, an imposing Waterhouse-designed building in Hammersmith, was evacuated during the Second World War and used by Field Marshall Montgomery, himself an old Pauline, as a base from which to plan D-Day.

It’s a rich history, but while the school remains one of Britain’s most prestigious, its current premises in Barnes are hardly its finest architectural moment. System-built on an old reservoir site in 1968, the buildings now look tired, and, even when new, the site had its problems. The reservoirs were filled with loose ground - reputedly from the excavation of the Victoria line - and this took such a long time to settle that sports matches could not be played on the fields until 1979.

So it was with a sense of history that Nicholas Hare Architects approached its commission to design replacements for the worn-out buildings and restore the school to something of its former glory.

“Having been accommodated in some grand buildings in the past, the school was looking for new premises with some substance and presence,” explains David Tompson, the project’s lead architect. “They required buildings that were not only fit for today’s teaching needs, but could also potentially last for centuries rather than just a few decades.”

The first new building on the site was completed this year. At a main contract price of £16.5m, it accommodates the school’s science departments and it had to be robust, says Tompson. “Robust in the sense that schools are a tough environment and the building has to cope with that, but also robust environmentally - so it is energy efficient, low maintenance, and able to remain so long-term.” 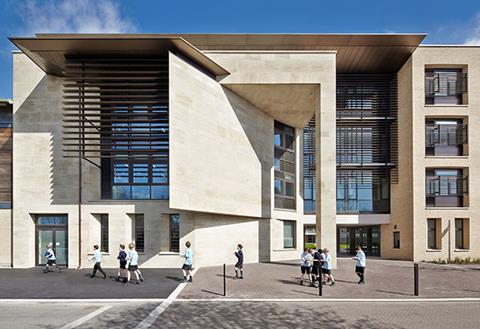 He adds that the extensive use of concrete throughout the building goes a long way to meeting these requirements. “We have an in-situ concrete frame, and concrete floor slabs which are largely left exposed. Obviously this helps to create a tough, hard-wearing environment that requires no painting. But it also allows the building to benefit from the concrete’s thermal mass.”

The use of concrete in this way is particularly appropriate for schools. Densely populated by day, hundreds of active bodies generate considerable heat. The mass of concrete absorbs this, keeping the school cool in summer and acting as a heat reservoir in winter. By helping to iron out both diurnal and seasonal temperature fluctuations, the concrete frame is fundamental to Hare’s plan to achieve a BREEAM rating of “excellent” for the overall redevelopment of the school.

The initial challenge for the construction team, however, was the rather basic one of establishing a firm base for the 18 new state-of-the-art teaching laboratories. Lee Hutchinson was the project manager for main contractor, Mace: “Our first issue involved the concrete filter beds of the old reservoir, situated 5m down and covered with made ground,” he says. “The solution was to sink rotary bored concrete piles 30m deep and cased for the first 9m.”

The columns for the in-situ concrete frame rise from these piles, which also provide the base for one of the building’s key architectural features: a colonnaded walkway comprising 20 structural precast concrete pillars topped with gently arching precast concrete roof vaults (see below).

Hutchinson says that, because the pillars of the colonnade are in a precise line, their placement had to be perfect: “The piles were very exactly positioned electronically, as is usual, but the bigger issue was that the reinforcement in the pile cap had to be just right for the precast columns. These had a hole in the base and had to fit perfectly onto the pile reinforcement. If they didn’t end up perfectly in a line, it would have looked very wrong.” 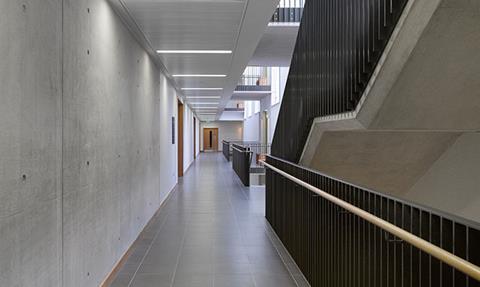 Mace’s attention to detail here has obviously paid off: the precast columns are perfectly vertical and aligned, forming an elegant, cloister-style walkway around the new courtyard, and providing an understated nod to the school’s grand past.
Hutchinson explains that the columns of the colonnade are topped by immensely strong reinforced precast concrete lintels, which support the weight of a double-thickness brickwork facade to the floors above. The lintels, in turn, are positioned adjacent to the precast roof vaults of the colonnade (which are not in themselves structural) and these connect to the in-situ concrete slab of the first floor.

“It was challenging,” concedes Hutchinson. “The vaults had to be temporarily supported by falsework, and as some of them weighed as much as six tonnes, this had to be substantial, and also specially shaped so it could evenly support the weight of the curved vaults.”

Once the vaults were in position, insulation was placed above them, positioned around exposed reinforcement protruding from the vault tops. Hutchinson explains that the insulation was also specially shaped to fill the “dips” created by the slopes of the vaults below. “By filling in the dips, the insulation created a flat surface for an in-situ slab to be poured on top,” he says. This minimised the weight on the falsework during construction, and ensured the most efficient and cost-effective use of materials.

Pouring the slab on top of the precast vaults effectively glued them to the main in-situ frame and first-floor slab. Once this had been done, the supporting falsework below could be removed.

They required buildings that were not only fit for today’s teaching needs, but could also potentially last for centuries

It was a nerve-racking time for the contractor: “Once the temporary supporting falsework was in place, it hid the underside of the vaults from view,” says Hutchinson. “Naturally we took great care to get the joints of the vaults aligned and level, but until the slab above was cured and the falsework removed, we didn’t know what the final appearance below would be.”

Again, the efforts of Mace, and concrete contractor on site, Atlantic, have paid off and the neatly positioned vaults provide a cathedral-like shelter for those strolling the colonnaded walkway.

Inside, the teaching labs feature all the services you might expect, from gas for Bunsen burners to data cabling for interactive whiteboards. By any standards they are heavily serviced - but with so much plain exposed concrete around, the question of where the services are hidden naturally arises.

“All the conduit routes for small power, data, fire alarms etc - they are all cast into the concrete,” says Hutchinson. “Even the precast vaults have conduits cast in.”

To achieve this required close co-operation between M&E engineer Arup and the concrete contractor. As Hutchinson says, “M&E had to be designed early and coordinated with the design of the precast vaults and the slabs, so conduits could be cast in and reinforcement designed with the services channels in mind. It meant we were considering how light fittings would recess into the vaults, for example, during the piling stage.”

The result is that false floors and walls are largely absent, allowing the thermal mass of the concrete to do its work unfettered by the insulating effect of plasterboard or ceiling tiles. It also means that the frame, as Tompson puts it, remains “legible throughout the building”.

And it seems somehow appropriate that a science block should function in this way. Students simply have to look up from their desks to see not only how the building is supported, but also how it kept at a comfortable temperature with the minimum of powered heat or ventilation. Pure physics.

With so much exposed concrete both internally and externally, the finished appearance of the material at St Paul’s was all-important. Mace project manager Lee Hutchinson says: “A huge amount of effort went in to making sure the concrete achieved a consistent colour and smooth finish. The concrete contractor, Atlantic, constructed a dozen sample panels and tried several suppliers before arriving at just the right mix.”

The original ambition was for a mix containing around two-thirds ground granulated blast-furnace slag (GGBS) cement replacement, but this proved impracticable. Hutchinson says: “That high a GGBS proportion results in a longer curing time, which would have affected our programme, so in the end the mix was 35% GGBS. It also contained limestone and limestone filler to achieve the creamy colour.”

Although a self-compacting concrete is often used to reduce voids where a high-quality finish is required, here a “halfway house” was chosen between standard and self-compacting - a high-slump, highly workable mix with 10 and 20mm aggregate vibrated carefully to remove voids.

Extra care was taken over the timber formwork, with joints aligning, board patterns regularised, no visible nail marks, and tie holes regular distances apart. “So when it’s struck it looks like there’s been a thought process behind it,” adds Hutchinson.

Despite the quality of finish required, and a number of repeating floor and column forms, timber formwork was used throughout. “Steel or plastic can give a shiny finish, but the design called for matt, which is best achieved with timber.” Fresh timber was used for all forms as re-use could have affected the finish.

Particularly neat carpentry was required for the internal staircases which, unusually, were built in situ: “They comprise quite long flights,” says Hutchinson, “and if they had been precast, the weight would have exceeded the limits of the crane. Even the rebates for the step nosings were cast in, allowing an aluminium strip to be fitted.” 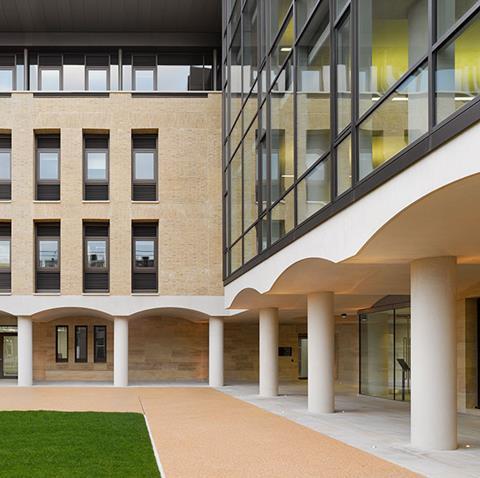 How the walkway works

The external aesthetics of the science building at St Paul’s School derive in large part from the combination of high-quality materials used. These include British sandstone cladding, York paving slabs, extensive brickwork, bronze anodised aluminium windows and, of course, precast concrete, particularly in the colonnade.

Architect David Tompson explains: “These elements were precast because of the large number of repeats and the consistency of finish that can be achieved in factory conditions.”

Each of the 600mm-diameter colonnade columns is 3.1m high and weighs 2.23 tonnes. The lintels, spanning 4m between columns weigh nearly four tonnes each, and a typical precast vault, also spanning 4m and 125mm thick, weighs 3.75 tonnes. These varied in size, however, with some larger vaults specified for certain areas weighing in at a hefty six tonnes.

“The mix for the precast elements gives a light, creamy colour,” says Tompson, “but it includes a dark micacious aggregate, which when acid-etched gives a slight speckle and texture to the surface. We achieved some visible differential between the elements by specifying a deep acid etch to cills and copings, and a standard acid etch to the columns, vaults and lintels.” 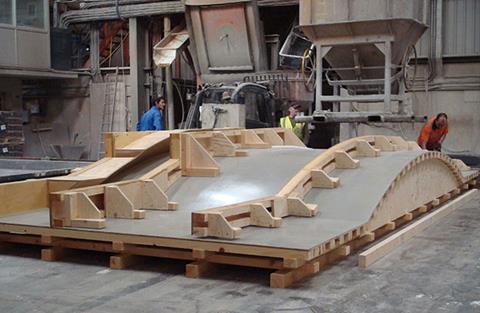