Take some well-tested modern manufacturing techniques, add them to a radical streamlined procurement route that makes the supplier king and you have the beginnings of what could be a revolution in how we build. Ike Ijeh reports on the latest advances in off-site manufacture 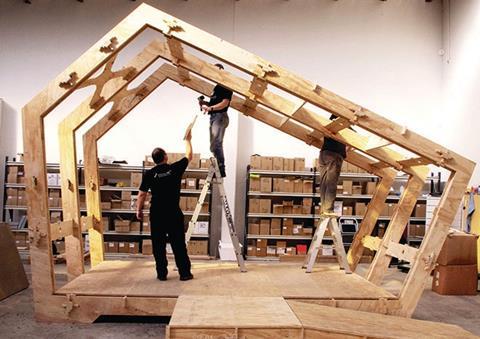 Imagine a construction industry supply chain where the role of main contractor has been made redundant and the manufacturers and suppliers are the dominant forces in the delivery of
buildings. Furthermore, imagine a world where off-site construction methodology has disrupted the traditional construction industry to such an extent that creating buildings becomes a function of logistics rather than construction, and architecture could literally be delivered by DHL.

Such a scenario may seem fanciful now but it is a vision being considered and pursued by certain players within the construction industry today, including Bryden Wood, a design and operations consultancy that employs a whole range of multidisciplinary professionals ranging from architects and engineers to system analysts and technologists, and open-source construction project WikiHouse. Off-site has long been hailed as the future of the building industry. On paper this seems to make sense. It offers attractive economies of scale that provide greater certainty, accuracy and efficiency as well as lower construction costs. 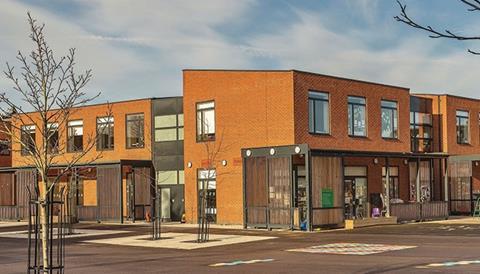 Equally, its focus on new factory assembly methods works well with the chronic skills shortage that has beset the industry for years. In addition, the government has been actively calling for a significant increase in off-site construction with last year’s Modernise or Die review from Mark Farmer identifying it as the most efficient means of delivering the volume building required to address the country’s housing crisis and renew its schools stock.

The construction industry has responded with scores of initiatives, with companies like Laing O’Rourke, Legal & General and Berkeley Homes making significant investment in off-site manufacture. In one way or another, off-site manufacture has been hailed as the “next big thing” for the past 30 years and as yet, none of the current initiatives have had the impact on national building stock that has been promised. And of course, for many off-site construction is still blighted by the social stigma attached to the poor quality of prefabricated housing from the 1960s.

According to Alastair Parvin, co-founder of WikiHouse, there is one clear reason why the current off-site approaches haven’t quite taken off in the way many have predicted. “Risk. They’re essentially based on an unsustainable economic model that requires a £50m factory to spend a huge amount of time sitting idle because the building industry is at the mercy of the boom and bust economic cycle.”

Central to Bryden Wood’s vision of the future is a fundamental overhaul in the way in which off-site construction works. It has devised a radical redesign of off-site construction methodology in order to get around this problem. The Infrastructure and Projects Authority (IPA) is the government body responsible for ensuring that major construction works across all government departments are carried out as efficiently as possible. Its recent annual report stated that up to 24% of major UK projects were “at risk of failure”. Against this backdrop, Bryden Wood has developed a strategic vision for how the construction industry could benefit by adopting a more manufacturing and component-based outlook and methodology based around a radical re-think of off-site construction capabilities.

“We envisage huge shifts ahead,” predicts Bryden Wood director and head of global systems Jamie Johnston. “Clients are becoming more and more frustrated with how everything in the construction industry is designed from scratch every single time and that the speed and efficiencies we see in other manufacturing industries aren’t present here.”

This draft strategy does not yet represent government policy but it proposes two main strategies. The first is to use off-site manufacture to develop common platforms for construction across all government departments. In this way, public buildings such as schools, prisons and hospitals could essentially be constructed from the same manufactured components and then customised for their specific function by the installation of the relevant required functional equipment and fixtures. The strategy would be similar to the way in which prefabricated mechanical plant is already installed into buildings of all types. Bryden Wood is already working on a roll-out of 16 off-site manufactured prisons for the Ministry of Justice on a restricted timescale, a project that could potentially form a template for the kind of departmental construction crossovers they propose

The second strategy would see the adoption of an “open source” approach to ensure that all customised components used in off-site manufacture conformed to the same parametric design and manufacturing standards and in order to make installation and assembly easier. Johnston concedes that this consistent “kit of parts” may result in some initial loss of intellectual property from certain manufacturers. But he cites the success of the collaboration that took place between various car manufacturers like Chrysler, General Motors and Ford in the 1970s and that led to the streamlined manufacturing techniques that define automation today as evidence of the huge benefits that could be accrued from rationalisation of this kind. But could this approach work for construction?

Changes to procurement are central to the realisation and implementation of these strategies. At present the traditional procurement route sees the client at the top of tiered system below which lies a project manager (probably), then architects and consultants, then the main contractor, then specialist subcontractors, who are supplied by manufacturers.

For Johnston, this exposes a very basic problem. “The repository of knowledge for how to use and assemble products is with the manufacturers and suppliers, but they’re at the bottom of the food chain and often only become involved at the very last moment.” 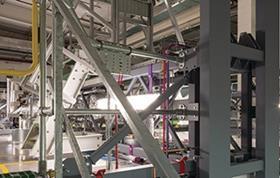 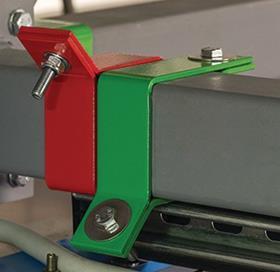 The GlaxoSmithKlein facility was assembled with colour-coded ‘Ikea-style’ components 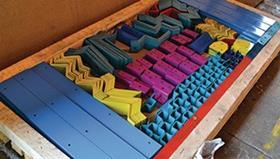 The GlaxoSmithKlein facility was assembled with colour-coded ‘Ikea-style’ components

So instead, the Bryden Wood’s strategy will see the current procurement route replaced by a simpler streamlined version within only two principle tiers rather than the current multi-facetted hierarchical system. Obviously the client will be retained at the top but they will be directly linked to suppliers and product manufacturers through a fully BIM-enabled “integrated design system” where the expertise of the manufacturers is embedded into “total construction intellectual property” right from the start of the project. The suppliers would produce systemised construction components which could be assembled quickly and with relative ease and could be easily tracked and categorised through a project BIM library and design guide. An early example of this process was demonstrated earlier this year with Bryden Wood’s construction of a pharmaceutical facility in Strood, Kent, for GlaxoSmithKline.

Built in just four weeks, the Factory In A Box is an Ikea-style system that relies on elements like colour-coded fixing connections and a hinged roof that pivots into place to avoid working at height, all of which is delivered to site in shipping containers. This simplicity is designed to reduce the skills threshold required for assembly, which in turn helps with the acute skills gap in UK construction. The Strood facility was built by a team of just eight unskilled workers.

For Johnston, developments such as these are essential to enable off-site construction to revolutionise the construction industry. “The problem with some off-site manufacturing is that too much is concentrated in the factory and not enough on site and procurement. Yes, construction can be complex but it’s also incredibly repetitive. If the intelligence can be digitised and embedded into the logistics planning and fixing components before the parts get to site, then we can build better and with a low-skilled workforce.

“Also, it’s clear that a more open book supply chain reduces cost and risk and increases productivity. We acknowledge that the construction industry is hopelessly fragmented. We also accept that no single initiative is big enough to sway the market by itself. But the benefit of a more manufacturing-focused marketplace is that when construction says it needs something from government, government is more likely to listen because it will see the same efficiencies and competencies present in industries like automotives and pharmaceuticals which generally have a far bigger political voice than we do.”

But what impact would this have this potential empowerment of suppliers have on main contractors? Would enabling buildings to be assembled by unskilled workers from easily accessible kits delivered directly from a factory make their role redundant? Not necessarily, muses Peter Caplehorn, deputy chief executive and policy director of the Construction Products Association. “It doesn’t have to mean the end of the main contractor. But we do envisage a future where you have more of a mix of delivery and procurement methods. Of course there will always be projects of a scale and complexity where a main contractor role will probably still be required. But there’s no doubt where there might be others where the use off-site construction means that the supply chain taking the lead would be a better fit.

It doesn’t have to mean the end of the main contractor. But we do envisage a future where you have more of a mix of delivery and procurement method

“In order for this to work, projects would have to be fully digitised from start to finish and manufacturers would have to ensure that assembly components are absolutely right. But if this was the case, then suppliers and the supply chain could definitely play a much bigger role, we don’t have to have a one route fits all procurement model.”

WikiHouse’s Parvin also sees BIM and digititisation as central to the expansion of off-site construction. His WikiHouse already enables users to download building plans from its website which can then be used to digitally manufacture plywood building components that can be CNC-router cut and then assembled to form a building, effectively eliminating the main contractor.

“Currently, the entire procurement process is based on trying to hedge massive levels of risk and introducing barriers to isolate the client from as much risk as possible. But digitisation of the distribution as well as fabrication process will increase certainty and reduce risk. This will need a massive paradigm shift in what we want and need the supply chain and procurement route to do.” 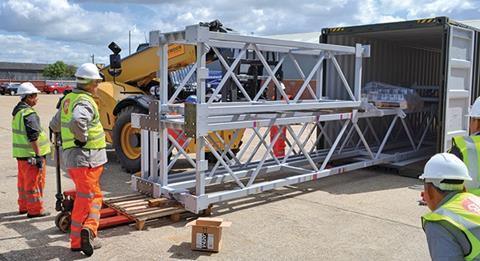 But not everybody shares the view that the main contractor’s role will be diminished. Keith Patrick is project director for Graham Construction and is an advocate for the opportunities that off-site construction holds. But for him, these do not extend to the extinction of the main contractor. “I think the proposition is unlikely as it would take an exceptionally radical shift by both clients and designers to bring their aspirations for their specific project into line with what the market can offer them re off-site. I do think however the industry will move further and further down the off-site road.

“There are forward thinking clients and designers in the market who ‘get’ it and I do not think traditional main contractors have anything to fear from off-site. Anything that increases the quality and surety of delivery therefore reduces overall project risk and protects the thin margins we all work for.”