The big lift: the 2012 Olympics aquatics centre gets a roof 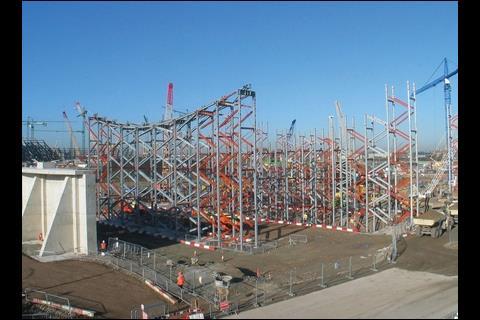 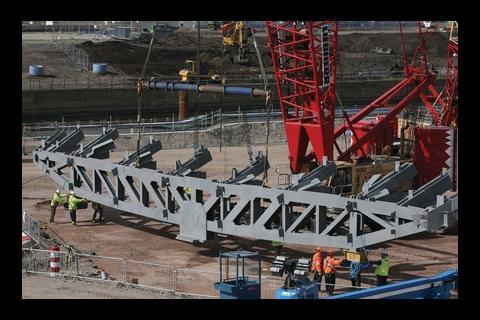 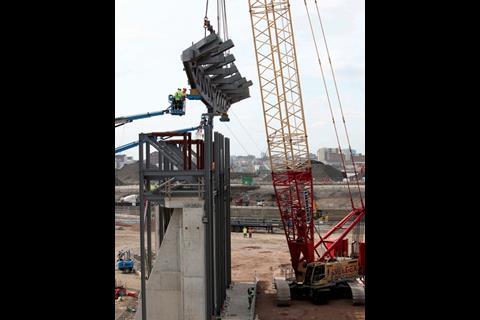 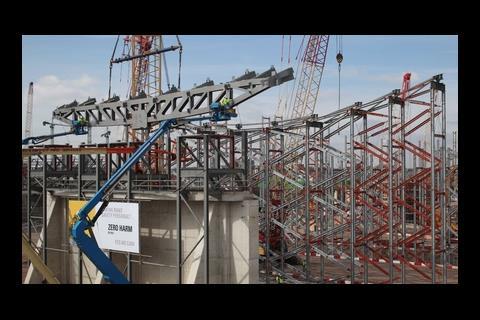 The Olympic aquatics centre is now being fitted with its lid. Thomas Lane found out how the structure is being assembled

This week the construction of the Olympic park shifted into a more exciting phase. Until now, most of the building work has been notable for scale rather than technical complexity, and mainly involved shifting mountains of earth. Even the most advanced building on the site, the main stadium, is not very exciting – it was designed for risk-free, simple and efficient construction, which meant studiously avoiding technical and architectural innovation.

This mundane stage is now over and the first structural elements of the aquatics centre’s roof are now being positioned. Designed by Zaha Hadid, this venue is probably the most exciting project on the park, despite the original design being shrunk to make it more practical and cut costs.

The pièce de résistance is its roof, which gives the building its visual identity. It sweeps upwards in a smooth curve from the south end and gently down again at the north, while the east and west sides flare upwards at each edge.

This dramatic shape provides challenges. The 11,000m2 roof structure spans 120m from a concrete wall at the south end to two concrete cores 54m apart at the north. It cantilevers 30m beyond this and two wings cantilever 27m on the sides. This freeform shape will be supported on just three points.

There will be 2,550 seats inside a permanent building and 15,000 in two temporary structures on the sides. To allow the spectators at the back of the temporary venues a clear view, the roof had to be higher in the middle than at the edges.

“We also needed a column-free space on the east and west sides of the building to allow the extra seats an unobstructed view of the events,” says Mike King, Arup’s structural engineer for the building. “Determining how to do this has been a challenge from the beginning.”

The construction process is not helped by site constraints. It is bordered by a railway line to the east, a canal to the west and the water polo site just to the north. Two large tunnels housing the high voltage cables that were originally carried by pylons pass underneath. Furthermore, no other work can be carried out while the roof is under construction.

The structural solution needed to be simple to make it easy to build. “Our strong message was to simplify the roof as much as possible for construction,” says King.

The main roof structure consists of long trusses shaped to follow the curves of the roof in the north–south direction. The upper roof surface sweeps up towards the centre and down again, but it is a different story below. The underside of the roof curves up to clear the diving pool at the south end, then down again in a wave before sweeping up even higher to clear the main competition pool.

Structurally this helps, as it mean the trusses are deeper at the central point of the roof than at the edges. “While it looks complex all the trusses are straightforward 2D elements,” says King.

When the roof is finished the support towers will be taken down. To simplify this, the whole roof will be lifted up 2m at the southern end

The trusses incline progressively outwards from the centre of the roof towards the edges like a fan. This supports the cantilevered wings at the sides as the trusses act like an inclined tied arch anchored by the support points.

Stuart Fraser, the project director for contractor Balfour Beatty, says he initially considered building the whole structure on the ground. “We looked at strand-jacking the entire roof up from the ground, but the curved shape meant you would have needed as many temporary supports for this as you would have to build it at height and it wouldn’t have been any safer,” he says. “Instead we’ve developed a method with minimal impact on the programme.”

That method involves building the roof in situ, a job that started on Tuesday. The roof elements are made from fabricated steel H-shaped sections by Rowecord Structural Engineering and the first elements were prefabricated in its factory. This included the first primary truss, which sits on the south wall and supports the fan trusses that span the entire length of the roof. The fan trusses will be built in sections and held up by temporary towers arranged in five rows between the south and north support nodes.

The first parts of the fan trusses are going in now and once this is completed the next section will start. The trusses will be assembled on site from the fabricated elements brought in from Rowecord then craned into position.

This construction method has two main benefits. The first is that is does not matter that the two concrete cores that support the northern end of the roof are not finished. “The cores at the north end have taken a long time to build because they sit on top of the power line tunnels. They need massive concrete transfer structures to deal with the loads on the tunnels,” says Fraser.

The idea is that the cores will be completed by the time the roof team reaches the north end of the building. The second benefit is that the first line of support towers can be taken down once the roof gets to the middle point. Crucially, this will allow Balfour Beatty to get on with the time-consuming job of excavating the diving pool at the southern end of the site before the whole roof is completed.

When the roof structure is finished at the beginning of August, the support towers will be taken down. To simplify this, the whole roof will be lifted up 2m at the southern end (it hinges on the cores to the north) so the towers can be taken out. The roof will then be dropped back so work can start on the Kalzip standing seam roofing. Services will be fitted inside the roof void and finally timber cladding will be fixed to the underside of the roof early next year.