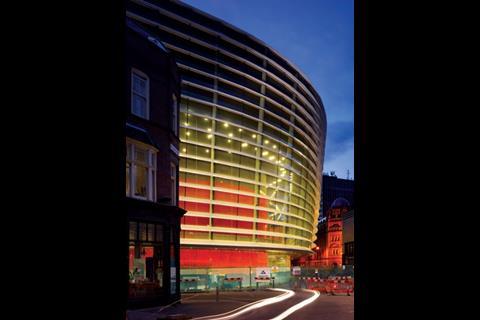 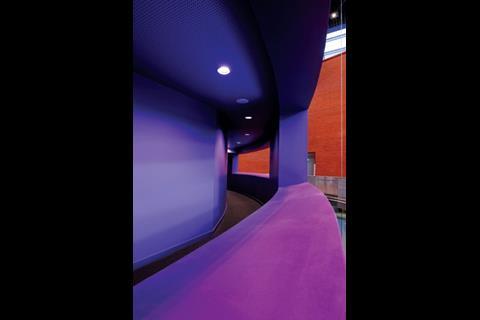 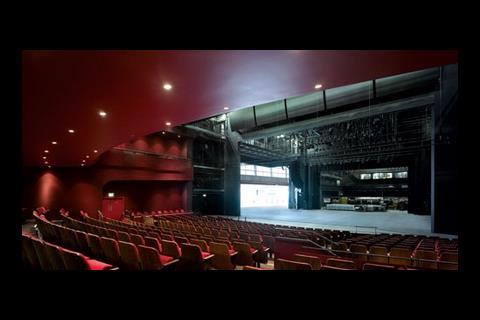 Large shutters separate the stage from this auditorium and a smaller one the other side. Shutters at the side of the stage allow the foyer to become part of the performance space, too 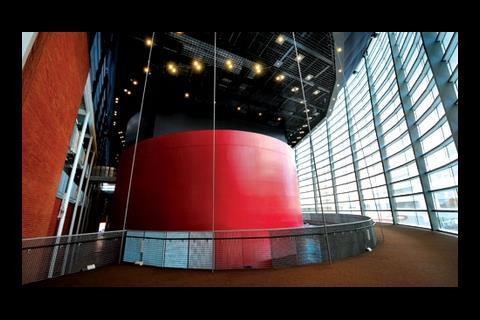 Rafael Viñoly’s UK projects have been derided and delayed, but finally, with the Curve in Leicester, he has got one done and dusted. Thomas Lane finds out whether this ‘inside-out’ theatre will answer the critics

Rafael Viñoly Architects has not had the happiest start in the UK. In fact, everything it has designed has been either delayed or slated by the critics. Work ground to a halt for 10 months on Viñoly’s visual arts centre in Colchester, jaws dropped when he proposed a giant plastic chimney as the centrepiece of the Battersea power station refurbishment and his other big UK project, the Walkie-Talkie skyscraper in the City, was variously described as “ugly” and a “child’s concept” and may never be built at all.

So it must be a considerable relief for Mr Viñoly that his first British building, the Curve in Leicester, has actually been finished. But how successful a finished article is it?

Like Viñoly’s other UK projects, the Curve can’t be accused of lacking ambition. It is a building that tries to redefine the way theatre is experienced by its audience. “The brief we gave to the architect was to create a theatre where more of the process was visible so audiences get an idea of what goes on behind the scenes,” says Graham Lister, project director for the Leicester Theatre Trust, adding that the building has been dubbed the “inside-out theatre”.

Approach the theatre and the first thing you see is its striking, curved facade, which defines the two public sides of the building, and lends it its name. This effect is heightened by the angling of the facade so the top overhangs the base.

But it’s the bottom 3m that is the most important. The whole thing is suspended from a massive roof structure so it is column-free at the base. This means pedestrians can get a clear unobstructed view into the building. The whole building has been designed so people outside can see the stage being set up, administrative staff working at their desks, even backdrops being painted in the workshop.

Get inside the building and it quickly becomes clear that this is a pure machine for performing theatre. The bare minimum has been spent on finishes; for example, the foyer floor is painted concrete, walls are simply painted and the brown carpet looks like it’s been nicked out of a seventies student flat.

But this doesn’t matter, because it’s all in the interest of making this the most cutting-edge performance space in the UK. The business end of the theatre has been conceived as a building within a building. The foyer wraps around two auditoriums housing 350 and 750 seats respectively with a stage sandwiched in the middle. It’s the interface between the auditoriums, the stage and the foyer that makes the building special. Each side of the stage features an enormous, L-shaped movable wall that can be hoisted vertically out of the way at the touch of a button. This enables those views from the street and also means the foyer can become part of the performance space.

Each auditorium is separated from the stage by more shutters. Carefully planned acoustic separation enables a rock band to play in the small auditorium while a second audience enjoys Shakespeare. It also means that the theatre can be configured as a huge, 1,100-seat auditorium with the stage at its centre or the main stage can be part of either auditorium.

Without the right sort of companies, it could have been a disaster

Despite the side shutters being the largest of their type ever built, each one can be raised in just three-and-a-half minutes and the shutters on either side of the stage drop in a mere 30 seconds. A mezzanine has been incorporated as part of the facade at first-floor level, which provides an area for interval drinks. Administrative offices overlook the foyer on the other side of the building.

No expense has been spared on this project. It is a highly technical building, and its stage area features the most advanced power flying system in the UK. It has highly sophisticated lighting and sound systems, seats in the small auditorium can be configured in different ways via hydraulic systems and there is a rehearsal space that exactly replicates the dimensions of the main stage.

None of this comes cheap. It cost £61.5m, far and beyond the original budget of £48.3m. Is this a case of another Viñoly building going over budget due to ferocious technical complexity? Apparently not. The facade was planned to be much simpler and cheaper and initially less equipment was going to be installed. Instead, a decision was taken to go for an expensive facade and a fully-equipped building because Leicester council managed to persuade key funders, including the Arts Council, to stump up the extra cash. “It’s about how you navigate difficult conversations to get buy-in to the project in its entirety,” explains Mike Candler, project director for client Leicester council.

The enhanced specification is the reason why the building has been handed over later than planned.

Has it been a challenging project to deliver? Martyn Woodhouse, project director for contractor Bovis Lend Lease, describes the project as “very difficult and complex” and had to put in place measures to ensure it stayed on track. “I was allowed to put together the team I wanted,” says Woodhouse.

Specialist contractors were engaged early, a Viñoly architect was permanently on site and the whole project team met regularly to tackle any problems that arose.

“Without the right sort of companies it could have been a disaster,” says Woodhouse. There were problems, for example, with the shutters, which caused deflections in the roof structure, as occurred with Viñoly’s Colchester project, but Woodhouse says that working closely allowed solutions to be quickly found. Challenging elements were modelled on computer, then tested in the field to check these would work on site.

The building opens to the public on 4 December. Assuming the careful preparation pays off, there is no doubt that the Curve is an exciting building that shows Viñoly can deliver, aided by a highly professional client and construction team. The challenge now is for writers and directors to find ways of making the most of this performance space, and Viñoly to achieve the same sort of accolades for his other UK projects.