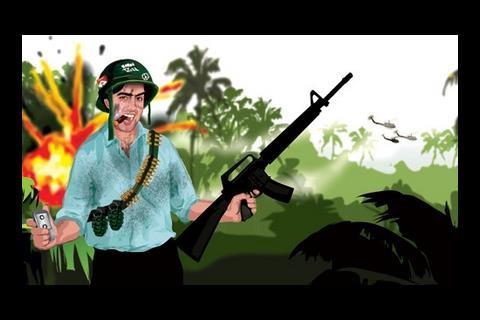 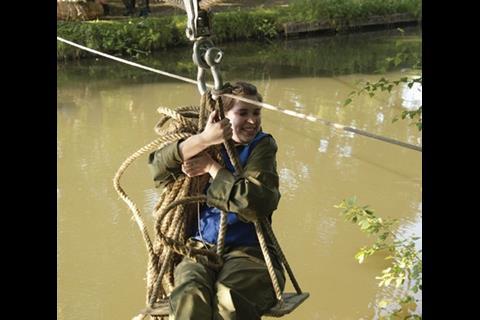 Armed with only enough rope to make a small hammock, Lili and Steve slip through enemy lines 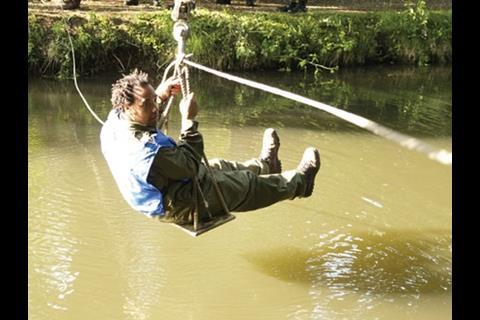 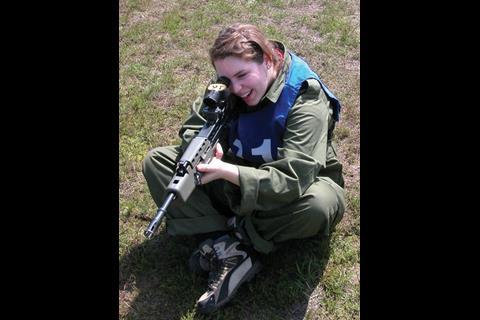 Lili laughs as she empties another clip into the fleeing rebels 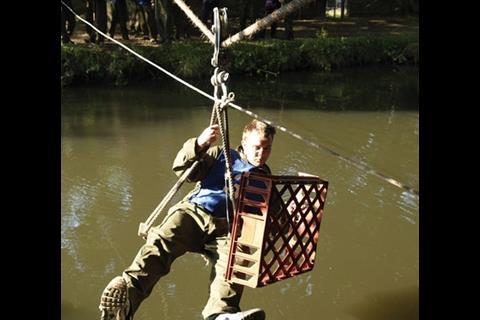 Henry’s turn to get the bread … 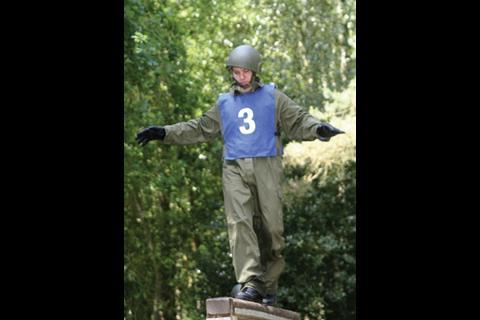 … and conduct a short mass 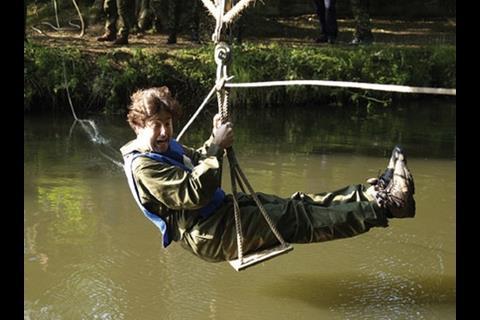 Deadly as a panther, silent as a cobra, Dan crosses the river 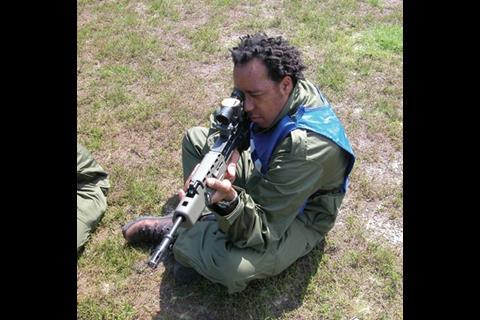 These days the Territorial Army isn’t so much about playing at soldiers as training them for actual combat. Still, it finds time to run ‘executive stretch’ weekends, where future managers find out a little about leadership. Dan Stewart joined a group from the construction industry for two days of fake blood and real guts

The sun is low in the sky as we creep through the undergrowth, rifles at the ready. Steve Murray motions for us to stop. The enemy is ahead. Following the plan, the artillery holds back as the forward flank manoeuvres into position. All is silence. A dry twig cracks under my foot. My blood freezes. Then all hell breaks loose. The forward flank starts its onslaught, and swirling smoke and the pop-pop of gunfire fills the evening air. It’s time for covering fire.

I switch my rifle to automatic, leap forward and hold down the trigger. Shells fly into the shrubbery. Someone from the forward flank runs back. Ceasefire! I ease my grip on the trigger. Silence again. Steve turns to me.

The Territorial Army was once known as the Weekend Warriors. From Monday to Friday, its gallant troops could be found in the nation’s workplaces, but on Saturday they would don combats, head to the woods and prepare for a war that would never come. Until it did. Since British forces were deployed to Afghanistan in October 2001, the TA has sent 16,000 soldiers into action there and in Iraq. More than 10% of the entire reservist forces have now done a “tour” in a war zone.

And yet, the old stereotype about the Weekend Warriors remains. In order to get employers thinking about the TA in terms of leadership and fortitude training, rather than just a bunch of obsessives who dress up as soldiers, the reserves have set up Exercise Executive Stretch. This weekend team-building event at Pirbright army training barracks in Surrey allows “civilians” to learn about the reservists. As construction and property are strong recruitment bases for the TA, lots of young industry types come to get a taste of military life.

Upon arrival on Friday evening, I am assigned to Group Alpha – aka, the A-Team

– alongside Lili Temple-Smith, a quantity surveyor from Gleeds, Steve Murray, a safety manager at specialist contractor Holloway White Allom, and Henry Dustan, a project manager at Mace. Another Holloway White Allom employee did last year’s Executive Stretch and, as we queue to stow our belongings, Steve is full of foreboding anecdotes.

“We’re going to be knackered,” he says, with relish. “Apparently, we have to climb an 8ft wall, and run through a burning house, and they wake us up in the middle of the night and make us do press-ups …”

Images of bellowing drill sergeants and bars of soap stuffed in socks fill my mind as I hand over my valuables. What am I letting myself in for?

We soon find out. After a full regimental dinner complete with brass band, we are ordered into a makeshift lecture theatre to receive a full briefing on the weekend’s fictional battle-lines. England is in the grip of a civil war. East Anglia has declared itself a republic (Anglia) and set up a front between Boston and Whitstable. We are civilians from the mother country (Litoria), preparing for the Anglian onslaught.

The commanding colonel tells us we will be battle-ready by the end of the weekend. “Well done for volunteering to join the Pirbright militia!” he barks. We are issued with ration packs containing powdered tea, boil-in-the-bag steak and what appears to be a tin of cat food. My heart sinks. We amble back to our temporary dorms. Sleep comes easily.

The first night is uninterrupted by midnight press-ups and the A-Team is up at seven hundred hours to take on its first task, Operation Towering Inferno. A Litorean professor is holed up in a burning house and we have to find him and get him out before our time runs out. The house is a nightmare of pitch-black rooms filled with gas heaters and wooden crossbeams to climb over. Entry is via a floor duct about 2 × 3 ft, which we must crawl through.

“I can’t do it,” says Lili, tearfully. “I’m claustrophobic. Somebody help me …”

Someone tries to open a window, only to be stopped by a commanding officer. “You can’t do that,” he says, gravely. “The enemy will spot us.”

“The enemy doesn’t exist,” says Steve, a note of panic in his voice. A distant burst of gunfire convinces us that’s not the case.

An interminable time later, we find the “professor” tied up in the attic. Part of our brief is to get him out safely. As soon as we untie him, he bolts.

“After him!” shouts someone. We run. The professor leads us down a hidden stairwell and runs into the yard, where he is promptly mown down by gunfire. He writhes about on the lawn, screaming at the top of his voice, pumping fake blood from within his shirt. The Pirbright militia, now transformed into a straggling band of terrified civilians, drags the wounded man to relative safety, behind a bin. It took us nearly 40 minutes. If this was a baptism of fire, we just got badly burned.

Next up is Operation Quantum Leap, where the team must construct a means of getting over a 7ft wall from three metal poles, a couple of planks and six lengths of rope. We are not allowed to touch the wall and we have just 20 minutes to complete the task. Mace man Henry is nominated as team leader.

The recruits are beginning to impress the regular soldiers. As we leave the minefield, one says of Lili: “She’s a QS? Really? You’re sure she’s not done this before?”

“You’re going to need all your project management skills for this one,” I say.

“We normally get to order materials in,” he replies ruefully.

Of course the challenge is virtually impossible. Although we weren’t to know it, the task is to see how the team deals with not being able to do it. That isn’t going to stop Henry though; after fashioning an extremely unstable-looking tripod next to the wall – quickly abandoned – the decision is made to have two team members hold up a plank from which other team members could jump over the wall. Steve looks pale. “That looks dangerous,” he gulps. You don’t need to be a safety manager to realise that.

Fortunately, our time runs out before anyone loses their life, and we have about four minutes to learn a valuable lesson about our limitations before being whisked off to the next exercise.

As we climb onto the truck, Steve Butcher, our drill sergeant, asks whether we’re having fun yet. Our “yes” is already half-hearted. He shakes his head. “Unbelievable. And you’re doing all the fun things!” he says. “We don’t get to do half this stuff on a normal TA weekend.”

As the day progresses, we learn orienteering, we hurtle around an assault course and we stage an ambush on an enemy. We are trained to shoot guns and, with the help of a forklift, load a fortnight’s worth of supplies on to a truck. We slowly improve. Throughout the day, the fiction that we are preparing for battle with the Anglians is sustained by the soldiers guiding us through our paces, although nobody is all that convinced.

As dusk settles above the woods, we prepare for a night under our bivouacs.

Mud-stained and exhausted, we are woken at midnight to conduct an orienteering exercise. Steve and I are woken again at 3am to stand sentry outside the camp for an hour. Chocolate keeps us awake and sane.

By Sunday morning, the A-Team is finally starting to resemble the crack unit it was named after. We devise a system of ropes and pullies to cross a river, carry two “casualties” on stretchers through a “minefield” of blow up tennis-ball-shaped lumps of plastic explosives, all without injuring, maiming or killing anyone. After our initial experience storming the towering inferno, this is an impressively accident free rate. The recruits are beginning to impress the regular soldiers, too. As we leave the minefield, I overhear a soldier say of Lili: “She’s a quantity surveyor? Really? You’re sure she’s not done this before?”

Then, all too soon, we are driven back to camp and the comfort of hot showers and clean clothes. There is an award ceremony for the best-performing teams but we are not really expecting to win anything after the towering inferno fiasco. To our bafflement, the commanding colonel announces we recorded the fastest time on the assault course. “It’s a fix. It’s either a sympathy vote,” whispers Steve, “or they thought they’d make sure the journalist wins something.”

On the train back to London, the A-Team assemble for a debrief on whether their professions helped them through the weekend. Lili, the youngest member of the group at 21, says she has learned new management skills. “I’ve never had a situation at work where I’ve led that many people, or people of such different skills and ages. It was daunting being told to lead a bunch of strangers, but I got used to it pretty quickly. It was much better than I expected.”

Steve, 38, is more circumspect. “It was brilliant, great fun, but I’m not sure how much it would apply to work. It’s more about personal development.”

Twenty-two-year-old Henry, though, has had the time of his life. “This is the best management exercise thing I’ve ever done,” he says. “It can help with leadership skills, but it also makes you realise the importance of obedience and listening to your superiors. I think Mace should send everyone on it.”

Sadly, that may not be possible. The actual cost of putting an employee through Executive Stretch is thousands of pounds, but companies pay only £200 per recruit, with the TA funding the rest. But government cuts to spending on the reserves mean the exercise won’t return for two years, if at all.

“I don’t see why companies shouldn’t pay the full price for it,” says Henry. Lili agrees: “City Challenge [a teambuilding event] costs £2,000 and Gleeds sends plenty of people on that. This is much better.”

Henry says the weekend would have inspired him to join the TA were he not expecting a baby. Lili says joining up would be attractive if she were older. At the moment, she feels her social life would get in the way of the 100 days a year the TA requires.

As the train pulls into Waterloo, Lili gives a tired smile. “Of course, though, it’s nothing like work,” she says. “If working life was like this, imagine how great it would be.”