This is a theatrical museum by Zaha Hadid that pays homage to Glasgow’s shipbuilding past. The Riverside Museum transport guides visitors at its entrance in the city through twisting and widening passages to its climax, the magnificent views over River Clyde. 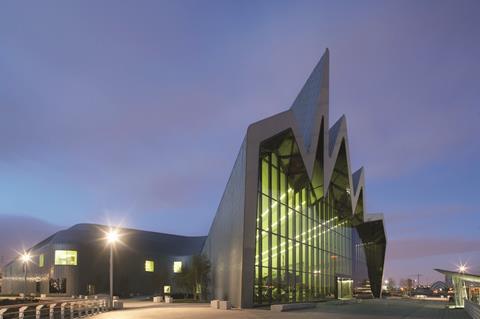 Without even knowing much about Glasgow’s history, upon first observing this building it is apparent it was built as a symbol for the heart of the city. The Riverside Museum, quite obviously built by Zaha Hadid architects, is a symbol to the ship building nature of the city. The Museum of transport is an elaborate metallic roofed structure which meanders and twists on the banks of the River Clyde.

However impressive and symbolic, I still believe, much like many of Hadid’s projects, that this structure fails to fit in context and stands alone as a unique museum on the landscape. The way in which the front and back facades stand similar to section cuts of the roofs, it appears to me that they look almost unfinished. The jagged look to me does not seem appropriate and appears too childish and ironically plain. For me this piece is far too abstract within the landscape.

The design is attractive, bold and modern, being defined as a response to the shipbuilding past that the area is known for, JamesFairweather

The Zaha Hadid design follows her distinctive style with the use of modern materials and a fluid form. The structure is defined by the front facade which responds to the Glasgow skyline. The expansive glass front with its spiked roof design is striking and when first viewed borderline ridiculous. However, the design has grown on me - finding out about how the roof is a response to the Glasgow skyline softens the impact and gives a purpose to the haphazard look.

The design is attractive, bold and modern, being defined as a response to the shipbuilding past that the area is known for and a design that evokes opinion from all those who view it.