Nothing moves as slowly as the law - a dispute dating from 1991 is back in court and the arguments haven’t moved on an inch. Unlike the costs

‘This case is of some antiquity,” began the judge. “You bet it is,” said the reader. Dear, oh dear, the writ was issued and served exactly 20 years ago.

The building contract in 1990 was for 19 industrial units in Berkshire. Lo, it followed a year later that the builder, Murray Construction, was deprived of completing the job. By then Murray was complaining about delay, loss and expense, extension of time, disruption and having been wrongfully booted off the job.

Murray held its hand out to the employer, Marino Family Trust, for damn near half a million. That claim was answered with a counterclaim from Marino blaming the builder for its own misfortune by virtue of a design-and-build contract. And, for good measure, Marino also blamed its architect for failure to administer the contract properly. That counterclaim amounted to £640,000 against builder and architect for damages and loss of rental income.

So, that sets the scene 20 years ago.

Marino, being the defendant on the claim, then sought an order by the court for “security for costs”. The court agreed and ordered Murray to pay £32,000 into court, largely because its finances were doubtful if eventually it lost the case and was ordered to pay the opponent’s costs.

Murray thought the order to be unfair and got leave to take the judge’s order to the Court of Appeal. And then Murray and Marino were overcome with fatigue and sleep. Actually, I suspect the reason why it all went quiet was because the judge indicated that the dispute would require a six-week trial, starting in early 1994. Six weeks of court time and solicitors and barristers is hugely expensive.

Murray thought the order to be unfair and got leave to take the judge’s order to the court of appeal. And then Murray and Marino were overcome with fatigue and sleep

The long sleep continued for more than 12 years. Meanwhile, Murray went out of business and was struck off the companies register. But in that 12 years there was one, at least, very miffed creditor of Murray - a Mr Desmond Schweppe. Seemingly he had funded a substantial portion of Murray’s legal fees against Marino and paid off creditors to Murray to keep the company out of receivership and fight for that £0.5m from the defendant. Then he, too, ran out of funds.

Eventually Mr Schweppe bought up the remains of Murray and recommenced the fight by bringing the company back onto the register. He came to the court all these years later to get the case back on the rails.

Marino reminded the court that the original order for £32,000 to be paid into the kitty hadn’t happened and then asked, unsurprisingly, for yet more “security for costs” cash for that kitty. A few weeks ago they all came to court to argue about this notion of security. Which, of course, is precisely where it all was 20 years ago. What is also being teed-up by Marino is an application to “strike out” Murray’s action entirely. By the time that move is made Marino’s legal costs will be £110,000. So it wants security for costs for that amount.

The basic principle for this securing of money for costs is that it can be shown that the claimant is a company and there is reason to believe that it will be unable to pay the defendant’s costs, if eventually ordered to do so. However, the court will not allow such an order to pay in funds to be an “instrument of oppression” to stifle the claimant’s claims. You might see how a delicate balancing of pros and cons has to be made.

A few weeks ago they all came to court to argue about this notion of security. Which is precisely where it all was 20 years ago

So, here we know that Murray has no money and it is likely that if its claims fail, its opponent will be knocking on the door of Murray’s empty bank account for legal expenses. Or it may well be that the reason it went out of business is that it was owed half a million for all the disruption and delay in 1990-1991. It may also be that Marino contracted with a very small builder to begin with and can’t complain later. In the event, the recent judge said he would require Murray to pay 70% of the likely costs of its opponent - another £45,000 on top of the £32,000.

And you might by now be asking: how come the fight continues after 20 years? The reason is that it has always been open to the defendant to apply for a strike out. As to the position now, the judge remarked: “After 20 years, the claimant will have an uphill task in defending an application [to strike out] so that these proceedings can continue.” 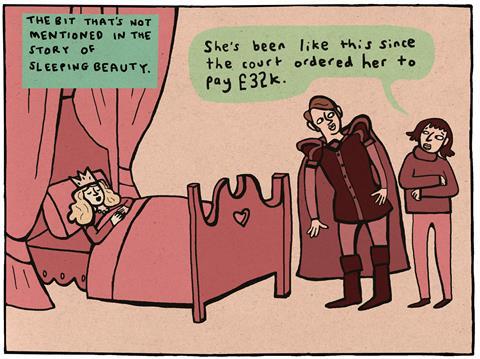