Adjudication: More than the final whistle

If an adjudicator fails to decide who owes who what money, you’ll still have to pay up for all the refereeing they’ve done

Well done PC Harrington. Well done because it had the courage to run a point in the High Court about adjudication that has been hanging around for the 13 years since it was invented. Harrington lost but it was a question worth asking. Let me tell you the story.

The adjudicator missed the underlying task to decide who owes who what money. That’s a big question running in his authority beyond the words on the notice

Wembley stadium contractor Multiplex sub-let reinforcement work to Harrington. The labour element became a sub-sub contract with Tyroddy Construction. Then Tyroddy and Harrington fell out. An adjudicator came onto the pitch. Modest, perhaps tiddler-size amounts of money were in dispute about Tyroddy’s retention release. Harrington opened its batting by informing the adjudicator he had no right to adjudicate because no dispute had arisen yet. Won’t do, said the adjudicator, and pressed on. Harrington then bowled up a defence, which said Tyroddy was overpaid on Wembley. In which case there was no claim for any money - and for good measure it counterclaimed for the so-called overpayment. So, said Harrington, Mr Adjudicator is obliged by this defence to decide the Tyroddy final account so as to fathom the alleged overpayment and any retention release and who pays what. Do you see how this adjudication has grown arms and legs? Tyroddy has simply asked for its retention in the formal notice of adjudication. But Harrington has exploded the affair into a strip down of the account. This was too much for the adjudicator. He said it was too far to say that his authority to decide retention release took him into this counterclaim. He was wrong. You can’t fathom one without the other. Harrington’s efforts to persuade the adjudicator to look at the sums due and paid and overpaid came to nought. So, his award didn’t take into account the counterclaim about over payment. Harrington said that was his mistake and no real adjudication had taken place. Mind you, it was always open to Harrington to run its own adjudication claiming overpayment. And if that proves to be the case the two separate awards can be conjoined for a net result. Be that as it may, the adjudicator had gone adrift by not bringing in the counterclaim and the court would not enforce.

That is just the beginning. The next bit “is interesting and important”, said the High Court judge. Given that the adjudication is ineffective and a waste of time, isn’t it fair to say that no adjudication was carried out and that the adjudicator has not earned his salt? That’s the point run by Harrington in court. It argued there was “a complete failure of consideration” by the adjudicator. It’s a phrase used in failed contracts when there has been a failure of performance for which the other party has bargained. Given the adjudicator is in contract with Harrington and Tyroddy and given the award was useless, hey-ho, no fees?

Given that the adjudicator is in contract and given the award was useless, hey-ho, no fees?

It is simply a mistake as to powers. An easy mistake; he thought it was stretching the adjudication too far, going where he ought not tread. He confined himself to what was said to be his task in the “Notice of Adjudication”. What he missed was that the underlying task was to decide who owes who what money. That’s a big question running in his authority behind the words on the face of the notice.

Harrington argued that there was a total failure of consideration by the adjudicator but that means complete failure. A contract “to adjudicate” contains a raft of services, or at least more than one. If some of the services have been provided there is no total failure. So, what is the bargained-for performance? Well, it’s a a lot more than “just” the end decision. Loads of time is spent reviewing the documentation, then response, then more besides; to say nothing of the quarrels that arise. The adjudicator is employed not merely to produce a decision; he is there to operate as best he can a statutory contract especially for commercial construction. All he has to do is his honest best. Moreover, it is long since recognised that mistakes are inevitable. So Harrington and Tyroddy got precisely what they bargained for. Part of the adjudicator’s performance was as per his contract. So, there can’t be a total failure of consideration. Not in this case at least. 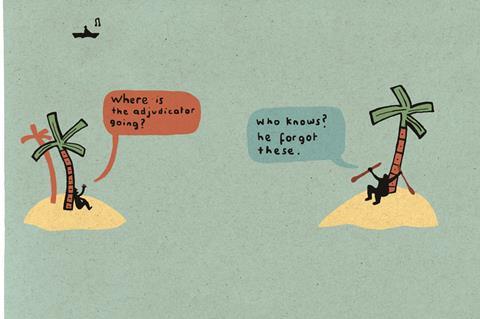