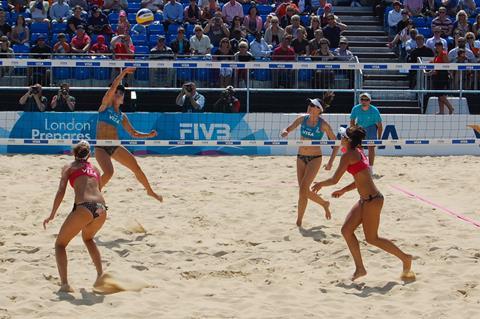 Watching scantily clad girls knock a ball around a giant sandpit yards from Downing Street a day after London went up in flames has more than a slightly surreal quality. Welcome to the world of beach volleyball which has more in common with a day on Brighton beach than the Olympic Games.

This is the test event for women’s beach volleyball which is being hosted on Horseguards Parade, just off the Mall. The temporary plastic seats, burger vans and sand covered courts look bizarre against the noble, classical architectural background.

It’s even harder to take this seriously when the contestants wear bikinis and dancing girls appear when the players leave the court for more than a few seconds. Loud music blares out at every opportunity and the irrepressible presenter fills in the few remaining gaps. It’s so noisy David Cameron asked them to turn the music down during the emergency Cobra meeting on the riots.

The game is very simple, contestants play on real sand with a net in the middle with strips of fabric used to demarcate the court boundary. While I am there China thrashes Greece, the Netherlands are beaten by Vanuatu and the Mexicans thrash the Chinese. By the time the Canadians get to play the Spanish the novelty has worn off and it’s time to go.

The test event is going well according to project manager Drivers Jonas Deloitte’s director Duncan Firth who has overseen the temporary venue works. “We’ve got everything that we wanted to get out of it, it’s just a matter of making a few tweaks for next year,” he says.

There is lots of preplanning and liaising with local stakeholders which includes Downing Street. Firth says Cameron is actually very supportive of the event and came down to see the venue being erected and had a go with a volleyball. “He was bouncing it around more like a basketball,” laughs Firth.

It took three weeks to put up the venue which includes five courts, seating for 1,500 people and 120 truckloads of Surrey’s best sand. This mustn’t be too fine so it blows away in the wind or too coarse so it injures the players.

Next year’s venue is bigger with seating for 15,000 people so will take six weeks to erect. Hopefully next year’s event will go ahead without the riots and the neighbours complaining about the noise.