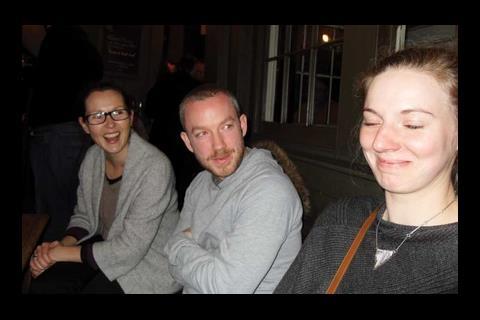 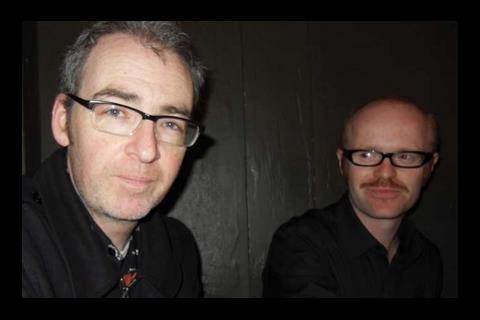 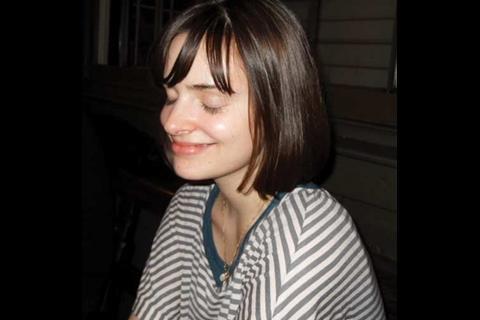 East are a busy lot. In December last year they landed the job of working out what should happen to the whole district of Farringdon over the next 25 years, including planting a Crossrail station in the Smithfield meat market area

And they’ve chosen a busy pub to meet in. The Jerusalem Tavern is a terrible warning of the dangers of future over-population: we end up compacted into a tiny yet amazingly noisy space, and every trip to the bar/loo/street is a nightmarish, slow-motion ballet of colliding and apologising. On the way back from the bar, good-natured regulars form a spontaneous bucket-chain, passing pints to their prospective owners.

One of the little awkwardnesses of doing a Buys a Pint is the taking of photographs – not a normal part of the pub-going repertoire. But not with East. They’re well into it, and there is much hilarity when Fran discovers that, with a bit of careful focusing and a steady hand, Dann’s amusingly distorted head can be made to appear floating in a pint of St Peter’s Golden Ale.

Leaving the others to their hilarious camera trickery, Julian and I strike up a rapport based on our common experience of scraggy bits of London. It turns out that he resided in my home borough of Charlton for 20 years. For those unfamiliar with SE7, it’s a rather ill-favoured collection of bricks and streets jammed up against the nastier bit of the Thames. Well, that’s my opinion; Julian likes these urban offcuts, partly because they offer so much scope for architectural improvement.

Michael then points out that I may have missed the glamour that the area has to offer: I never went to the (now long gone) Like It or Lump It pub, where Jude Law used to work as a barman. On the other hand, how good was it really? There may be a clue in the name …

Then there’s nearby Acton, where Julian used to hang out as a skate punk back in the seventies. This prompts a conversational segue into urban redevelopment. I recall that when Safeway was granted planning permission to build the borough’s first superstore, part of its section 106 agreement was to put in stone paving, iron benches and trees. The area then became a favourite gathering place for west London vagrants and street people, who settled in for a party that lasted for years. It also revived the local grocery stores, which replaced their usual tired custard creams with shelf after shelf of Diamond White cider and Tennant’s Super lager. And, Julian says, it provided a project for East when the firm became involved with the council and homeless charity St Mungo’s in creating a "drinking-free space” in the area.

At this point the conversation turns to crisis in the banking system and the downturn in the economy and I decide to brave the crowds for another drink.