City Inn vs Shepherd: Have you seen the contractor’s behind?

If a storm and a contractor both delay a project, is the contractor eligible for an extension? This ancient problem has just had another going over in the Scottish Court of Appeal

If you do not have enough time to read all 90 pages of the Scottish Court of Appeal’s judgment in City Inn vs Shepherd Construction (22 July 2010), do read the final six. They contain the plainest, most easy-to-understand explanation of JCT extension of time machinery. Oh, sure, it will draw controversy - what doesn’t? But I for one wouldn’t dream of saying whether the Scottish Court was right or wrong.

Professional advocates always start by exploring the extension rules in the contract. The rules are then explained jot by jot. Then comes the stumbling block: “You can’t award an extension of time for an employer delay when the contractor is in delay through his own fault, or might be.” Tish tosh, says the other advocate, and out trots all that magic dust about “dominant” causes, “operative” causes, “competing” causes, “concurrent delays”, “culpable delays”. Out come the textbooks, the learned papers and the cases (tons of them). And now, out will come those six pages from the Scottish Court of Appeal.

So let’s see what it said. The machinery starts when the contractor flags up a delay. The architect then has to decide whether that delay is on the JCT’s list of “relevant events” - those circumstances in which a contractor is prevented from undertaking work and can therefore claim for extra time allowance. Then the architect has to decide whether the completion date in the contract is likely to be delayed by that relevant event; and then estimate a fair and reasonable extension.

Of all that, Lord Carloway said: “This does not, at least strictly, involve any analysis of competing causes of delay or an assessment of how far other events have, or might have, caused delay beyond the completion date. It proceeds to a large extent upon a hypothetical assumption that the contract has proceeded, and will proceed, without contractor default. It involves an assessment … of the delay that would have been caused to the completion date purely as a result of the relevant event.”

He then gave a well known example. “In the oft quoted context of exceptionally bad weather, if such weather occurs and would have been likely to, or did, delay the works beyond the completion date, the contractor would expect an extension of time …” He then added: “It is of no moment that there was a contractor default before, during or after the weather conditions … What the architect is tasked to do is to look at what the contract required within the timeframe permitted [in JCT] and to allow the contractor such additional time as was fair and reasonable taking into account the occurrence of any relevant event.” 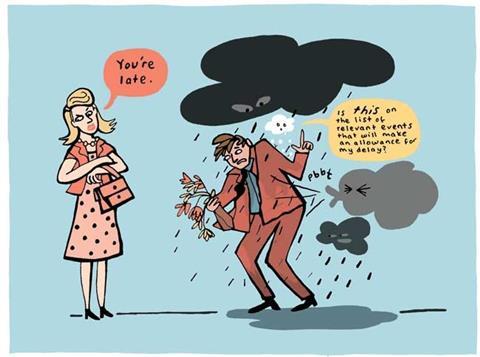 Just detectable from the judge is a weary reminder that it was exactly 100 years ago that the English Court of Appeal rejected the proposition that delay caused by a contractor must be taken into account. Carloway said: “It is irrelevant so far as the contractual exercise is concerned … That exercise does not involve an analysis of competing causes.” The key point for this judge was whether a relevant event was likely to have an impact on the completion date as originally provided or subsequently altered by earlier relevant events. “But the exercise remains one of looking at the relevant event and the effect it would have had on the original (or already altered) completion date. If a relevant event occurs (no matter when), the fact that the works would have been delayed, in any event, because of contractor default remains irrelevant.”

So it appears that the relevant event should be investigated to determine whether it was likely to cause delay to the works beyond the completion date. If the answer is yes, the judge is not interested in the contractor’s own delays. “What the architect must do is concentrate solely on the effect of the relevant event in the absence of any competing default. If he decides that it was likely to, or did, cause a delay beyond the completion date, he must fix a ’fair and reasonable’ new completion date having regard to what he estimates to be the delay caused by the relevant event.” One of the other three judges thought apportionment might apply (see below). Controversial? You decide. Oh, by the way, Shepherd Construction was the successful party.