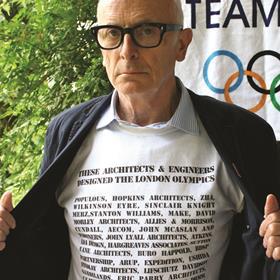 About a year ago I was working with Andrew Scoones of the Building Centre Trust charity to put on an exhibition about the Olympic buildings during the Games. We had long and positive discussion with Locog design director Kevin Owens but after several months a response came from the organising committee’s legal department saying we couldn’t do the show because of the “No Marketing Rights Protocol” (NMRP). This was the first time I had come across the NMRP. I thought the document mean-minded but if architects and suppliers had signed the contract, so be it.

Then, in December, David Cameron gave a speech which he has repeated many times since about how UK Plc must ‘make the most’ of the business opportunities of the Olympics. With the NMRP fresh in my mind I wrote a letter to The Times asking how on earth businesses could do what the PM was asking with one hand metaphorically tied behind their backs.

The response was astonishing with architects, engineers and telecoms suppliers, getting in touch, emailing, tweeting to complain about the restrictions. Building picked up the cudgel with its first issue of the year and the authorities started to take notice. David Cameron agreed to intervene; John Armitt, initially dismissive, came round to the idea that the ban should be lifted (but only after the Olympics were well and truly over). Tessa Jowell MP asked questions in the house, highlighting the Building 2012 campaign.

The topic was raised at MIPIM with Olympics minister Hugh Robertson - who seemed to think it was a storm in a tea cup - with the then chair of the Legacy company, Baroness Ford, who initially said the restrictions should be lifted but later retracted. One minister I spoke to said that his civil servants had advised him to tell suppliers to ignore the protocol.

In recent weeks both RIBA president Angela Brady and Institution of Structural Engineers president John Nolan have supported the campaign to lift the ban and in turn have been joined by Cabe and the new Legacy chief Daniel Moylan. I wore a T shirt with names of architects and engineers involved with the Olympics to the British Business Embassy at Lancaster House and appeared that evening on BBC London news. The story was picked up around the world .

But despite all the pressure, Locog resists resolving the issue with any haste. It defends its position by saying that architects have received plenty of publicity about their designs (certainly a few of them have) but I am surprised that, while it is so steadfast in its defence of its sponsors’ branding and marketing interests, Locog does not seem to understand what marketing actually is about. Marketing is not about a bit of PR - it is about being able to focus on those markets and clients that are relevant to your business, to be able to contact them directly in a variety of ways and putting your case to them.

Sponsors I have spoken to have no issue with architects and engineers being able to gain due credit for the work they have carried out, indeed in many sectors designers are used to enhance brands (as Coca-Cola and its Olympic Beatbox pavilion are doing by promoting architects Asif Khan and Pernilla Ohrstedt).

Worryingly though, I hear that sport fundraisers rather like the harsh rules that have been put in place and would be loathe to lose them for future major events.

The government doesn’t think it can get the ban lifted before 2013. If the prime minister is serious in exhorting business to make the most of the Olympics, he should insist Locog abandon the NMRP now, while firms can still benefit from the brilliant glow of the Games.