This week we witness the calm streets of Bogotá after the colourful student protests, while Balfour Beatty Engineering Services pulls back from the brink to negotiate with picketing electricians

Bogotá may not be the first destination on construction companies’ list of target markets, but I’m reliably informed the Colombian capital is teeming with opportunities for eagle-eyed firms.

And so it was that one of my hacks ventured out to survey the market. But the best story he came back with had nothing to do with construction. At a glittering drinks reception at the British deputy ambassador’s house in the city he shook hands with a diminutive, charming fellow he presumed was a local business leader. Only later was he told by fellow guests he was none other than the man who “ordered the killing of (infamous drug lord) Pablo Escobar”, the former attorney general of Colombia. Not a typical contact it has to be said.

Another point of note from Bogotá was the peculiar abundance of rainbow splats of paint on many of the public buildings in the centre of the city, my foreign correspondent tells me. The remnants of hundreds of paint bombs was in evidence on Colombia’s Congress building, its Cathedral and many police stations and corporate offices - evidence of student protests in the city a couple of months prior to my hack’s visit. I’m all for a splash of colour in our cities, but perhaps a clean-up operation is now in order?

Following last week’s sad news on the closure of the renowned ABK Architects’ UK operation after 50 years in practice, Hansom was delighted to hear that the firm’s archive has been donated to the RIBA. I hear that the collection is now part of the RIBA drawings and archive collection, which is housed at the Victoria & Albert Museum. Intriguingly though, the archive is missing a few bits and pieces relating to ABK’s Moscow Embassy, which opened in 2000.

Embassies are, of course, highly sensitive buildings and the Foreign & Commonwealth Office was apparently keen to take ownership of certain items from the archive which it did not want falling into the wrong hands. While this move means that the public can, for now, see only a portion of the designs for the embassy, it does leave open the possibility that the additional material will eventually turn up at the National Archives at Kew. 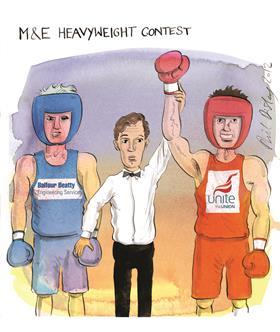 And the winner
Five months, two strike ballots and countless protests in the heavyweight M&E sector have led to … what exactly? Balfour Beatty Engineering Services - one of seven firms proposing controversial pay and conditions changes for its workers - has stared down the barrel of nationwide strike action and flinched. The firm will return to the negotiating table with union Unite in order to try and negotiate a compromise.
This column is concerned this could be curtains for the firm’s until now promising relationship with trade federation the HVCA. The two organisations were the principal architects of the wage proposals and have been getting along well. Could this relationship be another casualty of the fiery dispute? Thankfully I’m not a betting man.