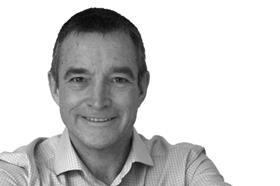 A profit margin of 0.5% is terrible. Or so people are oft-quoted as saying. But saying something doesn’t make it so.

If you are paid £50,000 each year by your employer and your bank only pays you £100 interest for lodging your money with them you don’t complain about the pitiful 0.2% rate. You understand you don’t earn interest simply by cycling cash through your current account.

Exactly the same applies in business – you don’t have the right to take a fixed slice out of every pound that passes through the till.

The ‘low margins’ that we see in the headlines in Building and elsewhere are Return-on-Sales (ROS = profit/sales), which is a bit like the interest/current account deposits related in the example above. Mathematically correct, but pretty much irrelevant.

You earn profit because you invest money. Financiers and the UK government understand this, which is why they assess profitability using Return-on-Capital-Employed (ROCE = profit divided by the amount of money tied up in the business).

Contractors take negligible up-front risk. They have no factories to build, no new products to develop, no raw materials to buy. Such companies will only commit to most of their cost after receiving an order and very quickly they become cash positive. The main risk contractors take is signing up to a bad contract, and this is 100% in their control – it isn’t like a retailer buying stock no one wants to buy.

And if we look at the ROCE of contractors, we get a very different picture of the profitability of construction. Take for example Mace. 2016 was a bad year for them, with several problem projects dragging their ROS down to 0.5%. But ROCE was still a healthy-looking 15.8%.

Whichever way you look at it, construction looks like a profitable business to be in, so long as you don’t allow ROS to distract you.

Can we stop talking about low margins, and move on to some of the more important things we need to address? Such as why construction would want to follow the lead of manufacturing, one of the least profitable sectors of the UK economy over the past 20 years?

Far too often we hear the ‘battle cry’ in construction that manufacturing does things better than us. Many argue that if only we had more automation, digitisation, or make more of our projects in factories and simply assembled them on site, things would be a whole lot better. To say nothing of the so-called ‘productivity problem’ we have, they say.

This is far too simplified an approach and risks taking the industry down the wrong route.

It’s not that these things are not potentially good ideas, but in focusing on them so slavishly the industry risks taking a far too broad-brush approach in trying to do things more effectively and achieve the improvements it seeks.

I can’t see the shareholders of construction companies thinking the industry is better, if all we do is reduce ROCE profit margins to the levels achieved in manufacturing!

Ian Heptinstall is an independent consultant in project management and procurement