No flagging: progress on the Lea Valley Olympic venues 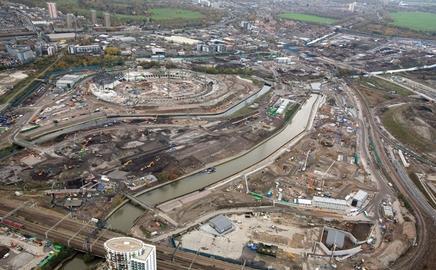 The Olympic project is racing along

The two prime sports venues for the 2012 Olympics are surging ahead in east London’s Lea Valley with more than 200 people now on site, writes Martin Spring. Five months into construction, the £303m aquatics centre is racing to catch up with its larger sibling, the £496m stadium, which had a two-month headstart.

At the aquatics centre, for which Zaha Hadid is the architect and Balfour Beatty the contractor, the concrete roof supports are beginning to appear courtesy of AJ Morrisroe, and more than 500 piles have been drilled 25m into the ground. Next year, the 2,800-tonne steel roof frame will be erected. The completed building will contain two 50m swimming pools, a 25m diving pool and seating for 17,500 spectators.

Across the river, the HOK Sport-designed stadium is taking shape under Sir Robert McAlpine’s direction. The 40m-tall steel rakers that will support the 55,000 temporary seats in the upper tiers are being erected. Below that, 200 concrete rakers and 12,000 terracing units are being precast and installed for the 25,000 permanent seats.

Both buildings are due for completion in 2011. Before the sites were handed to their contractors, ground clearance works were carried out over the whole 2.5km2 Olympic park, including demolition, excavation and soil decontamination.