Refusing to pay an adjudicator's award: Dicing with disaster

Berry Piling Systems agreed the contract with Sheer Projects for secant piling. The sum was £160,000. The start date 20 January 2011. Soon water leaked through the piles. The main contract fell into 11 weeks’ delay and Sheer blamed all that on the piling contractor. Unsurprisingly, Sheers stopped paying Berry the money otherwise due. Berry said it was not to blame for the water problem, or the 11-week delay. “Yes you are”, “No we’re not” … all the usual mud-slinging went on. Ideal for a 28-day rummage. Ideal for deciding whether Berry or Sheer should have the cash until sorted out later.

So here we are playing snakes and ladders for £21,000. Is it worth putting more thousands on the table for that modest sum?

The adjudicator soon did his stuff. He ordered Sheer to stump up £21,000 to Berry. Sheer didn’t like that idea (the loser in adjudication never does like the idea of forking out). So it decided not to obey the adjudicator’s order. By now, the date reached was December last.

It’s at this stage that a sort of parlour game begins. Dice are thrown. Sometimes you go up a ladder, sometimes you go down a snake. Always the game is expensive. So here we are playing snakes and ladders for £21,000. Is it worth putting more thousands on the table for that modest sum? Last week, the parties were in court. Berry wants its award for £21k enforced. Sheer is arguing for a torpedo.

Sheer ran two familiar points. First, it said Berry would never be able to pay Sheer back once the coming arbitration made a decision opposite to the adjudication. Second, it said that the adjudicator had dreamed up an argument of his own, not put that dream to the parties and that his award was void.

It turned out that the adjudicator did think of a very good reason of his own why Berry should win. Worse, he did not put his reason to the parties. But his award still went to heaven. It’s curious about writing an award as the adjudicator; there is almost a rush of enthusiasm to cover all the ground. All of us adjudicators do it. We dash off all the reasons why the result should be this or that.

It’s curious about writing an award as the adjudicator; there is almost a rush of enthusiasm to cover all the ground. All of us adjudicators do it

In this Berry case, the adjudicator is very experienced and well respected and he too has dropped into this “showing-off” mode. Truth is that his award came out against Sheer because of a collection of reasons, one of which only was his. The others were those argued by the parties and which he decided in favour of Berry. For example, he said that Sheers’ case hadn’t advanced a proper analysis of the delays and consequences. It then didn’t matter that the adjudicator had advanced another reason of his own.

But let’s try to coax adjudicators to stick to the case put. Yes, yes, there might be a compelling reason that will swing the case a different way. So if you must take up your own idea, put it to the parties. It might actually be revealed as half-baked or even already agreed between the parties as not correct. In short, mind your own business.
Sheer was also fretting about the ability of Berry to repay the £21k once an arbitrator finally decides the case. The judge in the High Court considered Sheer’s application for what is called a “stay” of the adjudicator’s award but refused. Dunne & Bradstreet, the credit rating agency, put Berry in the high-risk category. But its recent management accounts showed modest profits being made. So the judge would not order a stay. Berry gets its £21k ordered by the adjudicator. An arbitration notice has now been served by Sheer; the judge reckoned it would be 18 months before that arbitration decides the case once and for all. Actually, arbitration these days moves much quicker than that.

Meanwhile, Sheer has to pay not only the £21k but another £13k to Berry for its legal costs and its own legal costs, which are probably another £13k. Snakes and ladders at this level is expensive. 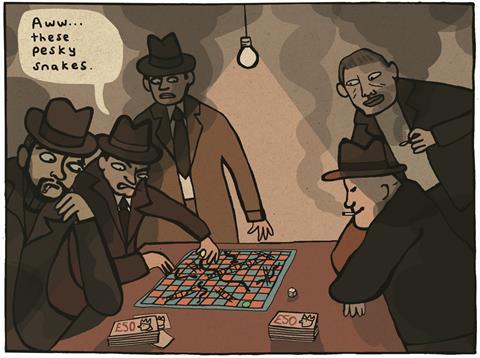