The G3 summit: How much trouble are we in and how do we get out? 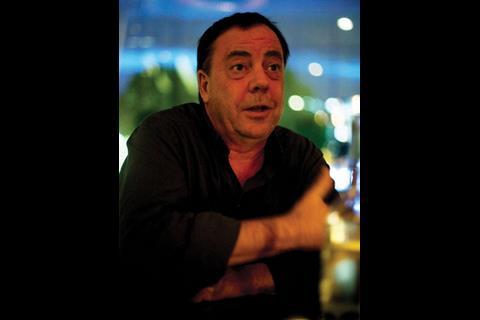 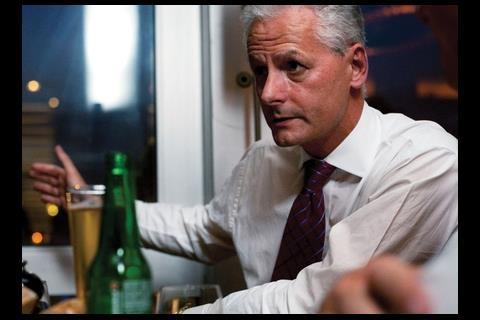 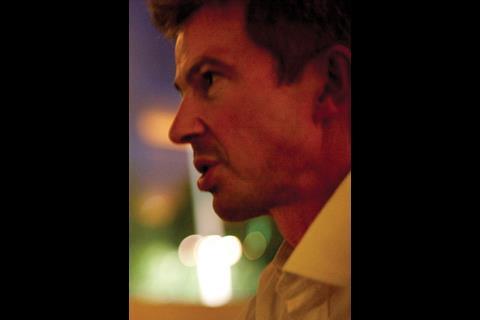 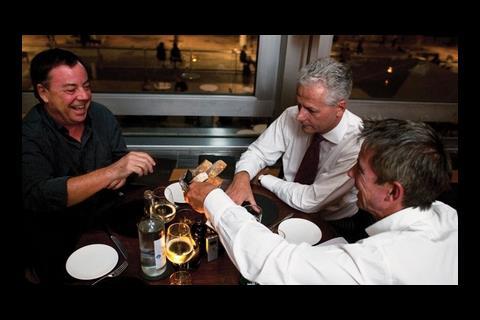 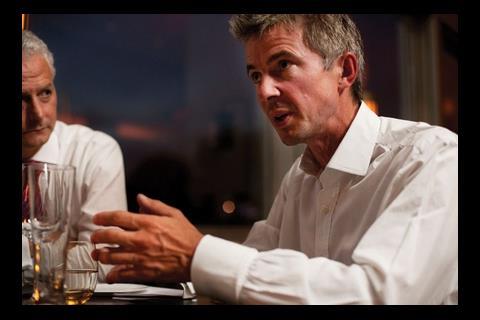 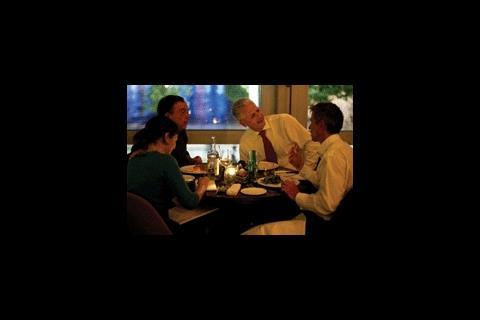 At this point in the business cycle we have at least some idea of what the recession has done to consultants, and how they can regroup and fight back. Three QS leaders comment

In the past year, Britain’s top cost consultants have been through the wringer. Most firms have cut staff by 10-15% and all have carried out one arduous round of cost cutting after another. At the same time, clients like Tesco have imposed hefty fee cuts, Dubai has turned into the land that accounts payable forgot, and the public purse is as empty as a politician’s promise. Oh, and then there’s the question of reinventing the whole notion of what a QS is and does once the recession is over.

As the bosses of the top consultants steel themselves for another year, Building got three of the biggest together for a discussion – and a bite to eat. This is what Jonathan Goring, managing director of Capital Symonds, Richard Steer, senior partner in Gleeds and Philip Youell, chief executive of EC Harris, had to say:

How worried are you about job cuts?

Jonathan Goring: Being blunt, the first cut isn’t really a problem because companies have a tendency to lose people who aren’t fully used. But organisations are now cutting good people and losing whole chunks of skill.

Richard Steer: I don’t think that is such a worry for QSs, although you’re talking to three of the bigger players. Smaller QSs are facing the same issues.

Philip Youell: I come from outside the industry and what surprises me is that we haven’t seen that many business failures yet. Professional services typically don’t have large amounts of debt and the capacity to pull in the belt means we haven’t seen failures.

At EC Harris you paid out £2.6m in bonuses this year. Is that the right thing to do in the current market?

Philip: It’s part of attracting talent and encouraging the right behaviours. It benefits the clients and it pays for itself. One of the tendencies for firms is to cut the things that make a difference and create a sense of who you are. Inevitably we’ve had questions about whether we should retain the free bar at ECHQ, for example. If you see it just as a perk that’s one thing but if you see it as part of a culture then it makes sense. It’s the little things.

Richard: It actually depends on how someone’s remuneration package is made up. The word bonuses is an emotive word at the moment but in the right circumstances, particularly given we have had salary cuts, if there are ways to get people’s pay back up through bonuses, we will. That was always an integral part of the agreement.

Jonathan: We are also paying bonuses because there are parts of our business that are booming. If someone wins £20m in fees for us, that person needs to be rewarded.

There has been a lot of debate about the merits of salary cutting versus redundancies. EC Harris hasn’t cut salaries while Gleeds was one of the first. What’s the best way?

Jonathan: For us, a lot of it comes from the staff. Some of our guys have said they want to take salary cuts rather than have people lose jobs. In our transport planning business, they have a four-day week.

Philip: It is difficult – but if you engage with your staff you do come up with answers. Salary cuts were considered but we were able to find cuts elsewhere – whether that will be enough …

Richard: That’s the point, isn’t it? We’ve got through this year but it all depends on how 2010 ends up. We wanted to retain staff to provide a quality of service. There were also one or two clients talking about fees. It was a way of retaining staff and morale. And in London, salaries had become inflated.

Jonathan: The government has to be a bit clearer. Crossrail looked like a sure thing and that’s no longer the case.

Is client behaviour getting worse?

Richard: Some people are saying everyone’s cutting fees. But some of our partners have said that if the client likes you they’re not going to make too much fuss about it.

Philip: But Richard, I’d say that what we’ve seen happening, particularly under Buying Solutions [the long delayed Office of Government Commerce framework for the public sector], is a concern and a worry.

And then there are the clients who talk to you about renegotiating contracts. Some do that for the right reasons and you can work with them. Others will take advantage, and that stops you delivering what they’re trying to buy. If the relationship is based on “how low can you go”, that’s not going to drive value. And if you drive down price, the only thing you can do is cut salaries, cut salaries, cut salaries.

Richard: Some of the time the clients don’t actually know what they’re asking for.

Jonathan: I was just about to say that. Some of them are faceless organisations. We’re seeing it in some companies where there’s an arbitrary move to cut 15%.

One tendency is to cut things that create a sense of who you are. Inevitably we’ve had questions about the free bar

Will the recession create a permanent shift in the consultancy sector?

Richard: I agree. Construction has been through 100 recessions. It might come out a little bit tweaked or jaundiced but basically the same.

Philip: I’m not sure about that. I do feel a sense that the demand is increasingly for an answer to a problem, not a service. So we have to become specialist or be integrated by connecting with other organisations or bringing new skills in. It’s no longer adequate just to bring a technical skill.

Richard: But Philip, that’s quite a UK thing. There are countries that are still looking for us to churn out quantities.

Philip: That’s true but it can change quickly. Arguably the demand in the next five years will not be for construction. I think the focus will be on how you can manage and how you can create value from assets.

Jonathan: One thing we’re going to see a lot of in the next year is acquisitions. All of us here are probably on the lookout. But my big hope is that at some point we can start influencing the behaviour of clients. The fact that three of us are sitting here tonight is a good thing. We are three competitors but we probably have similar feelings about the industry. There have been some good clients in the past, like BAA …

But of course BAA is changing tack …

Philip: Organisations can get used to the way things are and tougher circumstances can help us focus on new solutions. The skill will be making things better without trashing what good has been done. Steve Morgan [BAA’s capital projects director] has been around long enough to do that.

Richard: We have to follow clients as they go up and down with the economy. We’re going to see more people moving to competitive tender, which has its problems. Then more work will come through, fee levels will come under pressure and clients will say let’s work together. So it goes round and round.

How vulnerable is Crossrail?

Jonathan: We need to go back to the business case and see if it’s the right thing. It probably is but that doesn’t necessarily mean it will happen. The sad thing is that now is the best time to build anything. I’ve just built a house and it was wonderful because everyone wanted to do it. It came in two months ahead of programme.

Richard: Public expenditure is going to slow whichever government is in power. And there’ll be a lull in commercial activity while people assess what it looks like. Even with Building Schools for the Future everyone’s waiting to see what happen.

Philip: It seems to have become a political issue; it’s not about what’s best for the country. We should look to Abu Dhabi: it’s taking the long view – seizing the momentum to deliver in the long term.

Do you subscribe to the idea that consultants will become decentralised and operate from global centres, rather than being UK-dominated?

Jonathan: No. We have hundreds of people overseas but they’re all directly employed by us from the centre. Local employment can be a big issue. In some European countries if you want to make someone redundant it’s a big issue; you might as well pay for them until they retire.

Richard: We’ve got a different philosophy. We’re expanding globally and we have indigenous companies responding to local markets. That means we learn a lot about the industry in other countries, which can bring lessons back to the UK. I think wholly owned companies responding to their markets wherever they’re operating is exciting. The other thing is architects get taken around the world by clients. They won’t ask Zaha Hadid about her experience in the country, but the first question we get is: how many jobs have you done like this here?

Philip: I understand what Jonathan is saying but what we find is project delivery brings opportunity. We see projects as platforms. When you get established in a country, you can go out of the major cities and that creates opportunities with other clients. We’re looking to create four countries where we have knowledge and can create capacity.

You’ve had experience of unpaid debts in Dubai. Will they leave a permanent scar?

Philip: People wiser than me say it’s the same as last time, just a bit bigger. I have to say the government has responded well. But will other firms go in and make the same mistakes? Of course. There may be a good reason, but it can go wrong quickly.

Jonathan: For a business that makes £10m a year, you can easily lose half of that in one project if the terms are right. We think really hard before we go abroad. We take everything to the board and we go through it with a fine-tooth comb. The estimated margins on an international project have to be considerably higher. We won’t do any project outside of Europe that doesn’t achieve gross margin of 45%.