The ICE Conditions of Contract: An old friend

The ICE Conditions of Contract has been spruced up and given a new name. It may be no more fathomable than its precessor but at least it won’t bite you where it hurts

The ICE Conditions of Contract is an old friend. Just like JCT is really an old friend. ICE for civils and JCT for buildings. Just over a year ago there was a fuss. The Institution of Civil Engineers booted the 65-year-old friend out. I told you about it here (17 September 2010). And I said how the new love of the ICE was that NEC document so, “like it or lump it”, I said, that’s that for the old ICE form. I was wrong about lumping it. The Association of Consulting and Engineering (ACE) and the civil engineering Contractors Association (CECA) spoke up. These two influential folk have taken in the old document, spruced him up, given him a lick of paint and a new name, and had the odd cross word with the ICE. Now say hello to the ICC - the Infrastructure Conditions of Contract. It will still get called the ICE form, because that’s the way of things. Well done, ACE and CECA. In short it’s no longer an ICE animal, it’s an ACE & CECA publication. It’s actually our old friend with a new name. Hurrah.

Use any standard form with fiddles and fancy amendments and you are already heading for someone like me. The disputo-maniacs adore your tampering because it brings the bacon home

Look, here is a truth; no one, absolutely no one understands building contract documents. They are a blizzard of bumf. Name any of them … JCT, PPC, Prof Services, NEC, ICC, FIDIC, NOMS, DOMS, Intermediates, Minor Works, and on and on … all rank with big fog factors. The lawyers love them; the love of my life is the NEC stable, arguably the best money spinner for arguers up and down the land. So, I say again, no one understands contract documents, not even the lawyers. That’s why there are arguments. What chance my plasterer and drain layer friends?

So, how come I call the ICE’s ICC form an old friend? How come that the top engineers in the ACE and how come the civil engineers that do the actual road and bridge and drain building want to keep this old friend? It’s certainly not because they can fathom the true intentions of the clauses and sub-clauses. No, no, it’s because over the years their bum remains unbitten. When these folk are told that this document applies to a building or civil engineering contract, they flag up, almost unconsciously, a comfort zone. The ICC is a comfort zone. And I tell you this, the first bloke or lass you need to make comfortable if you are representing the customer, is the contractor’s estimator. He gets a great lump of stuff to somehow price competitively. True, he doesn’t ask first off what the contract document is; instead he asks himself who the customer is and what the customer’s reputation is made of. If it is a rotten reputation, he still bids the job, but he doesn’t want it. The pencil is blunt, the guesses high. None of that is unconscious. If the reputation instead gets an ok tick, he then glimpses at the intended contract document. That’s where the old friend wins hands down. The estimator thinks of his unbitten bum. The rigmarole in the ICC is whatever the hell it is, but he knows the firm has been here before with the same form year in decade out. The ICC has got form, got history, got friends.

Look, here is a truth; no one, absolutely no one understands building contract documents. even lawyers. They are a blizzard of bumf

The looney-tunes who fiddle with the contract form ought to blink at this point. It simply doesn’t matter what the fiddles are (yes, yes, call them amendments), I can vouchsafe that not only will you still get a price but you will be up for a relationship with a contractor who is already watching you like a hawk. Don’t even think about all these fancy ideas of co-operative working or mutual trust; the estimator already thinks you are a twerp and so too do his colleagues who actually dig and build. Do you know that none of the team actually wants a contract with a mutilated standard form, no matter what badge it bears? Use any standard form with fiddles and fancy amendments and you are already heading for someone like me. The disputo-maniacs adore your tampering because it brings the bacon home.

The Institution of Civil Engineers made a mistake when it dumped our old friend. The ACE, the enterprise with all those consultants capable of choosing the contract form, has seen the light; so too the Civil Engineering Contractors. Brilliant arrangement and so simple: a form of contract, a set of rules that is so well known and consultants who stop short of fiddles and contractors who “feel” comfy. It stops them looking over their shoulders or through their legs at their bum. The ICC form doesn’t bite (or so they say). 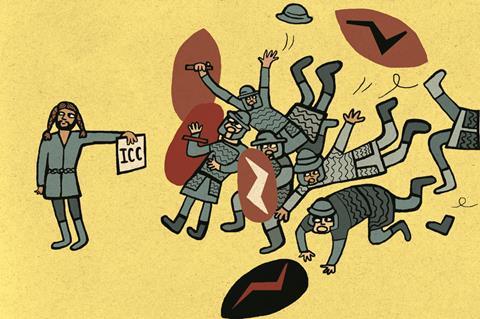